What's the Tour de France got to do with towpaths?

It’s the Tour de France (yay!) and two weeks ago, because our comms team have got there finger on the pulse they gave me a shout. “Everyone will be going cycling mad, so it’s a good time to promote Share the Space, Drop your Pace – do you want to write a blog?” “ Yes!”, I say … because it’s a great idea and I’m always flattered to be asked to do such things.

Dick and friends about to set off

A few days went by and as I was on a train back from a visit to the Huddersfield Narrow, I opened my laptop, updated a spreadsheet or two, answered a few emails and turned my mind to the blog … and the tour itself. Seems appropriate, really, the last time I was in Huddersfield I was doing the tour myself …

Well, now, hold up there for a moment. Obviously I wasn’t competing. I love cycling to bits, but let’s be honest I’m more “St.Bernard” to the Wiggo’s whippet-like build and what took Chris Froome four hours took me 14. I wasn’t in the race, or any race for that matter but like many others I rode the first two stages, with friends, for a charity. I’m massively proud I did it, but it’s really, really hard (to say the least) and I’m still not sure I’ve fully recovered to this day. And that was two years ago. 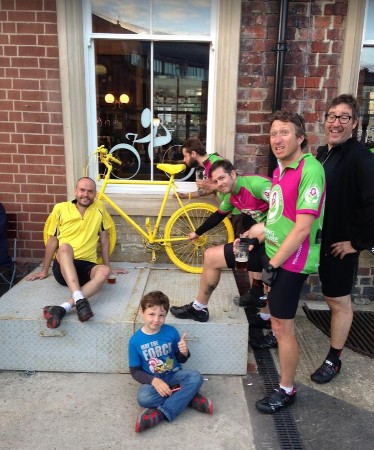 Nor for that matter has Yorkshire, of course. There are still yellow bikes hanging up on many street corners, a now yearly regular 'Tour de Yorkshire' that thousands take part in and even in sleepiest places, you’ll usually see someone on a bike these days. Most pubs now can offer a bike pump with your pint and pork scratchings too, and like everywhere else in the county, more people than ever are using two wheels to get fit and – more often than not - find new places too.

If they’re lucky, of course, they find a towpath and an increasing number do. It’s one of the big reasons that canals are now more popular than they ever have been. It’s a big change and this, along with the fact that more people than ever want to go boating, fishing, canoeing or take a walk to a picnic spot, means that the Trust has got a bigger job than ever. We’ve got lots of new friends and we need to entertain!

Thankfully, there’s some help at hand and as more people go cycling, more opportunities come up for funding schemes that improve towpath improvements to meet the demand. This is nothing new, of course, it’s something that’s been happening for years, but what is new is that we’re now seeing more opportunities in new places not just London and Birmingham. It’s a much needed life blood for derelict towpaths as the vast majority of our funding is focused on our prime objective, the wet bit - the navigation itself.

So that’s why I was retracing my Grand Depart steps … to look at the towpath and chat with our expert engineers about what improvements we can make and share some of the things we’ve learnt from other improvement schemes we’ve done in the past too. It’s all about making sure improvements are for everyone and not just cyclists, of course.

In London, in particular, we’ve seen years of growth in cycling and benefits from the investment are clear to see. Most of the new towpaths you see have been funded that way. But the benefits are not just on the ground … we’ve also taken the time to learn about what people want from their towpaths and we built the Better Towpaths for Everyone policy around this. The consultation on this had nearly 3000 people respond, a big amount for any sample of opinion, so along with 16 national body endorsements (including British Cycling, The Ramblers and IWA) we can feel sure it’s a good reflection of how folk feel.

It actually comes down to three things people said they wanted – better infrastructure, better signage and better behaviour – and the policy sets out how we’ll go about it. All of these things are dependent on each other, of course, but all of them, folk tell us, are important.

Better infrastructure is the expensive one, obviously. Concrete, piles, towpath dressings and large scale vegetation management can be costly and any changes to much-loved towpaths can be controversial too. We’ve come a long way on this, however and we think we’ve learnt the right way to go about this kind of improvement. You can read a bit more about how we do this from the expert, my colleague Antonia in this great video.

Signage is much more my thing and in the last year we’ve put up pedestrian priority signs up in the busy places. We’re also doing more to help people find their way around (an art we like to call 'wayfinding') and in particular we’re doing what we can to sign post alternative routes to towpaths too. This is especially important around popular commuter routes where it can get busy at peak times.

The big and difficult one, however, is better behaviour. Whilst the evidence is that the vast majority of people are considerate to each other on towpaths it's certainly the case that there are a few not-so-considerate people out there too.

This is why we’ve created the Share the Space, Drop your Pace campaign, which we promote on towpaths all over England & Wales. It’s a little reminder to everyone to be mindful of each other and whilst, it might take a while - behaviour change campaigns, like Clunk Click, Every Trip and Don’t Drink and Drive to name a couple can usually take 7 to 10 years to have any effect - we’ve been getting a good response and we’re sure it will work over time.

But let’s get one thing straight – it’s not just about speeding cyclists. Sure haring around like you’re on the Tour de France on a towpath, or any shared space for that matter, is unacceptable. It’s anti-social. It’s anti-social behaviour, in fact, like graffiti or fly tipping. Or just leaving your fishing kit or boat engine parts out for others to trip over for that matter. All of these things, and many others, can be at best daft and at worst fatal, so it’s up to everyone to use common sense and Share the Space, Drop your Pace. That’s the point.

Our job is to make sure towpaths are for anyone to enjoy but everyone can play their part in this too. So this month, whilst we’re all watching our heroes on their bikes, follow cyclists, let’s take the lead. No towpath is a tough climb like Alpe D'huez and even KOM at Caen Hill would be a pretty hollow victory. Whilst we should feel free to enjoy the Tour de France by a canal (sitting on a bench via a quiet radio and headphones) if we have the urge to race …. let’s do it somewhere else and help the towpath preserve the leisurely pace they’re designed for.

Find out more about the Share the space, drop the pace campaign.

Our guest bloggers all have a passion for our waterways, whether they are volunteers, staff or the experts we work with.