Bond on a boat

If you're going to see Spectre this month then look out for the Regent's Canal. Cassie Clarke, our filming and campaigns executive tells us how the historic waterway made its way into the latest Bond movie.

Today the latest film in the 007 franchise ‘Spectre’ was released in cinemas all over the UK. Almost a year ago I was contacted by a location manager looking for a watery underground location to use in the forthcoming James Bond film and fortunately, we had just the right place for them.

A hidden away spot called ‘Dead Dog Basin’ in Camden underneath the grade II listed Interchange building which now houses the Associated Press offices, it was once a storage warehouse with an underground dock in Victorian times.

The canal location was going to double as a hidden entrance from the River Thames to Q’s top secret underground workshop. Although they were filming on the canal they would use large SFX screens to make it look like the River Thames outside MI6 – you would never guess it was filmed on the Regent’s Canal in busy Camden on a cold December’s day just before Christmas.

The film crew spent three weeks transforming the damp basement and underground basin, building a jetty, installing lighting and creating a set made up of red brick tunnels inside the expansive basement. Because the building is listed everything had to go through our heritage advisor Florence to make sure they wouldn’t cause any lasting damage to the building.

On the day of filming a huge film crew descended on Camden, there were paparazzi everywhere waiting for the moment when Daniel Craig would emerge from Dead Dog Basin on his high speed RIB (actually travelling at 4mph like all the other boats on the canal), they shook smaller boats to create the effect of waves on the Thames in the still canal water.

Staff from the London customer operations team, Stewart Qureshi and Tim Mulligan, assisted boaters through the locks and kept things on the canal running smoothly. 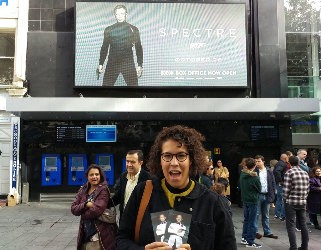 Yesterday I attended cast & crew screening at Leicester Square Odeon, it was an early start for a Sunday as the film began at 10:30am. It was really busy (I had ticket number 700!) and the director Sam Mendes got up before the film to say a big thank you to everyone who had been involved in the film. I really enjoyed the film and it was really satisfying to finally see our location on screen, even if it was only for about 20 seconds!

Filming location hire at Canal & River Trust is going from strength to strength and all the income we generate from filming is spent on caring for the waterways.

We have over 2,000 miles of fantastic outdoor locations to choose from – from towpaths to locks, world heritage sites to nature reserves

Our guest bloggers all have a passion for our waterways, whether they are volunteers, staff or the experts we work with.