Tramways: a long forgotten mode of transport lost from sight

Although they have left few visible remains, horse-drawn tramways were once vital for linking waterways to mines, quarries, lime and other mineral works. In the late 18th century they were viewed in some quarters as a threat to canals and the Duke of Bridgewater referred to them as ‘those damned tramways’. But by the 1800-30 period, when they were built in large numbers, tramways and the canals they fed had become an early example of integrated transport.

Up and down the country, industrialists and canal companies built tramways. Significant examples, often with inclines, fed the Kennet & Avon, Chesterfield, Derby, Mon & Brec, Stratford on Avon, Llangollen and Cromford canals and there were many others. These tramways were typically constructed with iron rails mounted on stone blocks and their rolling stock consisted of crude wooden wagons with iron wheels, pulled by horses. 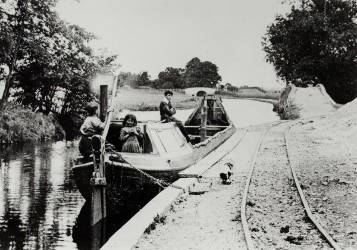 By the mid-19th century horse-drawn tramways were being replaced by steam railways and today their remains are usually little more than archaeological sites; grassed over ramps and inclines or occasional sunken tracks crossed by small bridges.

A notable exception is Bugsworth Basin, on the Peak Forest Canal. This is the most complete canal and tramway terminus in Britain and was once a busy hub for transporting limestone and burnt lime. Elsewhere, a keen eye can occasionally spot former tramway rails cut up and bent into stop plank racks, especially on canals once owned by the Great Western Railway.