I have just spent a week by the Oxford Canal. Everyday I walked the same stretch of towpath from Jericho, at the heart of Oxford city’s canal history, upstream for several miles, and back.

Stepping out briskly I could have covered the distance in an hour or less, but I had another idea. I set out to walk each day with only one rule, to do no more than walk and to notice. To take time and let any of my five senses dictate where I slowed down, or backtracked for a bit, or stopped to stand or sit.

As hunter-gatherers our ancestors’ crucial skill was the ability to walk whilst fully immersed in the world around them. Walking using all the senses was a way to observe ripening seeds and fruits, follow the ways of animals to be hunted or avoided, sense the patterns of weather and seasons, pick up stones and sticks that would make tools, feel a way through their interactions with other humans who might be competitors or allies. I wanted to know if the combined ability to walk and notice was still part of our DNA.

A canal seemed a rewarding laboratory for the experiment, a modern equivalent of the hunter-gatherers’ world. A towpath is part nature, part man-mediated, balanced between creeping wilderness and human intervention. It’s accessible, doesn’t need clever route-finding, isn’t drowned in traffic noise, and above all, the odd cyclist or speeding mallard apart, life still moves at walking speed.

I walk in the early evening and immediately fall into the familiar and habitual. Birdwatching. I stop to listen to a cock blackbird singing from a hawthorn. Quarter of an hour passes in thoughtlessness. Thoughtless is good, in this experiment. I stop again to watch a bachelor party of mallard drakes who one after another splash-jump and scrabble up the bank onto a boardwalk at the end of a garden to settle down and tuck their bills back under their wings, becoming three colourful rugby balls in shape.

Gulls flying high above me are following the waterway in all its straights and turns. I wonder if they use it for navigation. Back on the edge of Jericho, I see something small and dark hunched in the grass by the towpath. A rat, I think, as the shape scuttles to the water. I hear a small splash and briefly see the animal swimming before it disappears. It’s not the doggy paddle of a brown rat but the practised sculling of a water vole. They’re making a comeback along the Oxford Canal but I wouldn’t have expected to see one so close to the city.

Find a slow walk near you

Evening, again. My attention is caught more by the human life than the wildlife today. The houses along the far bank catch my attention. Gardens running down to the water. Writing sheds. Benches. Barbecues. The canal is part of each property, and all in different ways, but none ignore it.

There are fleets of small boats ashore or moored. Impulse purchase blow-ups, derelict rowing boats, smart skiffs, the aspirational and the practical. Only one boat is being used. A woman is rowing a small boat I’d seen moored at a jetty a mile away the day before. She stopped for a while, the boat drifting along under its own momentum, as she looked dreamily up into the towering ash and willow trees hanging over this stretch. She seems to be rowing like I’m walking. 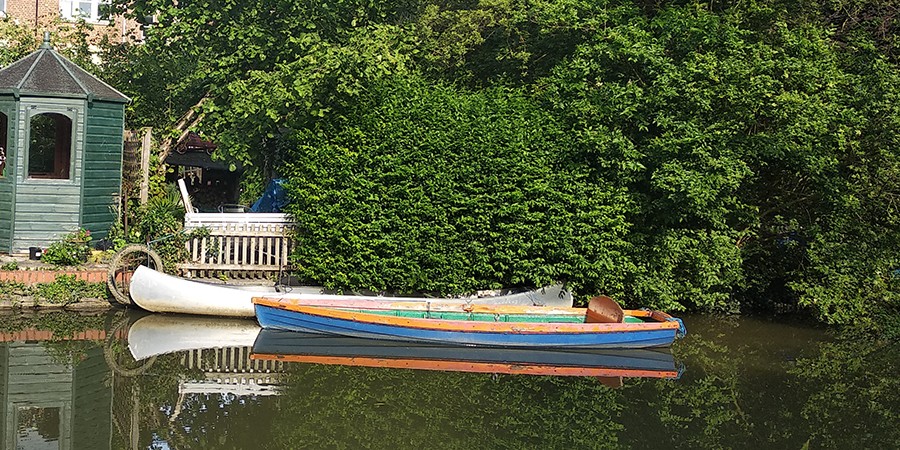 A late afternoon stroll into evening. I recognise several purposeful commuters, bags over their shoulders, some in suits, from the previous days. Couples are lost in conversation; or in their phone screens. There are dog-walkers being pulled by or pulling at leads. Narrowboats on permanent moorings against the far bank show all the signs of home making; the accumulation of fuels and outdoor furniture and ropes and boxes along their roofs.

Boats on the near side visitors moorings, have picnic-type meals laid out, excited dogs, and less clutter from everyday life. Several crews are outside in the warm weather drinking wine or beer. Relaxed. By the second bridge I stop to watch two magnet fishermen throwing their lines into the waters, and pulling out bits of pipe, a length of chain and an old bucket. At the next bridge a bicycle fished from the canal is leant up against the brickwork. It’s a kind of hunter-gathering, I think.

I have two borrowed dogs today. They take me for a walk. I stop when they stop. They’re experiencing the towpath through their noses. Five minutes at one patch of grass, sniffing and snuffling. A few minutes around a stand of dock leaves. A quick inhalation passing a bridge corner. My sense of smell is poor but even I can smell the exhaust and diesel whiff of a passing boat, and the warm muddy water churned up at its stern.

Sticking my nose into a climbing rose someone has planted against the wall, I realise that there’s also the odour of sun heated brick. Beyond the third bridge where the towpath is unpaved the dogs lose themselves in an olfactory wonderland, nosing into grass and weeds. They walk on and I follow, but then they turn back to the same patch for some unfinished smell-reading. There’s a rustle and a darting shape and I see a wren mousing through the brambles. And notice that I can smell the leafmould that’s been scuffed up. The dogs are teaching me how to use my nose.

There’s the blackbird fluting away on the same hawthorn tree as I’ve seen it do every evening. I run my eye along the boats and canoes along the far bank – I feel satisfaction that they’re all in place.

I don’t feel like walking the same stretch of canal again. Time is short today and I have writing and deadlines and research to do. The idea of trudging along the same length of towpath that I’ve done four times before seems pointless. I remind myself that pointlessness is the point of doing this. That not having time to do something good, is exactly when you most need, to make time to do that thing.

I decide to run the towpath instead of walking. That gets me out of the house. I jog and sprint the first mile but then something happens This stretch of canal is familiar to me now, and it deserves my attention. I slow to a walk. Then stop. There’s the blackbird fluting away on the same hawthorn tree as I’ve seen it do every evening. I run my eye along the boats and canoes along the far bank –  I feel satisfaction that they’re all in place. I notice that a stand of flag irises by the towpath have opened into full blazing yellow flowers since yesterday. I stand for a long time looking at them. I’ve reset myself to strolling and stopping mode again. I must look like the laziest runner ever.

Something has happened in the past days of walking. Walking in this evening’s soft light instead of my individual senses jostling for attention and each pushing the others aside as they normally do, they all seem to combine into one level of awareness. They’re complimenting and reinforcing each other. So I feel the rough pebbles and soft dust under my feet even as I pluck a piece of grass and chew on its sweet bitter stalk, whilst smelling the silage-scent of its juices.

More flags have flowered. From far away they look like one child’s painting yellow. Up close, looked at for five minutes the yellows of the scrunched petals separate out. Gold, sulphur, ochre, butter. The brilliance of a high-viz vest where the evening sun reflects off a petal. The ochre-brown of the shadows within each flower’s folds. These few miles are the same miles I’ve walked every day for the past week but they have become richer, deeper. They have become known to me. 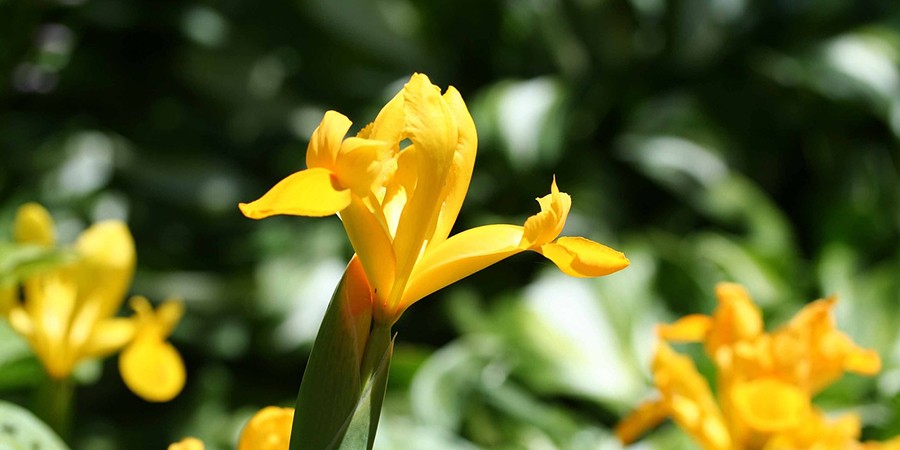 Today I am thinking about walking as I walk. Because walking and noticing together is what we as humans are designed to do it seems, and they’re deeply satisfying. But, more, perhaps walking and using all our senses in the natural world can reset the anxious brain turnings we all fall prey to when dealing with the artificial and inhuman pressures of modern existence.

All our senses – well, mine anyway - struggle to make sense of speeding traffic, and anonymous crowds, and dislocated relationships, and deadlines and paperwork and future gloom and past regrets. As animals we haven’t evolved to the point, yet, where our subconscious and our senses find those ‘normal’ things in anyway normal. Despite all the chairs and cars and escalators cluttering up the modern world we’re still a walking species and our senses are still much more at home being walked around so they can smell plants and see birds and feel sun and rain.

In the past the boat people, horse walkers, lengthsmen, and inspectors of the working canals would have walked and noticed naturally. In our times, in a week on the Oxford Canal, I’ve seen how many people still do the same. The commuters further to take the tranquil towpath way between work and home. The dogs and people exercising each other. The ponderers and strollers. Hikers and marchers. The chatting groups and couples. All of us taking our senses for a walk.

Buy his book, ‘Water Ways: A thousand miles along Britain’s canals’ (Profile Books) it's out now.

Jasper has written a number of blogs for us, check them out here