Litter is a modern problem

Litter, when one thinks about it, is pretty interesting stuff. We all know what it looks like when it's on the ground or in the water but how did it get there? I don't mean just who threw it down or dropped it, but what was it before it was litter?

Packaging, usually, or something designed to be disposable. They're both pretty modern ideas, and a sign of a mostly wealthy, rich-in-things society. I mean, the luxury of buying water or any drink in a bottle you can throw away after use, rather than having a gourd or leather bottle that Medieval folk had to carry around and refill, because they were far too valuable to just chuck on the ground after they'd been drunk dry.

The sheer privilege of having a paper tissue that one can blow one's nose on and then get rid of rather than having to stick it back into a pocket like an old-fangled cotton hanky. What about a sandwich in its own little sandwich-shaped plastic case to keep it from getting squashed, that's used once and then binned? Oh, what times we live in. Yes, indeed what times we live in, because it all seems to have gone mad. There's litter, packaging and disposable stuff everywhere.

Even a single discarded coffee cup or crumpled crisp packet jars against the greenery and purity of the plants and waters that form the network's nature corridors.

The canals are not the most littered places by a long way, but discarded rubbish on towpaths or in the water seems far more of an eyesore than on roadside verges, or even on city streets. Perhaps it's because even a single discarded coffee cup or crumpled crisp packet jars against the greenery and purity of the plants and waters that form the network's nature corridors. Perhaps, too, it's because we move slowly on the waterways, and so have more time to look around.

Still it does make one wonder what someone thinks when they decide, consciously or unconsciously, that having carried a full (and so heavy and awkward) disposable cup of coffee to some canal side bench that it's ok to just put the empty cup on the ground and walk away rather than carry the lighter, less-awkward unwanted bit to a rubbish bin.

You see, I don't think that many people are willful litterers. It takes a rare anti-sociability to actually throw something on the ground knowing that it has really messed the place up for other people and take pleasure in that knowledge.

Rather, I think that a modern world of disposable packaging and plastics has moved faster than our human minds have. In our brains we're mostly back in a simpler times when we had rubbish but no litter. Neolithic man made very sure to shuck his thousands of oysters in particular midden piles because the shells were definitely 'rubbish', one of those things one didn't want too close to the homestead stinking everything up. Pretty much everything else was just organic stuff that disappeared when dropped.

Millennia later most things one didn't want were still organic - in the Dark Ages you could throw a chicken bone on the ground after you'd gnawed it clean and be pretty sure that some dog would pick it up and finish it off. 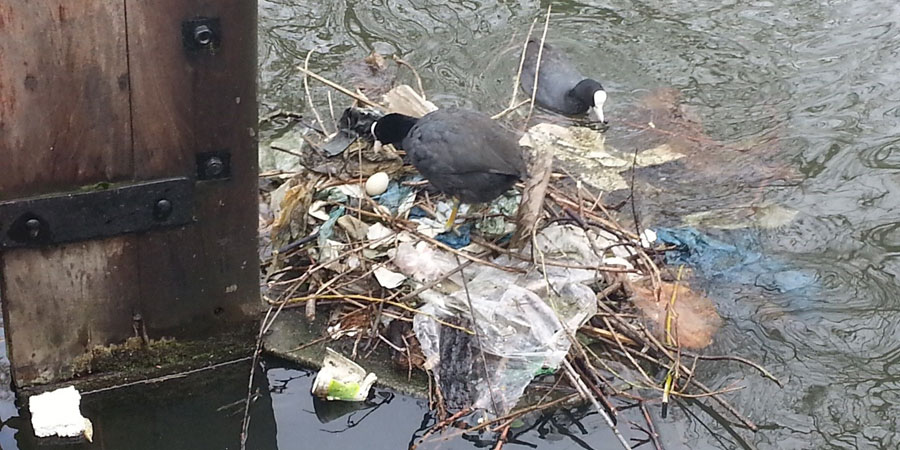 On the canals and much closer to our own time, working boaters through the 19th century and well into the 20th would have had few things to throw away, and what they did hadn't changed much from centuries before. Boaters might have thrown an apple core into the hedge as they passed but rather than this being littering there was a fair chance that the seeds would germinate and a tree grow. I've found sweet, rather than crab apples along towpaths beside the Kennet & Avon Canal, the Grand Union Canal and the Shopshire Canal, a legacy from the past. There might have been the odd broken china plate or cup thrown overboard or into the ditch but bottles and cans were useful and could be recycled and repurposed rather than thrown away.

But modern problems produce modern solutions, and minor but inspiring heroics. More and more people, especially along the waterways are doing something rather wonderful, they're picking up other people's litter. Volunteer parties transform whole lengths of canal in a day of picking up rubbish with tongs, rakes and gloved hands.

I've met many individuals who clean 'their' stretch of waterway, filling bin-liners, also plastic I know, but we live in complicated times, with anything rubbishy, except those dog sacks tied to branches which they leave for the elves.

Others vow to pick up six or ten or twenty pieces of litter every day. That's the kind of litter picker I've become. A small bag in my pocket and I pluck up ten pieces a day, whether I'm out walking, running, cycling or kayaking.

It doesn't sound much, and really it's not that much, certainly not in terms of effort required, but it can have a real and positive effect. Pick up rubbish where you walk every day and when there isn't any left there's less chance that anymore will be thrown down on the pristine ground you've created.

There's more to this than just having canals and towpaths looking nice. That would just be aesthetics, but things have got serious now. Very serious. Most waste is plastic. We knew that it took tens or even hundreds of years to break down, but now science has shown that the breaking down process produces micro-plastics that not only ultimately wash down into the seas and oceans but in some way not yet explained have also made their way into seemingly every body of water on the planet from Antarctic to mountain lakes via tropical rainforests, wildernesses and very likely our own bodies.

The consequences of microscopic plankton, at the bottom of the food chain, feeding in and very possibly on, a soup of far smaller plastic particles, before being carried up that food chain to finally be ingested by the largest whales, and humans is unknown. But I'll bet you a used tissue against a plastic-free dolphin it's not good.

The canals as a network of water roads running through every kind of landscape and cityscape and alongside roads pick up more than their fair share of plastic, often in the form of disposable drinks bottles. Kayaking across England on the Leeds & Liverpool Canal I was astounded to find some stretches with hundreds of soft-drink bottles collected in small areas, like plastic Sargasso Seas.

Shocked by this I went out with Lizzie Carr who, after paddle boarding the length of England on waterways and, like me, seeing the horrifying amounts of plastic that have ended up in the canals, started Plastic Patrol. With the support of the Canal & River Trust, paddle boards and canoes are provided for volunteers, who can turn up and go out on a different stretch of canal each weekend during the warmer months and pick plastic. 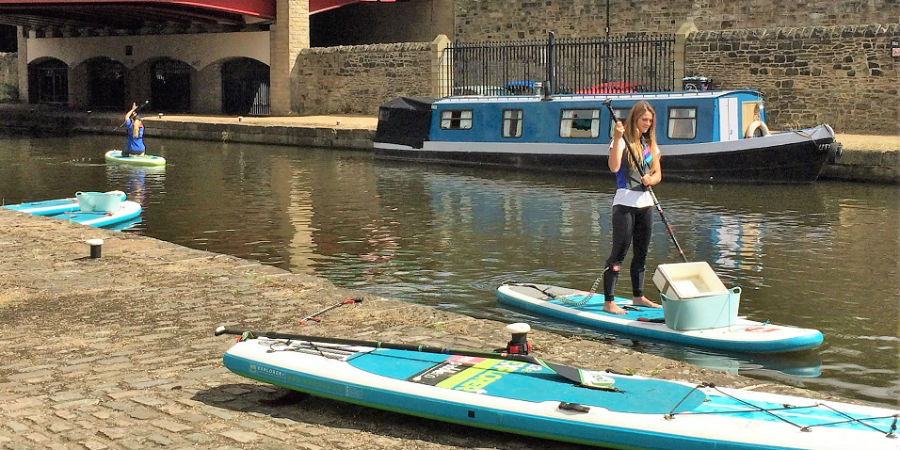 I joined Plastic Patrol on the Walsall Canal. Most of the volunteers were trying paddleboarding for the first time. Some though had been travelling each weekend to join in wherever the next floating litter pick was. The reason the regular paddle de-litterers gave? It was fun. And it was. There was an unexpected satisfaction in loading our boards with rubbish. Even a perverse pleasure in fishing out some of the grosser, smellier plastic bags. By the end of the day we'd filled sixty gardening-sized waste bags with rubbish. A stretch of urban canal that had been polluted with plastic bottles and other waste now looked fresh and clean. It would have taken a really curmudgeonly type to be the first person to throw something back into the almost pristine waters.

The paddle pickers had fun. We'd made new friends, and got to try paddleboarding. Above all we had made a small but important difference.

Find out more about Lizzie Carr and her plastic patrol

Buy his book, ‘Water Ways: A thousand miles along Britain’s canals’ (Profile Books) it's out now.

Jasper has written a number of blogs for us, read more here