I'm standing at the back of a marquee theatre in the gardens of the Folly Inn, at the bottom of Napton Flight on the Oxford Canal. Bright coloured tables and chairs.

A dark curtain backdrop. And above the low stage a proscenium arch of lights that I'd created a few hours earlier from a string of bulbs and sheets of silver foil. Some sixty people - boaters, villagers, live-aboards - in the audience, drinks to hand. I've got a pint of Shag Weaver, myself, as recommended by Mark, the landlord.

On stage there's a tea-chest decorated in canal boat colours. Kate Saffin, one half of the waterways-based Alarum Theatre Company, comes on stage from the wings, (well, actually from the lawn that's lit by the last colours of an Indian summer's dusk), delves into the chest, pulls out an ancient blue woollen jumper, a windlass and a tattered notebook journal. Within minutes she's taken us 75 years back in time to World War II and into the lives of the women who signed up as trainees on the 'idle' canal boats that needed crews to keep them moving and transporting essential supplies.

Through diary excerpts, mime, humour and props pulled from the chest we follow Isobel, the character Kate has brought to life, as she joins this hard but exciting new world, learns from the more experienced boat women and even more from the working boat families, and finally graduates to taking her own pair of engined boat and butty with other new recruit 'Idle Women' up and down the Grand Union and Oxford canals.

Like the better known landgirls the trainees find an exciting freedom in starting a new life. But on the waterways it's a tough life, too, with a lot to learn. Isobel laments the difficulty of steering a straight course, the more so because even the young children of the boat families can manage far better than her. Locks are difficult and complicated. 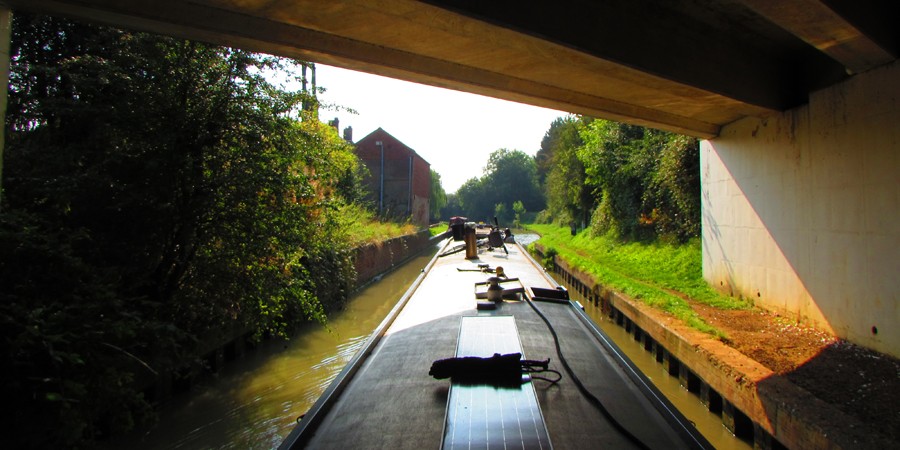 The cramped living quarters and basic provisions and the weather and harsh physicality defeat some of Isobel's fellow crew who leave. She stays on. She's thrilled to wear trousers, earn acceptance from the professional boat families, smoke, stand up to her patronising fiance and discover that she can do 'men's work' and rather well, too.

Back in 2016 there's an intermission. Trips to the bar. And then the stage is taken by the other half of Alarum, poet, actor and musician Heather Wastie for more time-travel. In period costume, accordion to hand she recites and sings her way through a wider history of the 'Idle Women.'

To some in the marquee the history of the Inland Waterways' trainees was already known, though perhaps not in the detail of Kate and Heather's intimate first-hand dramatisations. Still, there had been knowing nods at references to particular stretches of canal, to particular tight bends, awkward bridges, difficult tunnels or to long flights of locks, and to Napton itself. For others in the audience it was a new insight into a specific period in the canal's social history, and the way the waterways changed lives. And still change lives.

For me Isobel's experiences as a raw recruit had an exciting if uncomfortable familiarity. Only the day before the show I had joined Kate for three days of boating. From the moment I loaded my folding bike onto the roof of Morning Mist just outside Rugby, my instruction had begun, as if I too was a trainee tasked with absorbing the huge amount of boating and canal lore that has been worked out and passed down through the generations.

My days became a kaleidoscope of impressions. Tick over and neutral. Mooring with loops. Centre ropes. Ducks and moorhens and kingfishers. Coffee mugs and bacon sandwiches on the roof next to a 15 year old Nicholson's guide with information on good moorings, bus routes and short cut paths to shops pencilled in the margins. 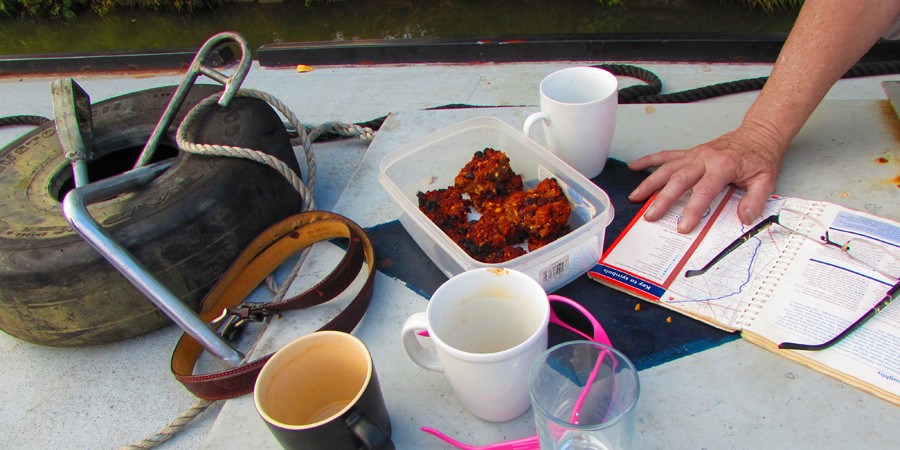 "You take the tiller," Kate told me, far too soon i thought, "stand in front of it, in the hatch....that's where you steer from." Now i had to consider wash, and moored boats, and steering around the boat's centre point. A burst of reverse to clear the prop after going through weed. Pushing the tiller over in anticipation of the surprisingly strong 'suck' from passing boats.

Whilst Kate told me the stories she'd learnt from the last of the boating families, pointed out distant churches, (boating families always sing 'The Old Rugged Cross' at funerals), talked about the Idle Women, produced tea and bread pudding. And far too often had to break her conversation to tell me to do something obvious to old hands but baffling to a trainee 'Idle Man.'

Apprehension. Concentration. Frustration. Tranquility. Exhilaration. Working the tiller, chugging through the Warwickshire countryside on the misty waters I'm feeling exactly what Isobel had felt nearly three quarters of a century before.