One of the biggest surprises when I began travelling the canal system was discovering just how many miles – yes, miles – of the waterways are underground.

The eight longest tunnels still in use on the network add up to nearly 14 miles of dark, narrow, dank subterranean corridors of water, whilst tens of shorter tunnels add even more miles to the total.

Boaters, of course, will already know how many of their cruising waters disappear into the darkness at some point along their length, and many of those boaters actually enjoy the adventure of gliding into a black ‘cave,’ scarcely wider than their craft. They relish the excitement of the darkness closing in on them and the Indiana Jones feel of following their front light’s beam as it picks out the arch of bricks or rough rock - as well as stalactites and spiders' webs. They like the sound of their engine booming and reverberating, and the smell of its exhaust thickening the air. Other boaters, though, hate the dankness and the claustrophobia, and merely endure the experience and enter tunnels with a faint feeling of dread and exit with relief.

Read our guide to canoeing safety

Unpowered craft are not permitted through some tunnels. Find out more, plus other tips on keeping yourself safe in a canoe or kayak

Canal tunnels were designed with efficiency in mind

When the canals were a water machine for moving cargo as rapidly and cheaply as possible, the feelings and comfort of the boat crews were of little importance. Negotiating tunnels was part of their job.

Efficiency? Cost? A well placed tunnel could save the expense and difficulties of building the numerous locks needed to raise a canal up over high ground and, crucially, could keep a summit pound below the height of whatever water was available. Locks used precious water every time they were opened, whilst tunnels didn’t.

Historically, Standedge Tunnel on the Huddersfield Narrow Canal provides a good illustration of the pros and cons of tunnelling practicalities and economics. At just over three miles in length it’s always been the longest on the system.

The highest and the deepest, The Pennines rise a further 636 feet above Standedge which is already 643 feet above sea level. Tunnels, though, were expensive to build. And Standedge particularly so. It was engineered by the optimistic Benjamin Outram, who soon found that geology and geography conspired to make blasting, digging and removing the waste far more time-consuming, expensive and dangerous than he’d allowed for.

Floodings, collapses, deaths and errors slowed the tunnels construction and at one point brought it to a halt altogether. He resigned from the job when, with the rest of the Huddersfield Narrow canal finished, the tunnel was still barely started and it fell to Thomas Telford, the master engineer, to take over the project and drive it forward to completion in 1811.

Up until the Standedge Tunnel’s opening, cargoes carried on the Huddersfield Narrow had to be transshipped from tunnel end to tunnel end over the moors using strings of pack ponies. Even after the opening of the tunnel the horses used to pull the boats still had to be walked over the top whilst the craft themselves were ‘legged’ through–  pairs of men lying on their backs, legs out either side, ‘walking’ their way along the tunnel walls to push their boat on through the dark.

More about tunnels and a video explaining 'legging' in more detail

It wasn’t just Standedge. Very few canal tunnels had towpaths and legging was the the main way of getting a horse-boat through a tunnel (though some had hand chains along their walls, whilst occasionally boaters punted themselves along with a pointed pole against the canal bottom or the brick roof, a practise outlawed because of the damage it did to the infrastructure).

Legging may have been hard work but things actually got worse with the introduction of engined boats at the end of the 19th century. The build up of exhaust emissions from numerous boats in a constricted space made even short distances travelled underground unpleasant, whilst the atmosphere in the longer tunnels was positively dangerous for health, leaving crews coughing, choking or even unconscious from the fumes.

In modern times ensuring that the longest tunnels retain fresh air has meant restrictions placed on boaters. Passage through Standedge is limited to eighteen boats a week, nine in either direction, on a mere three days each week leaving the other days for the tunnels air to refresh itself. Boats passing through the one and three quarter miles of the Dudley Number 1 tunnel, the second longest still in use, are pulled by an electric tug, though those crews with the necessary stamina and masochism can opt to leg their craft the whole distance.

My first plunge into the world of underground canals came when kayaking canals and navigations across England from coast to coast. On a wet October day I paddled into the Gannow Tunnel that, going west to east, carries the Leeds & Liverpool Canal into Burnley. It was an exhilarating experience, if one defines ‘exhilaration’ as part excitement, part curiosity and part deep unease.

Within feet the darkness engulfed the kayak. The splashes from my paddles echoed creepily down the cavern-like channel. My head torch showed black waters rippling along the tunnel walls. The circle of light at the other end seemed small and very distant – indeed, it was almost half a mile away. Common-sense and experience told me I wouldn’t capsize, but my imagination played with what it would be like if I did. I concentrated on the upside, it might have been pouring rain outside, but in the tunnel I had a roof over my head.

Even a cow, I mused, had shown more swagger in tackling the Foulridge than me.

The next tunnel as I paddled east towards Leeds was the ominously named Foulridge, running under the Pennines and nearly a mile long. It was another cold, drizzly late-October afternoon. I knew that paddling through the tunnel in a small craft, particularly solo, was officially frowned upon, and it was getting close to dark. Approaching the tunnel mouth I took the easy way out. Offered a lift on a passing boat I accepted gratefully, and with my folding-inflatable kayak up on deck, I chugged into the darkness with Bill and Maria, a mug of tea in my hand.

Still, as a trans-England kayaker it felt like a bit of a cheat to have avoided paddling through. Even a cow, I mused, had shown more swagger in tackling the Foulridge than me. In 1912 ‘Buttercup’ fell into the canal just where we had entered the Foulridge and swam through its full length to the eastern end. She was revived and rewarded for her feat with a shot of rum.

Buttercup’s valour, compared to my laziness and timidity, rather weighed on my mind. So I was enthusiastic when a year later the Foulridge Tunnel was officially opened to kayakers and canoeists as part of the Desmond Family Canoe Trail and I got a call from Nancy Campbell, the Canal & River Trust’s canal laureate. She was kayaking the length of the Leeds & Liverpool, writing poetry as she went. Did I want to come up and kayak with her for a day? And did I want to come for the Foulridge Tunnel stretch? Well, yes, I rather did.

Believing in light at the end of the tunnel 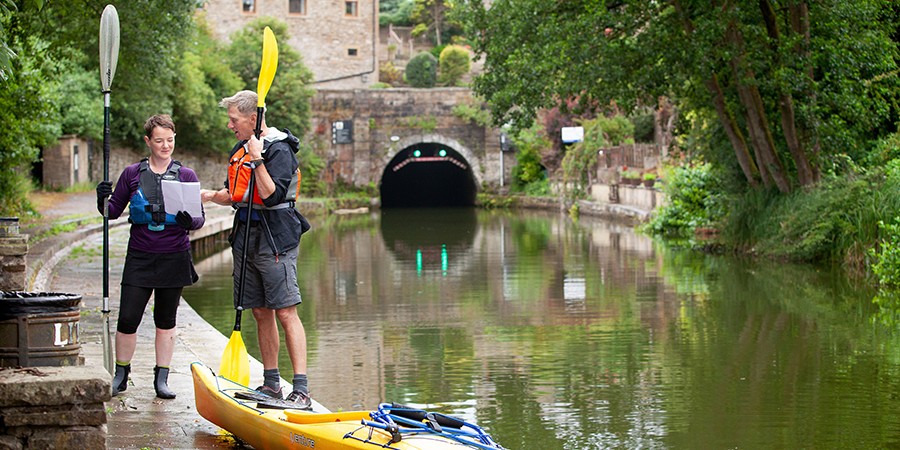 I arrived early in the morning on another drizzly day and met Nancy at the western entrance to the tunnel. Danny Matley, the Canoe Trail programme manager had organised a kayak for me and we were being joined by Canoe Trail project leader, Greg Brookes, for the day’s paddle. We donned head torches, got into our kayaks and as the ‘traffic lights’ changed to green giving right of way for boats heading one way for half an hour, we headed into the circle of darkness boring through the hillside ahead.

A kayak goes roughly at walking pace, and at that speed a mile of dark seemed a long way (though it would take less than quarter of an hour of paddling). Believing in light at the end of the tunnel seemed more act of faith than an act of vision, and the pools of light that fell from the shafts rising to the surface (used initially to haul up the spoil as the tunnel was built and then providing ventilation) provided spooky glows rather than illumination.

As we paddled deeper into the hillside the human history of the tunnel eclipsed my feeling of unease. Men had laboured here, boring and blasting through the rock, barrowing and winching out spoil, laying bricks and puddling clay. Then for nearly 200 years boat crews had legged and chugged (and coughed and wheezed) their way from one end to the other.

Buy his book, ‘Water Ways: A thousand miles along Britain’s canals’ (Profile Books) it's out now