The first aqueduct built here to carry the canal over Yorkshire Street was finished in 1797 and was known as the ‘culvert’.

When it was completed it opened up the next section of the canal. Look carefully at this early image of the culvert from Yorkshire Street. You can see a tollgate in the foreground. As people passed through the tollgates they had to pay a toll to use the road before they could continue their journey.

Times are a changing 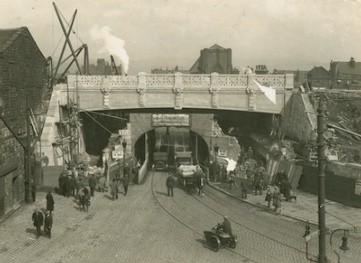 time could not meet the growing demands of road transport underneath. In the 1890’s subways were constructed for pedestrians in the sides of the bridge to ease the strain, but by the 1920’s it wasn’t enough. With the tramway system and the ever-popular double decker buses a change was needed. A very different aqueduct was constructed and remains to this day.

Jim describes how the aqueduct was maintained

Throughout the 18th and 19th centuries industrialists raced to build mills along large stretches of the canal in Burnley. All along the canal you may spot evidence of what took place here, including the crane here on the aqueduct. This crane was installed to lift heavy ‘stop planks’ into place. The stop planks would slot into gaps in the towpath and stop flood water should the embankment breach.

While exploring the canal you may, if you are very lucky, catch sight of the striking cobalt and russet kingfisher. Their numbers are growing along the canal in Burnley, which is a sign of the improving health of the water here.