Building the tunnel was difficult and took five years to complete. Workers began at either end and worked towards the middle using similar excavation techniques to the Romans.

This major feat of canal building highlights the skill and precision of the engineers, navvies, miners and stonemasons involved. Burnley became a major centre for engineering.

The tunnel was constructed without a towpath so boaters would lie on their backs and walk along the ceiling or wall of the tunnel to propel the boat along. All 511m of it! Exhausting! ‘Boat Horse Lane’ was built to connect the two ends of the tunnel. As the boats navigated the tunnel, the horses were walked over the top, along the lane and back onto the towpath. 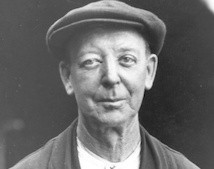 through the tunnel. He was ‘Gannow Tugmaster’ for 40 years and towed thousands of boats through the tunnel during this time. Working on the canal also meant he was well placed for several daring rescues. On one occasion Draper leapt into the water from the bow of his tug to save a child who had fallen in the canal.

Tunnels like this are a haven for bats. They roost in the dark, damp conditions and feast on the insect rich water. This makes Gannow Tunnel an ideal place for them to live and breed. If you walk along the towpath at dusk you may be lucky enough to spot the tiny Pipistrelle bats whiz past.