A cotton mill was build here around 1840 by George Slater, a leading industrialist. It was six storey’s high in places, with several chimneys and a weaving shed.

Following a fire in 1863 a clock tower was added, the town's first public clock and it soon dominated the skyline. Clock Tower Mill quickly became a unique and notable landmark. But why did George Slater add a clock to his mill?

Lancashire fire fighters were called to Clock Tower Mill one night as a fire ripped through the building causing extensive damage. Twenty fire 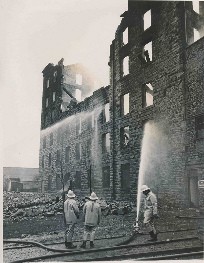 engines tackled the blaze with one witness describing the scene as ‘devastating’. A spokesman said the fire had been bought under control but catastrophic damage had been done. The towpath remained closed.

Steve Chappels explain why many of Burnley’s mills kept firefighters so busy.

Following the fire on 7 April 1987 the clock tower became too unstable and was demolished. The skeletal remains of the once thriving mill served as a stark reminder of Burnley’s industrial decay. The rest of the mill was finally demolished in 2004. With the loss of such an iconic building and a window into Burnley’s industrial past, restoration and regeneration seem more vital than ever before.

Swans nest along the banks of the canal in spring, where the male swan can often be seen patrolling the area as the female swan nurtures the egg. Look out for a pair of mute swans who have made this area of the canal their home.

Find out more about swans