Known as the straight mile, although it is just short of a mile, the Burnley Embankment or Burnley ‘Val’ is a stark contrast to the winding natural contours of the rest of the canal.

The embankment was costly and difficult to build, so why did they? It was built across the Calder Valley to avoid the need for a series of locks, which would only slow boats down and thus industrial production. This innovative embankment above the rooftops was constructed as a result.

Why a Wonder of the Waterways?

To the untrained eye the Burnley Embankment appears at first glance to be very unremarkable. Despite this it is one of the seven wonders of the waterways. Why?

Listen to Jim and Alan explain

As you look across Burnley from the embankment you can see the neat and narrow rows of through terraced houses. Built in the second half of the nineteenth century, the dingy and narrow houses were often damp 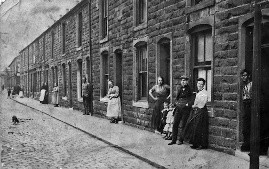 with no sanitation or access to clean water. Despite this, they marked a more organised approach to house building in Burnley.

Before then, many families crammed into squalid back-to-back houses and cellars, haphazardly constructed to meet the demands of a population explosion. Workers lived in unbearable, insanitary conditions facing extreme poverty and disease.

The canal is teeming with fish including bream, pike, eel, perch and roach. Roach is the most abundant and if you look carefully you may see a flash of silver in the water as one swims past. Roach feeds on insects, insect larvae, snails and soft weed.