Reports on angling matches from the week ending 9 July 2016.

Terry Nutt commented, “My thanks to all my fellow organisers and helpers on the day also John Ellis National Fisheries manager for his presence on the day. I must stress that you do not have to be a member of the Angling Trust to fish the qualifiers but you do to fish the Final.”

Hodnet AC have been entrusted with the Welsh Qualifier on the Llangollen Canal in Whixall, Whitchurch, Shropshire on Saturday 8th October 2016 and tickets are still available through the Angling Trust website. 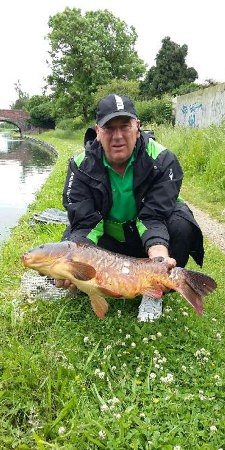 Broome sweeps the others aside on the Brum Faz

Dudley-based car mechanic Steve Broome, guesting for Sensas Dams & Lock Blue in the 84-entry Dams & Lock Teams of Four Summer League continued his run of good form by landing Sunday’s round two which was staged on the Birmingham & Fazeley Canal in Erdington, Birmingham. Maver Midlands-backed canal specialist Steve drew peg 104, in the middle of the Cincinatti length, where he poled worm to net eight bream to 2lb for a 16-0-0 top weight. Runner-up Ian Sharratt (Long Eaton Fed.) also pole-fished worm off peg 182, the end peg on the brambles, to tip 13-5-0 of skimmers onto the scales, ahead of Ian Jones (Browning Central C) who returned 11-1-0 of caster-caught skimmers at peg 117, on the reed bed in the Tyburn stretch. Steve’s win aided Sensas Dams & Lock Blue to the team spoils on the day with 12 points to take over the league lead on 36 points. Shakespeare Superteam/Bait-Tech) are currently in league second with 49 points. The photo shows Steve Broome with a 14lb 14oz mirror carp which he caught in round one.

The irrepressible Bert eases to victory on the Staffs & Worcs

The eighteen intrepid anglers at Wednesday’s Over 60’s Club Open on the Staffs & Worcs Canal in Slade Heath, Coven, Stafffordshire endured torrential rain throughout, nevertheless Wednesfield-based octogenarian Bert Simmill (Bilston Angling Centre) eased to victory on peg 6, just past the cables, with 6-3-8. It is a shallow swim but Bert managed to bank a 2lb chub bolstered by chublets all to poled caster. Johnny Benness (Goodyear AC) followed on peg 5, at the other side of the cables, where he had a 1lb roach straight away and he winkled away for small fish to scale 3-10-2, all gathered on pole-fished caster and pinkie. Stafford legend Tony Keeling (Team Eclipse) secured third on peg 13, where he started on bread to catch a 2oz skimmer and several others, then switched to pinkie and had four more skimmers to 4oz, with a couple of dumpy roach, before finishing on squatt for a few more skimmers and roach to return 3-5-10. 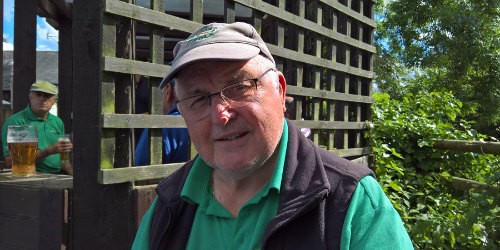 Maestro Joe bags up on the Shroppy

Wolverhampton-based angling maestro, Joe Brennan (Four Ashes AC) topped Sunday’s Wolverhampton AA Open on the Port Lane Section of the Shropshire Union Canal in Brewood, Staffordshire by a healthy margin with a level 11-0-0 net of maggot-tempted chub and bream from end peg 1, next to Hyde Mill Lane Bridge. Fordhouses rod and Joe’s teammate, Dave Richards came second on peg 12 with 8-7-0 of caster-caught chub to 2lb, leaving Eric Gardner (Team Eclipse) in third when he recorded 5-7-0 of roach and perch which fell to pole-fished caster and maggot at peg 7. The photo shows Joe Brennan after the match.

Madeley made it to the top on the Erewash

The stretch of the Erewash Canal below Dockholme Lock in Derbyshire displayed improving form during Saturday’s round four of the Long Eaton Federation Summer League. Bream, tench, roach and perch were caught and only one angler weighed in less than 2lb. Worm and caster baits proved productive for winner Pete Madeley (Derby) and he caught three bream, a tench plus perch and roach, the best redfin being 1lb 6oz, for a 10-9-0 clear victory. Alistair Chisholm (Shakespeare Superteam/Bait-Tech) was runner-up with 6-1-0, consisting of two late caster-enticed bream, to add to a couple of pounds of small roach and perch, ahead of Steve Posiak (Long Eaton Fed.) who completed the frame with 5-13-0, made up of a tench, a bream and several perch. Will Sully (Long Eaton Fed.) is currently atop the league on 9 points and Derby’s Pete Madeley is now occupying league second on 13, from Dave Fowler (Matlock AC) who has amassed 14 points thus far. 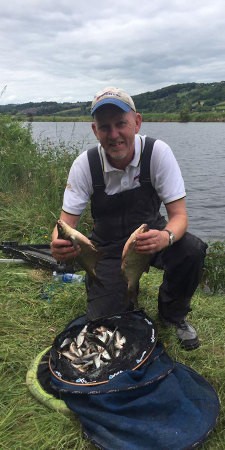 On Sunday, Lurgan Coarse Angling Club hosted their inaugural Float Only Cup on the Newry Canal in Newry, Northern Ireland. Sport proved to be hard-going with most fish being caught on the long pole with odd fish to slider tactics. Winner Phil Walton banked 140 roach and skimmers, mainly on pinkie and maggot over groundbait with a few on the slider, to raise the trophy with 4K 800g. The next two in the frame opted for the same bait strategy, catching chiefly roach and skimmers with the odd hybrid, primarily on the pole and Johnny McKinley secured second with 3K 580g, pipping Johnny Keith into third on 3K 540g. The photo shows Phil Walton with his winning catch.

John dodges the snags at Castlecroft

Due to the recent dredging along the Castlecroft match length of the Staffs & Worcs Canal in Wolverhampton, West Midlands, Sunday’s Halesowen RBL match didn’t fish as well as expected. However, match organiser John Billingham managed to find a trio of chub to 3lb plus a few perch to poled worm and caster for an 11-10-0 top catch, at peg 17, although he lost another three chub in a new snag which has developed since the dredging. Sean Waite’s second placed 7-9-0 consisted of chub, perch and skimmers, attracted on poled worm and caster, fished against the boat off peg 15, leaving Paul Skidmore in third on peg 18 where he opted for the same strategy to bring 6-5-0 of perch and skimmers to the scales. 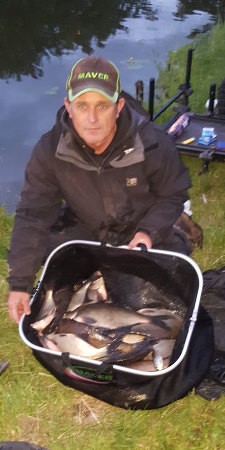 New match record for Dazzling Daz on the Lancaster Canal

Unseasonably cool and very blustery conditions greeted a field of 19 for the 7th match in the Ted Carter Lancaster Canal Tuesday Evening Series held at Dimples Lane, Garstang, Lancashire. The pegs were all laid out towards the Garstang side of the bridge and included was the section that had thrown up a big 30lb weight the previous time the match had been held here. Whilst this was potentially a favoured area the signs had been that the next section, through the bridge, was coming back to the form of previous years and so it proved …and how!

For the third week running Daz Shaw (Maver NW) was top of the pile this time with a tremendous weight of 38-2-0 of bream and skimmers. Daz was third peg through the Garstang Road Bridge, and kept the fish coming to worm all night. In doing so he eclipsed the previous 3½ hour match record for the Lancaster Canal.

It was close for the next three places and second on the night was local rod, Lee Backshall. Lee who was next peg to the winner, amassed 8-13-0 of skimmers, which would probably have been more had an irreparable break to his pole not forced a switch to tip tactics relatively early on. Third on the night was Steve Wilson (Lancs. MG) who had 8-11-0 of hybrids and included a good bream, from the first peg next to the wide at Dimples Bridge. Bringing up fourth place was John Brogden (Ted Carter Southport) with 8-3-0 of skimmers and hybrids again adjacent to the winner. The photo shows Daz Shaw with his winning net.

Dave steams ahead of the Engine Pool

Clampits AC set up around the Engine Pool at Earlswood Lakes in Solihull, West Midlands for their Sunday encounter where Method feeder tactics proved fruitful for the top three anglers who all scaled mixed catches of carp and bream. Finishing head and shoulders above the rest of his rivals, Dave Richards won with a level 60-0-0 from peg 75. Graham Green and Steve Smith followed with 34-8-0 and 16-12-0 from pegs 79 and 71 respectively.

Clement, sunny and breezy conditions met the 20-strong field at Saturday’s Blackfords Progressive Monthly Open held on a coloured Calf Heath Reservoir in Calf Heath, nr. Gailey in Staffordshire. Hednesford-based Dave Shaw (Ian’s Tackle) made the grade on Point peg 52, where he banked a dozen bream on the Method feeder with various hook baits, over pellet feed for 28-6-0. On neighbouring Point peg 53, Steve Preece (M&S Joinery) used a conventional feeder approach with worm and caster to scale 21-2-0 of skimmers, roach and perch, ahead of Hednesford’s Neville Bailey who deployed the Method feeder with assorted hook baits but mainly corn, to net seven bream for 16-14-0 at peg 78. Blackfords’ own Ian Davies secured fourth with 14-15-0 of bream to 3lb, caught on the waggler and expander pellet from next peg 79.

The Linley Bank stretch of the River Severn in Bridgnorth, Shropshire was slowly dropping from the previous day but was still 2½ft on from a normal summer level and highly coloured with brown sediment so sport proved patchy at Saturday’s 32-entry Nick Gretton Memorial Open. Richard ‘Bucko’ Buxton (Bridgnorth AS) took the honours on peg 52 at the top of the damson trees with five barbel, the largest of which was 5lb, alongside a few roach and some small chub, all captured on the pellet feeder for 24-11-0. Severn veteran Graham Wade (Smethwick) followed with a trio of barbel, all around the 7lb mark, snared on straight legered meat from last week’s winning peg 42, at the bottom of the willows, where he scaled 21-8-0. Chris Hyde (Elmbridge) slotted into third with another three barbel, caught on the pellet feeder for 18-8-0 from peg 34, below the island. Over £100 was raised for the Disable Anglers Charity.

The River Trent at Burton-on-Trent, East Staffordshire was still carrying extra water due to being up and down during the week but fished consistently during Sunday’s 69-peg Drennan Coors Masters 2016 Qualifier which was combined with an Alzheimer’s Charity Match. Winner, Stuart Raynor (Dynamite Matchman Supplies) netted all roach on waggler and maggot tactics for 10-14-0. Pete Hamilton (Mill Tackle) came second with roach and chublets on the stick and waggler to record 9-10-0, nudging Matt Parkin (Kamasan Starlets) into third who poled maggot over groundbait for 9-4-0 of roach, dace and chublets. Booking their place in the Final on 25th September 2016 are Colin Talbot, Stuart Raynor, Stuart Mclellan, Russ Dowding, John Spencer, Nigel Bull and Matt Parkin. So far £345 has been raised for the Alzheimer’s Charity and all of the proceeds from the raffle will be added to the final total.

Late Severn barbel boost Andy to the top at Winnall

Some good barbel caught late on at the top of the stretch ensured a clear win for Andy Price (Mark’s Tackle) at the Wednesday evening Kidderminster & District AA Open on the River Severn at Winnall, nr. Bewdley in Worcestershire. Drawn on peg 4, Andy bagged a brace of quality barbel for 17-5-0. Jim Rivers (Turbertini Ludlow) netted one pellet-tempted barbel plus roach for second with 9-12-0 from peg 2, ahead of Redditch rod Paul Newall’s 8-7-0 of feeder-caught skimmers, roach and small chub at peg 20.

The Severn was 1.2 metres up and coloured during Saturday’s Kidderminster & District AA Open at Bewdley, Worcestershire, however Steve Rowen (KDAA) managed to latch into two barbel, using the pellet feeder for 12-6-0 from peg 66. Gary Farmer (Tipton MG) legered worm off peg 58, to slide 11-14-0 of chub, eels, perch and one barbel into his keepnet, edging Andy Price (Mark’s Tackle) into third on this occasion with two barbel plus roach, taken on the pellet feeder for 11-11-0 at peg 94.