Reports on angling matches from the week ending 8 October 2016.

Fourth in round one, Wolverhampton’s Richard Guest (Maver Midlands/Wolves) upped his game to land Sunday’s 60-peg round two of the Izaak Walton (Stafford AA)/Browning Lifestyle Teams of Six Winter League held on a gin clear and cold Shropshire Union Canal in Pendeford, Staffordshire. After relentless rainfall the previous day, sport proved difficult in some areas but drawn on ‘fancied’ peg F6 in the bays, Richard found half a dozen bream to 3lb, for an unassailable 16-12-14, tempted on pole-fished caster and red maggot. Shakespeare Superteam/Bait-Tech’s Jason Cunningham followed on peg A9 where he bagged one 4lb chub on poled caster, a 1lb perch caught on worm down the track plus 8lb of mainly squatt-enticed roach for 12-14-0. Penkridge-based Nigel Clayton (Browning Lifestyle Red) had a trio of bream to 4lb on caster and worm, 15 hemp-roach and 21 caster-roach to scale 12-8-0 for third at peg B5. Browning Lifestyle Red topped the team stakes with 19 points, ahead of Shakespeare Superteam/Bait-Tech’s 21. Sensas Black Country were third on 24 points.

The Erewash Valley Teams of Eight Winter League got off to a good start with the first round being staged on the Beeston Canal in Nottinghamshire. Nottingham’s stalwart campaigner, Wayne Swinscoe was a popular winner with a 12-15-0 net of mainly skimmers, attracted on pole-fished bread punch. Wayne was guesting for Team 1779 and was pegged near to Macro Bridge. Pete Allwood (Long Eaton Fed.) came second with 11-6-0 from behind the Boots Factory, which included a good 5lb 11oz bream, the remainder being silvers, all caught on poled squatt and pinkie. James South (Shakespeare Superteam/Bait-Tech) followed on peg 51 with 10-4-0 of chiefly roach, alongside perch, bleak and one skimmer, caught initially on chopped worm and caster, the rest being gathered on maggot over groundbait and pinkie, aiding his squad to the team spoils on the day with 21 points. Dynamite Matchman Supplies were runners-up on 25, ahead of Mill Tackle and 3 Counties who both amassed 29 points apiece.

A succession of moored boats on the Seend Park Section of the Kennet & Avon Canal in Melksham, Wiltshire made pegging the match awkward to say the least for Saturday’s Angling Trust & Canal & River Trust Canal Pairs Championships 2016 Qualifier, resulting in very long walks for the anglers involved. Swindon’s Darren Scott took individual top billing with 13-4-0 of small bream and perch. Cardiff rod Paul Waddington came second with 12-8-0, ahead of Devizes-based Kevin Abigail who returned 11-9-0, ahead of Bromsgrove’s Jason Evans (Browning West Midlands) who weighed in 10-11-0. Jason’s weight along with teammate and partner Mark Roberson’s 6-2-0 saw them take the pairs prize on the day with 34 points but as they have already qualified for the final on the Staffs & Worcs Canal in Penkridge, Staffordshire on Saturday 29th October, runners up, Devizes duo Gary Williams and Paul Passmore have secured their final placing with their 33 point total. The other qualifiers are Paul Waddington and oppo Mark Treasure on 30 points, along with Kevin Abigail and M. Berntsen 29, also James Carty and side-kick Liam Braddell on 27 and finally S. Brooks and D. Mawby with 25 (on weight countback).

Steve leads the way on the Shroppy at Market Drayton

Most of the anglers found it hard graft at Sunday’s Hodnet AC match on the Market Drayton Marina length of the Shropshire Union Canal in Market Drayton, Shropshire after Saturday’s heavy rain and plummeting overnight low temperatures. However some reasonable weights were recorded. Steve Parker led the way with a healthy 15-3-0 net containing some good bream, backed up by mixed silvers from peg 9, opposite the big sycamore tree. Next came Grant Wilde who caught varied silvers steadily throughout on neighbouring peg 10 for 13-3-0. A decent perch of over 2lb caught on bread punch and a bream again over 2lb netted in the last hour plus silvers, propelled Daniel Yale from nowhere into third spot when he weighed in 8-14-0 at peg 8.

The Angling Trust Riverfest Qualifier on the River Trent at Burton

Persistent, heavy rainfall the previous day raised the water level by eight inches on the River Trent in Burton-on-Trent, East Staffordshire for Sunday’s latest 58-entry Angling Trust Riverfest Qualifier 2016 and this hampered sport a little. The place to draw was Sherratts Farm which produced the top three placings. Richie Reynolds (Coors AC) topped the match to book his place in the two day final on the River Wye in Herefordshire on the 19th and 20th November. Drawn on peg 7, Richie fished the pole at 16 metres with groundbait and casters, netting a brace of good bream, bolstered by around 10lb of roach for a resounding triumph with 19-5-0. England manager Mark Downes (Sensas) followed on peg 18, where he balled it on the long pole, fishing maggots over the top at 13 metres for stacks of small roach and 10-12-0. Third place went to Wayne Swinscoe (Drennan/Bait-Tech) who fished the stick float with bronze maggots, three rod lengths out off peg 26, catching mainly dace with the odd roach for 9-1-0. The other qualifiers are Scunthorpe Tackle’s Mark Moutry and Ady Paddock of Chester Tackle Locker.

Sunday’s round one of the Angling Trust Oxford Teams of Eight Winter League saw six teams line the banks of the River Thames at Abingdon and Culham in Oxfordshire. The event took place in bright sunshine on a clear river with hardly any flow however it performed well maintaining the good form it has displayed for most of the season. Ian Higgins (ODAA Drennan) took the individual honours in the top section at Abingdon opposite Wilsham Road with an all skimmer net for a hearty 21-8-0, caught on 13 metres of pole with worm over groundbait. Runner-up Tim Kaye (Isis) drew opposite the rowing club at Abingdon where he had predominantly skimmers for 18-10-0 using the same tactics as Ian and also the groundbait feeder with worm, leaving Carl Eland (Drennan Oxford) in third with 15-1-0 of mainly roach, snared on the pole with caster over groundbait, presented at 13 metres from peg 3 at Swift Ditch. Sensas A4 took the team spoils on the day with 38 points, from Drennan Oxford’s 33. Top Tackle were third on 29 points. 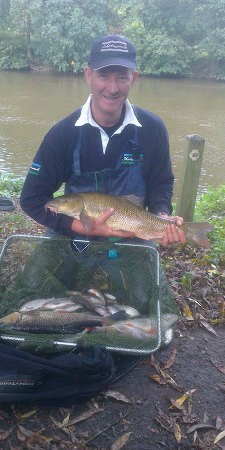 The River Severn in Bewdley, Worcestershire looked in perfect condition for Wednesday’s Kidderminster & District AA Float Only Open. The level was at 0.75 metres and rising slowly with a tinge of colour. The competitors were not disappointed with a brilliant average of 16lb per angler and seven weights of over 15lb being recorded. Lots of good dace and roach were caught and Wolverhampton-based Ian Hingley topped with an impressive 26-3-0 net of all dace, gathered on the whip with maggot at peg GM2. Steve Williams (Shakespeare Superteam/Bait-Tech) followed on peg 86, where he had a mixed bag and one barbel nudging 9lb on the stick float for 20-11-0, edging Dave Hollands (Sensas Portway) into third with 19-1-0 of dace and roach caught on the whip at peg 82.

Matt’s singin’ in the rain on the Severn in Bewdley

Saturday’s Kidderminster & District AA Open on the River Severn in Bewdley, Worcestershire was fished in unrelenting rainfall throughout. The river was at 0.7 metres and carrying some colour. Droitwich rod Matt Hamilton mastered the conditions on peg 58 where he managed four barbel on the pellet feeder for a rewarding 27-8-0 top catch. Dave Foxall (KDAA), fourth in Wednesday’s Float Only Open, raised his game to take second with 14-9-0 or roach and dace on the 5 and 7 metre whips with maggot at peg 71, pipping Nigel Ball (Wednesfield Angling Centre) into third by one ounce, when he returned 14-8-0 of roach and dace, caught on the stick float off peg 50.

Match one of the Shropshire AF Opens on the River Severn in Shrewsbury, Shropshire saw Wolverhampton AA VDE skipper Paul Turner rise to the fore on end peg 60 with an excellent 18-13-0 top catch consisting of six roach to over 1lb, caught on the 6 and 7 metre whips to hand with single maggot over caster and hemp, boosted by lots of 4 to 6oz samples with the odd gudgeon and dace. England International Callum Dicks came second on peg 48, where he fished both the whip, then the pole, both with maggot for 11-7-0 of roach and dace, ahead of Brian Rigby (Shakespeare Superteam/Bait-Tech) who had a 9-3-0 mixed bag of small roach and bleak on the whip at peg 58. England International Cameron Hughes secured fourth with 6-10-8 of roach, dace and bleak at peg 71.

Martyn Yarsley trounced his rivals at Sunday’s Cradley Heath Labour AC bout, fished on the Warks. River Avon in Pershore, Worcestershire. The river fished below par and despite the prior heavy rainfall the day before, it was still very clear. Drawn on peg 3 above the bridge, Martyn fished the whip with maggot and caught 480 bleak for 14-1-0. Runner-up Lawrie Mulheron chose a feeder with caster approach downstream on peg 12 and caught chublets and a welcome 4lb bream for 6-6-0, ahead of Paul Skidmore’s 5-10-0 of dace, roach and small chub captured on float-fished maggot from peg 10. Paul did considerably well considering he had to endure pike problems throughout the match.