Angling reports for week ending 7 May 2016

Reports on angling matches from the week ending 7 May 2016.

A brace of bream for Paul on the Shroppy in Chester 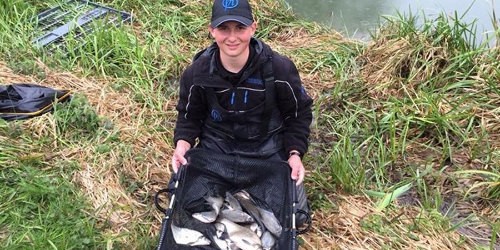 Nick and the Kennet & Avon both hit top form

Thirty seven anglers lined the towpaths of the Upper and Lower Dunmill lengths of the Kennet & Avon Canal in Hungerford, Berkshire for the Hungerford Canal AA Bank Holiday Monday Open where pinkie and maggot proved to be the most effective baits and some hearty weights were returned despite a two hour downpour. Drennan Bordon’s Nick Jones scaled an impressive 30-0-0 top weight of bream to 3lb plus skimmers with the odd roach. All skimmer weights followed with Rod Smith (Turbertini SE) finishing just behind on 26-4-0, ahead of Paul Harrop (Matrix Talisman) who weighed in 17-8-0. Dave Green (Turbertini SE) secured fourth with 13-10-0. The photo shows England Under 18’s International Andrew Cranston (Preston Innovations Thatchers) with his eighth placed 9-9-0 match catch. 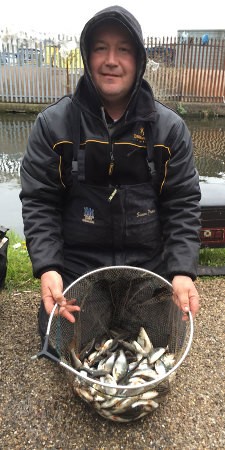 Simon displays his angling prowess on the Grand Union

Eleven squads set up along the Cornerstone Waters of the Grand Union Canal in Small Heath, Birmingham for Sunday’s round three of the Sensas Black Country Teams of Four Spring League. AT & Canal & River Trust Canal Pairs Champ 2014, Simon Preece (Browning Lifestyle) took the individual honours on peg 48. All of the top three chose a squatt and pinkie approach and Crewe-based coach builder Simon had all roach for 13-8-0. Richard Stanton (Sensas Black Country B) did the same for 10-12-0 from neighbouring peg 49, leaving Malc Appleby (Sensas Black Country A) in third with 8-5-12 of roach and gudgeon from peg 1. Digger’s Men took the team spoils on the day with 13 points which takes them to the top of the league with a 56 point total, ahead of Preston Innovations Black Horse who are presently on 66.

Woodside AC’s recently acquired Link Section of the Dudley No.1 Canal in Merry Hill, Dudley, West Midlands was certainly not affected by the previous day’s hail storms at the locality as Sunday’s Woodside AC Open produced some healthy weights. Pedmore-based Pete Hatton (ZLT) commanded the lead on peg 10, where he had 3lb of punch-fish in the first hour on his top kit, then a dozen bream, the largest of which was a 4lb slab, taken on the pole with maggot hook bait over micros and squatt feed alongside mixed small silvers for a cracking 24-12-0.  Drawn on peg 21, Sedgley’s Gary Ward alternated worm, caster and maggot on the hook to net four chub, the largest being around the 3lb mark, together with seven bream to 3lb for second place on 18-8-0, ahead of Alan Homer (ZLT) who had six bream plus a few small skimmers and roach for 13-9-0, snared on poled caster over worm and caster feed at peg 8.

Terry tops on the Staffs & Worcs at Penkridge

There was a hard frost before Wednesday’s 22-peg Wolverhampton Over 60’s Club Open on the Cross Keys Section of the Staffs & Worcs Canal in Penkridge, Staffordshire where Aldridge-based Terry Blyde (Rugeley Miners) pole-fished caster off peg 5, the third peg from the Cross Keys PH in the shallow bay going towards Filance Lock, netting mainly chub plus one perch for a 9-8-10 top net. Seasoned campaigner, octogenarian Wednesfield rod Bert Simmill (Bilston Angling Centre) followed on end peg 1, just past the concrete, with a level 8-0-0, comprising of a brace of perch to 1½lb plus one chub and lots of small roach, gathered mainly on poled pinkie and squatt, nudging Stuart Brailsford (Bridgtown Social AC) into third when he slid 7-8-10 of chiefly caster-enticed chub and roach onto the scales at end peg 22.

Dave wins with Wednesbury redfins on the Walsall Canal

Jonty leads the way on the Shroppy at Little Onn

The erratic weather threw everything it could at the anglers during Saturday’s Browning Lifestyle/Stafford Izaak Walton Open on the Shropshire Union Canal in Little Onn, Church Eaton, Staffordshire. There was a frost first thing then snow, hail and driving rain before the sun eventually emerged late on. Middlewich rod Phil ‘Jonty’ Johnson (Browning Lifestyle/Dave’s of Middlewich) topped on Cables peg 7, with two quality chub to 4lb plus one 1lb stripey to return 9-1-4. Bilston Angling Centre’s Dennis Sumner took second on peg 1 with 7-11-11 of squatt and pinkie-tempted roach and gudgeon, to leave Wednesfield’s Mel Wood (Four Ashes AC) in third when he scaled 6-14-11 of squatt and pinkie-fish at peg 4.

Ray tracks down the Newmillerdam bream

Despite the ongoing wintry and unpredictable weather conditions, the bream at last decided to feed for the Wakefield AC anglers at their sweepstake match at Newmillerdam in West Yorkshire. Ray Reah led the way with a superb 52-15-0 bream haul. Ray began on the feeder with bread hook bait and it wasn’t long before he bagged his first slab. He then switched to red maggot and kept the fish coming throughout the day. Runner-up, Julian Borkwood had a great start, netting four bream in the first hour but only managed two more to scale 25-8-0. Trevor Bishop fished the feeder at fifty turns with red maggot and struggled for most of the match but four late bream propelled him into third with 10-5-0.