Reports on angling matches from the week ending 27 August 2016.

45 teams of ten lined the banks of the Tidal and Non-Tidal Trent from Holme Marsh, Nottinghamshire running north to Torksey, Lincolnshire for Saturday’s Angling Trust Division One National Championships 2016. The highly talented Drennan Barnsley Blacks had performed well in the practise matches and were in high spirits before the event despite the atrocious weather forecast, predicting 40 mph winds and rain to come throughout the day. Although they had no section wins, after putting in a solid team performance with every angler achieving more than 30 points, Drennan Barnsley Blacks proved victorious with 380 points. Strong, gusty winds had made it extremely difficult to target the roach on float tactics but local knowledge was key for the runners up and third placed teams with Lincoln & District AC securing second on 367 points, from Scunthorpe Tackle’s 345. The top individual placings came from the favoured low numbers in the weir field at Holme Marsh and Rob Perkins (Matrix Dynamite Trentmen) led the way with a 40K 620g top weight, comprising of 22 bream, taken on a groundbait feeder with chopped worm and caster, fishing worm tipped with red maggot on the hook at peg B17 (permanent peg 8). Daiwa Gordon League’s Shaun Bryan followed on peg B19; also bream on the feeder for 30K 350g, ahead of Andy Dixon (Lincs. County) who scaled 23K 120g of skimmers at Dunham peg H17. Wayne Parker (Swindon Isis AC), Alan Henry (Scunthorpe Tackle) and Mark Perkins (Derbys. Angling Fed.) completed the frame with 19K 840g, 17K 450g and 16K 800g respectively.

Wayne’s back on top on the Severn in Bridgnorth

A good field of 43 anglers turned out in support of Sunday’s Bridgnorth AS Poppy Appeal Open held on the Linley Bank stretch of the River Severn in Bridgnorth, Shropshire. The river rose almost three inches during the match but was still low and clear so it was a welcome bit of water. Local rod and mad keen Saddlers supporter Wayne Rolston (Bridgnorth AS) notched up his second win of the season with a hearty 33-12-0 net consisting of seven barbel, snared on the pellet feeder from peg 46, on the mud flats. Tony Moreton (Preston Innovations) finished one fish shy with 30-15-0, consisting of five big chub caught on the caster and hemp feeder, fished right over and a brace of barbel captured on the pellet feeder at peg 148 on the day ticket waters, down the golf course. Gornal’s Colin Jones secured third at peg 49 in the rapids with five barbel and one chub caught on the pellet feeder for 27-4-0. Richard Buxton (Bilston Angling Centre) made fourth with 26-8-0, edging Jim Wiltshire (Barford AA) into fifth with 26-2-0. Plenty of other double figure weights followed. The anglers along with other donations raised £160 for the noble cause.

The latest Wednesday evening Fishermania Open on the Branston Golf Course section of the River Trent in Burton-upon-Trent, East Staffordshire fished hard due to a very low and clear river and intense heat. Nevertheless, Nigel Bull (Shakespeare Superteam/Bait-Tech) topped the 19-strong field with 11-10-0 of roach, dace and chublets, gathered on the long pole with maggot over groundbait from peg 22, in the spinney. Ferry Bridge’s Dave Shakespeare came second with 10-2-0 of dace and roach caught on the waggler and stick float, both with maggot from the top section, ahead of Mick Cobb (Fishermania) who ran him close on peg 31 with a level 10-0-0 which included some nice skimmers caught on the waggler with maggot.

The latest Angling Trust & Canal & River Trust Canal Pairs Championship 2016 Qualifier saw 32 pairs set up along the towpath of the Erewash Canal at Long Eaton in Derbyshire. The venue fished well considering it was wiped out by pollution in 2012 but is now back on form due to the hard graft of the Canal & River Trust Fisheries team. Wolverhampton AA VDE’s Neil Turner who has already qualified with brother Paul, topped the individual stakes at end peg 108 with 8-9-0, made up of thirty caster-caught roach to 4oz, a brace of 1½lb bream also to poled caster and a trio of worm-tempted perch just nudging 1lb. Runner-up was local rod Ben Sharratt (Shakespeare Superteam/Bait-Tech) who had 7-14-8 of perch on worm from the weedy Dockholme stretch, Ben and oppo Jason Cunningham have also previously qualified. Polesworth’s James South (Dams & Lock) had 7-8-8 of lobby perch and a few early caster fish for match third. James’ achievement aided himself and partner Darren Massey (Shakespeare Superteam/Bait-Tech) to the pairs prize on the day with 56 points to book their place in the final on the 29th October on the Staffs & Worcs Canal in Penkridge, Staffordshire. The other qualifiers are Steve Dudley & Simon Nickless 51; Phillip Cross & Richard Griffiths 50; Pete Scott & Jason Scrivener 49 (9-7-0); Simon Preece & Simon Mottram 49 (9-5-0).

On Saturday, 41 anglers set up in wet and windy conditions along the Birmingham & Fazeley Canal in Erdington, Birmingham for Saturday’s final Angling Trust Division Two National Championships 2016 Practise Match before the main event here on the 10th September Tom Hobbs (Drennan Oxford) ran out a clear winner on peg 23, the end peg on the cables near Wood Lane Bridge, where he had all roach on poled squatt for 8-15-15. Next came Wolverhampton AA VDE captain Paul Turner with 4-15-6 from peg 4, consisting of seven skimmers, two perch and one roach, all to poled caster, leaving Ian Young (Drennan Oxford) in third with mainly small roach and a brace of late bonus perch for 4-6-6.

Hat-trick for Andy on the Calder & Hebble Canal in Dewsbury

Windy conditions and a covering of duckweed on the Calder & Hebble Canal in Dewsbury, West Yorkshire made presentation very difficult at Saturday’s Thornhill AC Open. Slaithwaite AC’s Andy Turner mustered all of his angling prowess on peg 29, to land the match and celebrate his hat-trick of successive wins with 4-1-0 of roach to 8oz, which fell to poled hemp, presented at 12 metres from peg 29. Keith Marshall (Tri-Cast Calder) followed on peg 27 with 3-13-0 of skimmers to 4oz caught on poled caster, fished at 11 metres, ahead of Mick Sharpe (Thornhill AC) who weighed in 3-1-0. 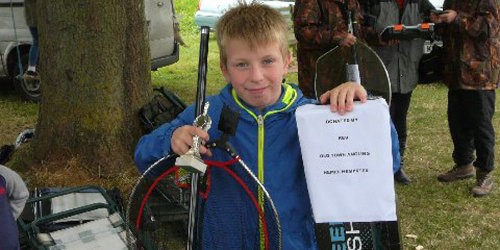 Splendid Tring do their own thing in Marsworth

On Saturday, as part of the Tring Anglers Family & BBQ Day there was a fun two hour match for the children, not exactly fished to Angling Trust

rules but it gives the Trust an excuse to distribute some goodies, kindly donated by Gosford Tackle in Tring, Hertfordshire and Hemel Hempstead Tackle. The match saw nine youngsters set up between Locks 39 and 40 in the Reservoir pound of the Grand Union Canal at Marsworth, Buckinghamshire with help, advice and support on hand from family and friends. Young Toby took the honours with 0-10-12 of skimmers, roach and perch, Josh was hot on his heels with 0-8-8 of roach and perch, ahead of Leela’s 0-8-0 of again redfins and perch (photo below), Matt, Ivy and Erin, with sidekick Amy, followed with 0-4-0, 0-3-0 and 0-2-0 respectively. Well done kids!

Expert bream anglers turned out at Marsworth Reservoir in Marsworth, Buckinghamshire for Sunday’s Tring Anglers/Iain Rennie & Grove House Hospice Charity Match. The conditions were ideal for the bream to feed with the water choppy due to the wind and winner Benny Howell (Colney Tackle) found himself among them, catching fifteen big slabs on feedered mini boilies for a superb 95-5-0 from peg one, in the trees swims. The next two opted for the same approach and a trio of bream gained Bob Walker second with 15-6-0 at peg 4, pipping Darren Millis (BBRT Bait) into third who also netted three bream for 15-3-0 from peg 8. Simon Parvey (Tring Anglers) had a brace of bream on dumbbells for fourth with 11-4-0 at neighbouring peg 7. Bream in all areas showed with some fish going to over 7lb. The two events raised £120 which goes into their ongoing pot to be presented to the Charity at the end of the year.

Les is King for the day at Kingswood

Dudley-based Les Thompson (Matrix) landed Saturday’s Blackfords Progressive Bi-Monthly Open held on Kingswood Lake in Cannock, Staffordshire. The top three weights all consisted of roach and skimmers, both species around the 12oz mark. Drawn on peg 36, Les used the long pole with worm and caster over groundbait to scale an unbeatable 26-2-0. Walsall’s Dave Nicholls followed on next peg 37 where he fished the feeder, short with caster and worm with worm on the hook for 22-10-0, ahead of Gary Johnson (Sensas) who did the same for 21-9-0 at peg 38. The fourth spot went to Gary’s teammate Kevin Tipton who fished the feeder with worm over groundbait off peg 13, to return 18-7-0 of bream to 2lb plus skimmers.