Reports on angling matches from the week ending 24 September 2016.

On Sunday, the 60-peg sell-out Angling Trust Riverfest 2016 Qualifier on the River Wye in Herefordshire was spread out across the Breinton, Bartonsham and Eign Sections and with the river running low and fairly clear, hopes were running high that a large weight of chub or barbel could win the day and the venue certainly didn’t disappoint. Winner on the day and booking his place in the two day final at this location on the 26th and 27th November was Wye regular Steve Williams (Shakespeare Superteam/Bait-Tech) who drew ‘fancied’ peg 16, at the bottom end of Breinton Section where he fished the waggler with caster over hemp to excellent effect in the shallow, pacey water, netting around thirty five chub for a colossal 81-6-0 top weight. Worcester-based river specialist and teammate of the winner Paul Bick drew the peg in Eign Section which won last year’s Qualifier, where he had a great day’s sport, fishing the feeder with hemp and caster to bank half a dozen barbel and eleven chub for an impressive 74-8-0, which sees him safely through to the final as well. Match third was Wrexham’s Phil Davies who was drawn on the Vineyard stream in Eign Section where he fished both float and feeder tactics for an impressive 50-3-0 of chub and barbel. Completing the frame and qualifying from Bartonsham Section was Tim Noke (Alan’s Tackle) who fished hemp, casters and pellets through a feeder to tempt 48-8-0 of barbel from the bottom end of the section. Overall the weights were impressive despite there being some hard areas. The Angling Trust wish to give special thanks to Lee Pritchard and Deron Harper for the enormous effort in the lead up to the event to get the venue ready. Also to all the stewards who volunteered to help take the burden of weighing in away from the anglers. 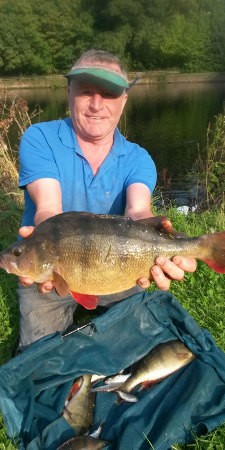 This year’s Burton Angling Festival 2016 was again a sell-out, months in advance. The 78 anglers had to face some testing conditions as the River Trent at Burton-on-Trent in East Staffordshire was more like a chalk stream, gin clear and low with record high weather temperatures for September so things didn’t bode well at all on the fishing front. Tuesday’s day one winner, Yorkshire raider Fred Prudham, from Doncaster, was drawn on peg 2, at the top of Sherratts Farm Section where he fished both the waggler and stick float with bronze maggot for 15-0-0 exact of chunky perch and roach. Runner-up on Shardlow peg 22 was Shakespeare Superteam/Bait-Tech’s Leigh Gardner who fished both the long pole and whip with maggot over groundbait for a 14-8-0 mixed bag. After intense, heavy thunderstorms overnight the river had started to pace up but was still clear for Wednesday’s day two match. Winner, Daiwa Dorking skipper Steve Sanders put in a cracking performance on Ferrybridge peg 2, fishing the long pole with bronze maggot over groundbait for an admirable 13-10-0 of small roach and dace, ahead of Tony Marshall (Shakespeare Superteam/Bait-Tech) who used the same strategy on Andressey island to scale 12-14-0 of all maggot-tempted roach. Thursday’s final day arrived and the river had risen six inches overnight and was carrying a touch of colour. Tony Marshall went one better to win the match off the end peg at Shardlow with 15-12-0 of roach, caught on the bolo with maggot. On the neighbouring peg, Doncaster’s Steve Lowther came second with 14-12-0 of roach taken on the stick float. After strong section placings throughout the festival, Bradford’s Steve Newns took the title of Burton Angling Festival Champion 2016 with 6 points, on paper he didn’t draw that well but fished a great competition and his win was thoroughly well-deserved. Festival runner-up was Sam Merry (Shakespeare Superteam/Bait-Tech) who amassed 8 points. Altogether there were ninety seven cash prizes paid out totalling £9,000. Excellent! Organisers Wayne Swinscoe and Mark Forshew wish to thank sponsors Coors AC, all the stewards; all the staff at Washlands Sports Club and of course Derby Railway AC for the use of their waters.

Bewdley’s Steve Maher, fishing for Sensas WB Clarke, took individual  top billing at Saturday’s 60-peg round two of the Barford AA Teams of Six League held on the Warks. River Avon in Barford, Warwickshire. Drawn on peg 83 in the middle of E Section, Steve set a new league record weight with a monumental 69-8-0 haul consisting of ten barbel and a bonus bream, all caught on the long pole with caster. Runner-up and Steve’s teammate, Ian Winter drew peg 58 in the cutting where he fished the waggler with maggot for 28-0-0 of all chub, ahead of Mike Davies (Match Box) who returned 18-0-0 of chub and barbel at peg 62.  Steve and Ian’s achievements aided their squad to the team spoils on the day with 21 points. Bailey’s of Warwick came second on 24 points, ahead of Shakespeare Superteam/Bait-Tech’s 28 points.

It proved to be tough going at Sunday’s 28-entry Bridgnorth AS National Squad Open on a lowish and quite clear Linley Bank stretch of the River Severn in Bridgnorth, Shropshire; the last open before this coming Saturday’s Angling Trust Riverfest 2016 Qualifier. Drawn on peg 37 in the willows, Wednesfield Angling Centre’s Nigel Ball took the honours with an 18-8-0 net, comprising of one 5lb barbel and a trio of small chub, snared on legered meat, bolstered by 10lb of dace caught on the waggler with maggot. All dace nets to waggler and maggot tactics made the next two placings and Phil Stacey (Bridgnorth AS) came second on peg 82 at Gadston Ford with 13-8-0, ahead of Wolverhampton’s Ian Hingley who returned 10-14-0 at peg 147, on the golf course. John Webb (Bridgnorth AS) was fourth with 9-9-0 and a tie occurred for fifth place when Geoff MacGuire (KDAA) and Keith Russell (Bell Otters) both recorded 8-0-0. 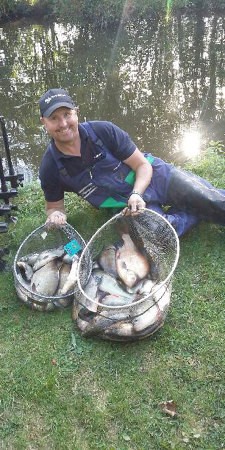 The Shropshire Union Canal at High Onn and Little Onn in Staffordshire were the locations for Sunday’s round one of the Izaak Walton (Stafford) AA/Browning Lifestyle Teams of Six Winter League. Ten squads set up in bright, warm and sunny conditions and the canal was carrying a slight tinge of colour. With the holiday season coming to an end, there was only moderate boat traffic throughout the match. On the individual front, Shakespeare Superteam/Bait-Tech’s Darren Lewis eased to victory with a brilliant 35-2-0 weight of skimmers and perch, tempted on pole-fished caster and worm at Little Onn peg D4, just past the cables. The next two framers also came from the Little Onn length and they also weighed in mainly skimmer nets which also fell to poled caster and worm. Sensas Strike’s Callum Shepherd secured second on pipe peg F2, the first peg into the wood, with another hearty 26-14-0, ahead of Darren Bolton (Sensas Black Country Gold) who scaled 12-10-0 at peg D9. Completing the frame were Richard Guest (Maver Midlands/Wolves) with 12-7-12; Lewis Kenyon (Browning Lifestyle Red) on 11-12-0 and Mark Smith (Maver Midlands/Wolves) in sixth position with 11-2-8. Shakespeare Superteam/Bait-Tech set the pace, taking the team prize on the day with 19 points. Maver Midlands/Wolves followed with 23 points, ahead of Sensas Black Country Gold and Sensas Strike who both amassed 30 points apiece. Browning Lifestyle Red came fifth with 31 points.

The Stuart Campbell Memorial Match on the Calder & Hebble

On Saturday, forty five respectful anglers turned out on the Calder & Hebble Canal in Dewsbury, West Yorkshire for the Stuart Campbell Memorial Match. Bites were at a premium for many due in the most part to the low water level of the canal, nevertheless Steve Crossley (Maver NW) mustered all of his angling prowess on peg 85 where he pole-fished maggot at 8 and 14 metres, to tip 8-9-0 of roach, dace and chub to 6oz onto the scales. Just thirteen ounces split the decision for the next six placings and Warren McLeavy (Tri-Cast Calder) came second on peg 40 where he poled caster at 8 and 14 metres, catching roach and skimmers to 6oz, bolstered by 1lb 8oz tench for 5-14-0, ahead of Chris Roberts (Matrix Halifax) who returned 5-10-8 of maggot and caster-enticed roach and skimmers at peg 35. Next came Simon Wain (Maver NW) 5-7-0, then Chris Storey (Matrix Halifax) with 5-6-0, pipping Jan Verbruggen (Maver NW) into sixth with 5-5-8. Seventh-placed Keith Marshall (Tri-Cast Calder) recorded 5-1-0 and poignantly commented after the match, “It’s been great for us all to get together to remember a good angler and a great bloke. Thanks to Mick Sharpe for organising the event.”

The rain started half an hour before the ‘all in’ at Sunday’s 22-peg King of the Canal 2016 event, staged on the match stretch of the Newry Canal in Omeeth Road, Newry, Northern Ireland. A thoroughly wet day ensued but conditions were not blustery; spirits couldn’t be dampened and the canal didn’t fish too bad at all. Bangor-based Johnny Keith (Matrix) Lurgan) scaled a rewarding 10K 175g of mainly small roach and perch, backed up by a dozen big hybrids and a few skimmers at permanent peg 38, gathered on the feeder with groundbait, maggot, caster and chopped worm. Runner-up Dominic Wilson (Newry Match Anglers) chose the same attack on permanent peg 35 for a similar quarry and 6K 675g, ahead of Johnny McKinley (Matrix Lurgan) who mainly fished the pole with maggot, caster and worm over groundbait off permanent peg 51, to scale 5K 875g of roach, perch and skimmers. Johnny Keith was duly crowned King of the Canal 2016!

Lee leads the way on the Dudley No.1 Canal

Some healthy weights were returned at Saturday’s Woodside AA Open on the Link 51 Section of the Dudley No.1 Canal in Merry Hill, Dudley, West Midlands where Gornal’s Lee Woodhouse notched up yet another triumph when he slid a satisfying 21-10-0 top weight of skimmers to 2lb plus hybrids and shedfuls of ‘motherless minnows’ onto the scales, caught on pole-fished big maggot over groundbait and squatt feed at peg 20. Pole-fishing lobworm and caster off peg 13, Pete Hatton (ZLT Angling Products) followed with half a dozen chub, five of which were between 3 and 4lb, alongside a few perch for second with 16-1-0, ahead of teammate Steve Robson’s 14-10-0 which consisted of four chub, the largest of which was 4lb, the rest being around the 3lb mark, a brace of decent perch and a couple of quality roach plus bits which all fell to poled caster over caster, hemp and chopped worm feed at peg 22. 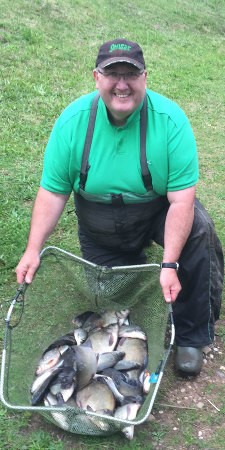 Hat-trick for Kev at Patshull Park

In-form Wednesfield wonder, Kevin Tipton (Sensas) completed a successful weekend’s fishing when he celebrated his hat-trick of wins at the venue, he topped Sunday’s Patshull Park Open on the Great Lake in Pattingham, Shropshire for the third consecutive week. All sections saw action during the 26-peg event and the Hotel Bank produced the top two weights. Opting for slider tactics with various hook baits, fished over groundbait off peg 33, Kevin ran out a clear winner with a splendid 31-4-0 of bream to 3lb. Matt Dawes (Drennan NW/Tri-Cast Weston) followed on peg 30, where he had skimmers on the tip and small roach on the pole for 20-11-0. The third spot was shared equally between Dudley rod Les Thompson (Matrix) and teammate Tim Cadwallader who both brought 16-5-0 of small mixed silvers, to the scalesman. Les had his fish on the pole and the feeder on Boats peg 63 and Tim had all his on the long pole from Boats peg 60.

Blackfords’ match secretary Ian Davies stole the show at Saturday’s Blackfords Progressive Bi-Monthly Open on Kingswood Lake in Cannock, Staffordshire. Fishing the conventional feeder with 6 and 8mm pellets off peg 5, Ian scaled 20-4-0 of bream to 3lb. Streetly’s Mark Greening was runner-up with 18-2-0 of roach, perch and skimmers, captured on the pole with assorted baits at peg 36, leaving Chris Brown (JCB) in third with 15-12-0 of bream around the 3lb mark, caught on the Method feeder with pellet at peg 46. Sensas-backed Kevin Tipton came fourth with 14-14-0 of mainly skimmers, taken on the slider with worm from peg 3.