Reports on angling matches from the week ending 23 July 2016.

Bream bonanza on the Rochdale Canal

Hot and still conditions greeted the forty three anglers at Sunday’s Staffordshire Championships 2016 event on the Stafford Boat Club stretch of the Staffs & Worcs Canal in Stafford, Staffordshire. The fine weather also meant that there was lots of heavy boat traffic to contend with. Penkridge-based heating engineer Nigel Clayton (Browning Lifestyle) filled the individual top spot on peg 39, where he brought a trio of caster-tempted chub to 4lb to the scalesman for 11-9-6. Runner-up on peg 47 was Bloxwich rod Martin Owen (Sensas Black Country) who returned a level 10-0-0. Martin also poled caster and netted one skimmer and one perch, both around the 1½lb mark, the remainder of his catch being roach. Sensas Strike’s Andy Newton came third with three bream to 2½lb plus bits, all caught on pole-fished squatt and pinkie presented over groundbait for 9-10-8 from peg 38. The winning team on the day with a combined weight tally of 28-15-10 was Sensas Black Country. The photo shows Sensas Black Country (from left to right), Mark Appleby, Simon Nickless, Steve Dudley and Martin Owen. 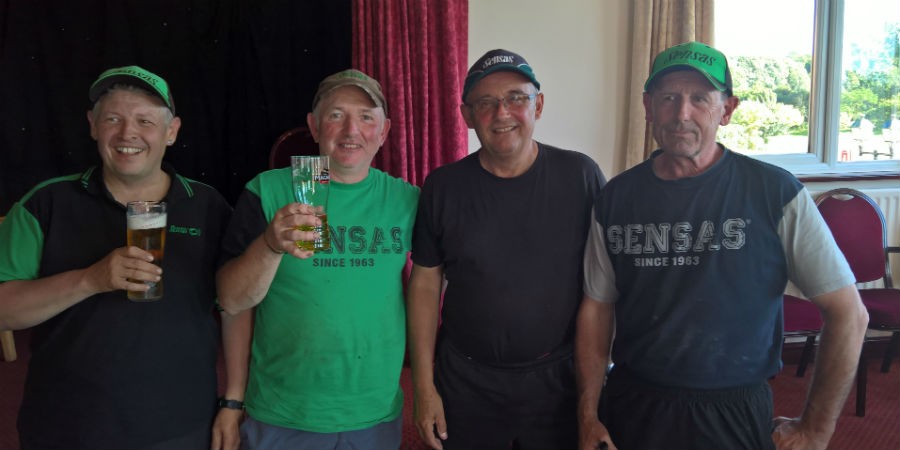 Sixty five respectful anglers set up along the towpath of the Bridgewater Canal in Leigh, Lancashire for Saturday’s Lauren Pilkington Memorial Match where local rod Danny Martin (Wigan MG) took the honours with a clear win on peg 48 on the Volex length with an admirable 17-13-8 net consisting of a brace of bream, two tench alongside 6lb of roach and perch, gathered on pole-fished bread, hemp and worm, Danny’s teammate Dave Walmsley followed with all bread and hemp-enticed roach for 12-1-0 from peg 5 in the same section, leaving Micky Rogerson (Preston Innovations) in third with 11-14-0. A total of £300 was raised for Leigh Junior Ospreys AC.

It was tough going due to the bright, sunny conditions on the Calder & Hebble Canal in Dewsbury, West Yorkshire during Saturday’s Thornhill AC Open however Andy Turner (Slaitwaite AC) mustered all of his guile on peg 74 to take top billing with 7-11-0 of pinkie and hemp-tempted roach to 8oz. A family affair occurred for the next two placings with father John Wrozsek (Wakefield AC) earning the bragging rights over his son, when he poled caster at 14 and 12 metres off peg 43, to net a 3lb bream plus skimmers and roach to return 6-4-0. John’s son, Canal & River Trust’s Luke Wrozsek (Dino Floats) had to settle for third on neighbouring peg 44, where he poled maggot and caster for 5-11-0 of roach and skimmers.

On Sunday, Bridgtown Social AC fished Chubb’s Water of the Staffs & Worcs Canal in Ball Lane, Coven, Staffordshire where Cannock rod Colin Tillet stole the show on peg 7 when he poled caster and worm, which brought him a brace of bream, the best being 2½lb, a 2lb perch together with smaller stripeys and mixed silvers for 8-7-0. Runner-up on peg 9, Jason Edmunds banked two bream on poled caster in the first ten minutes, backed-up by small pinkie-enticed roach and gudgeon, to return 6-11-0, ahead of Stu Brailsford’s 4-1-0 of varied small caster and maggot fish from next peg 8.

Bernie bolts past the rest on the Trent & Mersey at Middlewich

Sunday’s 18-peg Crewe & District AA Open on the Trent & Mersey Canal in Middlewich, Cheshire saw Browning Lifestyle’s Bernie Leatherbarrow lead the way on peg 3 in the Ideal Standard length with 13-9-0 of all hemp-roach. Over 4lb shy came Wayne Holbrook (Dave’s of Middlewich) who scaled 9-2-0 at next peg 4, which included a 2lb perch, the rest being bits to poled squatt and pinkie, leaving Gordon Griffiths (Team Guinness) in third who slid 8-11-0 of pinkie-roach into his keepnets at Roots peg 1, in the same area.

Woodhouse is back on form at the Woodside AA Open

After a few years break, Gornal’s Lee Woodhouse was back on top form when he won Saturday’s Woodside AA Open on the Link 51 Section of the Dudley No.1 Canal in Merry Hill, Dudley, West Midlands by a clear margin. Pole-fishing caster over groundbait off peg 20, Lee netted a 2lb chub, boosted by 9lb of skimmers, the rest of his 17-13-7 top net being made up of squatt-fish. Richard Knowles (Shakespeare Superteam/Bait-Tech) was bridesmaid once more on peg 10, where he poled pellet and dead maggot over pellet feed for 13-6-3 of skimmers with lots of hybrids. Andy Newton (Sensas Strike) came third with 10-5-4, consisting of a chub pushing 3lb together with skimmers, all attracted on pole-fished pellet, worm and caster at peg 22.

Saturday’s 23-peg Stoke City DAA Open on the High Bridge to the Cables length of the Shropshire Union Canal at Norbury Junction, Staffordshire saw local rod Eric Gardner (Team Eclipse) rise to the fore on peg 75, with 12-0-0 of caster and maggot-enticed skimmers and roach. Drawn on next peg 76, Wolverhampton AA VDE captain Paul Turner followed with a comparable quarry, all to poled caster for 10-14-12, ahead of Dean Williams (Team Eclipse) who also had mainly skimmers and redfins to poled squatt and pinkie, to return 7-9-5 at peg 74.

Stefan ups his game on the Lancaster Canal

Hot doesn’t even begin to describe the conditions that greeted the anglers at the penultimate match of the Ted Carter Lancaster Canal Tuesday Evening Series. With the temperature still at 30oC as the match started at 6pm the anglers sweltered as the fish seemed to be put down by the heat. The match was pegged out all to the south side of Dimples Lane Bridge in Garstang, Lancashire and by not pegging Castle Basin it was uncertain where the match might be won as many pegs on this section had previous records of taking top spot. Having taken second place last week Stefan Gent (Maver NW), went one better this week to take the honours on the night. Stefan was pegged on the neck of Castle Basin and recorded a weight of 10-6-0 comprising mostly good sized skimmers. Second was Chris Gorrell (Ted Carter Southport). Chris was pegged just through the wires and had 7-2-0 of mostly skimmers and hybrids. Third place went to Steve Wilson (Lancs. MG) from a peg just before the bend. Steve recorded a weight of 6-8-0 that again comprised skimmers and hybrids. With one match to go in the series the point table has tightened up considerably with just 11 points separating the top 6. Daz Shaw still leads the way but his lead is now cut to just 3 points from both Steve Wilson (Lancs. MG) and Steve Embury (Saints). So, very much all to play for going into the final round.

Halesowen RBL set up around the Bridge and Willow Pools at Blythe Waters in Knowle, Solihull, West Midlands for their Sunday encounter. Drawn on Bridge peg 8, which is the peg that holds the fishery record set by Steve Ringer a while ago, winner Martyn Yarsley wasn’t disappointed when it again produced for him when he poled corn and meat to tip a satisfying 107-0-0 haul of double figure carp onto the scales. Runner-up on Willow peg 4 was Sean Waite who poled pellet over dead red maggots in the margins for 95-10-0 of carp, ahead of Richie Owen who fished the pellet waggler, then paste on his edge line at Bridge peg 32, to record 78-6-0 of mainly carp.

Thirty anglers contested Saturday’s latest Angling Trust & Canal & River Trust Stillwater Championship 2016 Qualifier staged on the Engine Pool at Earlswood Lakes in Solihull, West Midlands. Warm and breezy conditions meant that both banks fished evenly. As usual the top weights were carp but the lower numbers did produce bream. The top weight was Acorn Angling’s Tony Brooker’s 35K 360g of all carp taken on the Method feeder with orange dumbbells at peg 25. Close behind came Preston-based Jon Slocklet with 33K 260g of all carp with the exception of one bream, again taken on the Method feeder but with yellow banders. Glenn Maxwell (Alverchurch Fisheries) qualified in A Section with 11K 460g of bream only. Joining Tony, Jon and Glenn in the final at Boddington Reservoir, Northamptonshire on Sunday 7th August 2016 will be Phil Copley, Joe Bonas, Snowy Ashington, Richard Edmunds, Kerry McMahon, John McNicholas and Neville Bailey. 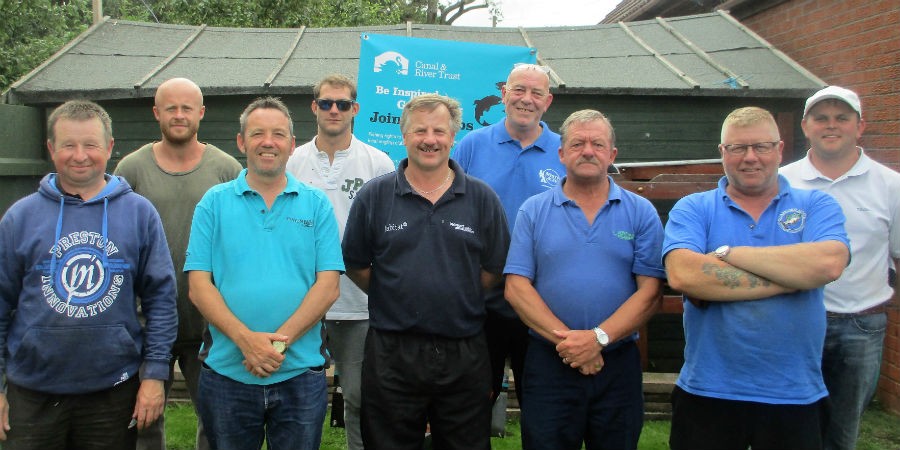 Wayne Rolston (Bridgnorth AS) headed the 32-strong field at Saturday’s Kidderminster & District AA Open on the River Severn in Bewdley, Worcestershire. Deploying the pellet feeder off peg 4, Wayne bagged five barbel, bolstered by 10lb of roach for an unassailable 34-0-0 exact.Brian Rigby (Shakespeare Superteam/Bait-Tech) came second with a trio of pellet-tempted barbel plus 12lb of silvers on the stick for 28-11-0 from peg 59, edging Richard ‘Bucko’ Buxton (Bilston Angling Centre) into third on peg 71, where he had three good barbel on meat and pellet for 24-14-0. The river had been at 0.68 metres and falling during the match making it perfect for all methods. Seventeen good weights of over 11lb were recorded spread throughout the match length which was great to see.

The River Trent at Burton-upon-Trent in East Staffordshire was at normal summer level for the first time this season and the fishing improved slightly during Sunday’s latest Drennan Coors Masters 2016 Qualifier/Alzheimer’s Research Charity Match 2. River specialist John Harper (Fishermania) led the way on Sherratts peg 7 with 14-12-0 comprising of half a dozen maggot-tempted skimmers to 1lb plus roach and perch to waggler and whip tactics. The photo shows John Harper with his match catch. 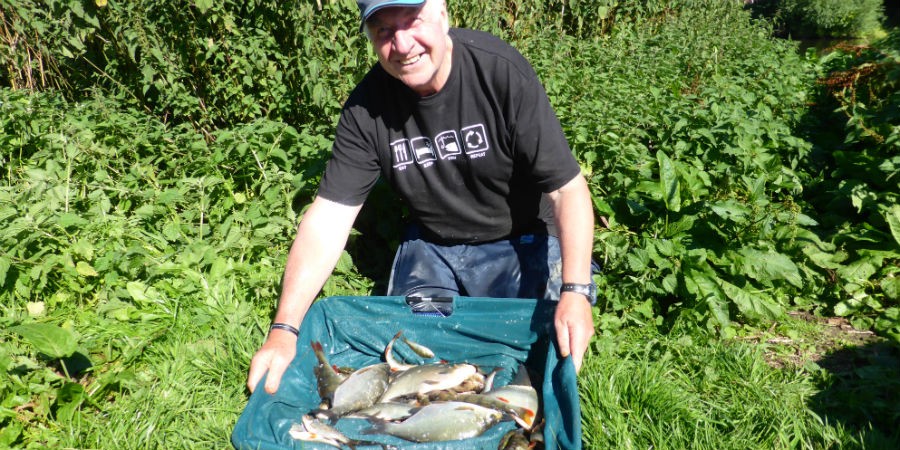 Doncaster’s Harvey Clapham followed on Municipal peg 8, where he fished the waggler with maggot and caught a 2lb perch, the rest of his 12-4-0 net being made up of roach. The third spot went to Tony Beech (Van den Eynde Quorn) who pole-fished maggot off Sherratts peg 5 for 8-14-0 of roach and perch. Harvey has already qualified but joining John and Tony in the final on 25th September 2016 will be Andy Fox, Rob Birks, Pete Hamilton, Ian Ward and Steve Roach. A grand total of £670 was raised for the noble cause.

Form pegs dominated at Saturday’s 27-peg Redditch Federation Open on Arrow Valley Lake in Redditch, Worcestershire. Winner Ben Sutor (Astwood Bank AC) had all bream to 4lb on soft pellet at 13 metres from peg 69 to scale 44-3-0, after not catching on the tip to the fish refuge, which usually produces on this peg. The next two framers both fished the Method feeder to the island and also netted all bream. Steve Maher (Maher Floats) came second with 40-2-0 at peg 54, leaving Paul Jones (Black Country Men) in third with 30-3-0 from adjacent peg 55.

Some hearty bream weights were returned at Saturday’s Blackfords Progressive Bi-Monthly Open on Kingswood Lake in Cannock, Staffordshire where the top three all chose a slider with worm and caster approach and all caught bream to 3lb. First home on peg 43 was Cannock’s Steve McQueen who scaled a healthy 41-6-0, ahead of Blackfords’ own John Burns who weighed in 36-2-0 at peg 40. Third place went to Steve Preece (M&S Joinery) who bagged 22-4-0 on peg 36.