Reports on angling matches from the week ending 20 August 2016.

The fourth and final round of the Browning Lifestyle/Stafford Izaak Walton Teams of Five Summer League saw seventy anglers set up along the towpath of the Shropshire Union Canal at Norbury Junction in Staffordshire. Ted Carter Southport’s Chris Gorrell took the individual spoils at peg B1, on the cables length, with 10-9-14 of skimmers and perch, which fell to poled worm and caster. The next two in the frame also chose the same tactics and Sam Rushton (Sensas Black Country) came second at peg B11, on the cables, where he returned 9-6-4 of roach and skimmers, leaving Ant Marsden (Wigan MG) in third with 9-2-2 of perch and roach from peg E12, on the aqueducts. Jason Cunningham (Shakespeare Superteam/Bait-Tech) secured fourth with 8-14-0 at peg B7, ahead of Lewis Kenyon (Browning Lifestyle Red) who weighed in 8-4-8 on peg C7. Top team on the day was Sensas Black Country with 22 points but after a strong performance throughout the competition, Shakespeare Superteam/Bait-Tech could not be thwarted and topped the league podium on 110 points, from Wolverhampton AA VDE’s 112. 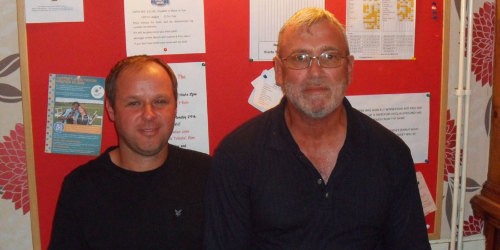 The Birmingham & Fazeley Canal in Minworth, Birmingham hosted Saturday’s latest Angling Trust & Canal & River Trust Canal Pairs Championships 2016 Qualifier. Drennan Oxford’s Mick Denton headed the 82-strong field with ten bream to poled caster and worm for an admirable 20-13-0 top catch at peg 71, by the concrete bridge at Forge Lane. Hot on his heels was Ian Young (Sensas MAS) with another ten bream to the same baits for a hearty 19-8-4 from peg 83, on the roots at Forge Lane, ahead of Simon Roberts (Sensas Strike) who netted eight bream, also attracted to worm and caster, to bring 15-4-8 to the scalesman at peg 67 at Forge Lane. Les Waldron slotted into fourth with 14-10-0, ahead of Tony Foster (Dams & lock) who weighed in 9-14-0. Pelham’s Les Waldron and partner Michael Gorry were the top double act on the day with 77 points. Joining them in the final on the Staffs & Worcs Canal in Penkridge, Staffordshire on the 29th October are the other qualifying pairs who are Mick Denton (Drennan Oxford) and Tony Hobbs (Drennan Oxford) 73, Paul Cowern (Browning) and Damian Green (Maver Image) 68, Simon Roberts (Sensas Strike) and side-kick Derek Jackson (Dams & Lock) 68, along with Ian Young (Sensas MAS) and Tommy Boyce (Sensas MAS) 65 (23-5-4). The photo shows winning pair Les Waldron and Mike Gorry.

The New Junction Canal in Doncaster, South Yorkshire appeared in great condition with a good tinge of colour with fish topping all around the anglers before the start the Angling Trust & Canal & River Trust Canal Pairs Championship 2016 Qualifier. Expectations were that the match would be dominated by nets of roach, however very few redfins were caught so the competitors had to target the skimmers and perch which proved more obliging. The top four anglers all caught bream on the feeder and perch on the long pole. Heading the individual stakes on peg A10 was Paul Hughes with 17-0-0, ahead of Pete Kitwood who scaled 13-9-0 at peg B11. The third spot went to Steve Williamson who banked 8-14-0 on peg A8, leaving Vincent Ley in fourth with 8-5-0 from peg A12. The qualifying pairs off to the Staffs & Worcs Canal in Penkridge, Staffordshire on the 29th October are Barry Howgate and Steve Williamson 18, Pete Kitwood and partner P. Kerr 17, Paul Hughes and oppo Liam Killinger 16, G. Smith and G. Slack 13, along with Dave Frost and Vincent Ley 12.

Brum Faz bream do the job for Peter

The Stirrup Cup Waters of the Birmingham & Fazeley Canal in Curdworth, Warwickshire was the venue for Sunday’s 42-peg Angling Trust Division 2 National Practise Match and Sensas Strike’s Peter Cox topped on paper peg 33 with five bream to poled caster and worm for 9-14-0. Darren Bolton (Sensas Black Country) had a trio of bream on poled caster and one big worm-tempted perch plus bits for second with 8-0-3 from paper peg 23, ahead of Neil Burrows (Slaithwaite AC) who had a brace of bream, a few skimmers and small silvers also on pole-fished fished caster and worm to scale 7-6-4, on paper peg 7.

Andy’s on a roll on the Calder & Hebble in Dewsbury

Slaithwaite AC members filled the top two placings at Saturday’s Thornhill AC Open on the Calder & Hebble Canal in Dewsbury, West Yorkshire. Andy Turner celebrated back-to-back wins when he made the grade on peg 21 with 7-6-0 of roach to 8oz, gathered on pole-fished hemp, presented at 8 metres. Teammate Martin Lagborough came second with 6-13-0 at peg 29, where he poled squatt and hemp for roach and skimmers to 10oz. Keith Marshall (Tri-Cast Calder) claimed third with 4-7-0.

Bert’s unbeatable on the Shroppy at Wheaton Aston

Dave’s back on top on the Walsall Canal in Tipton

It was back to winning ways for Dave Anderson (ZLT Angling Products) when he landed Saturday’s Sportsman AC Open on the Walsall Canal in Ocker Hill, Tipton, West Midlands. Pole-fishing bread punch off peg 12, Dave returned 7-7-5 of roach. Sportsman AC teamsters followed with Gary Atkins claiming second on peg 3, with 6-15-0 of pellet-enticed bream, leaving match organiser Dave Arnold in third with 6-7-10 of roach and skimmers which fell to poled pinkie and squatt at next peg 2. 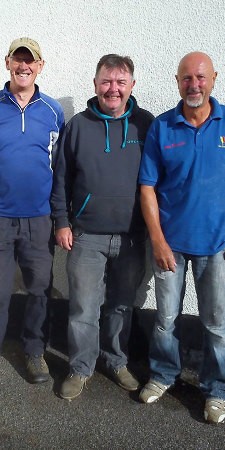 Saturday’s latest 60-peg Angling Trust Riverfest 2016 Qualifier was held on the River Trent at Rolleston and East Stoke and also Newark Dyke in Nottinghamshire. Drawn on East Stoke peg 27, Tibshelf’s Pete Bradshaw started on the pole catching 7lb of quality roach to1lb, then switched to the feeder and bagged a superb 7lb bream, a decent perch and more roach to claim the winner’s purse with a 24-10-0 top weight. Runner-up Adey Reynolds (Quorn AS) fished the pole with maggot and hemp at distance from Rolleston peg 1 for 17-14-0 of mainly skimmers and roach, ahead of Simon Heaton (Dynamite Matchman Supplies) who started on the feeder and had one skimmer, before changing to the waggler with maggot and caster, catching predominantly chub, the largest of which was 3lb, for third with 15-15-0 from peg 46 on the Dyke. As the top three in the match headed the three sections, they all qualify for the two day final on the River Wye in Herefordshire on the 19th and 20th November. The photo shows the qualifiers, (left to right) Simon Heaton, Pete Bradshaw and Adey Reynolds. 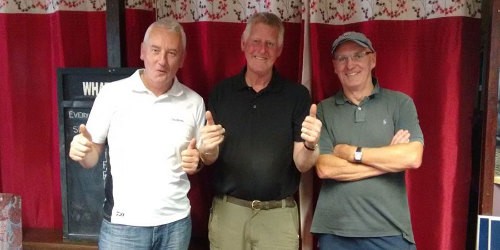 In-form Bromsgrove rod, Chris Taylor eased to victory at Saturday’s latest Preston Innovations Feeder Masters 2016 Qualifier held on the Kidderminster & District AA Waters of the River Severn in Bewdley, Worcestershire. The top three in the match all had barbel on the pellet feeder. Chris secured a solid triumph on peg 75 to head Zone C with 27-12-0 to book his place in the two day final on the 24th and 25th September at Bough Beech Reservoir in Edenbridge, Kent. Kevin Jones (Bridgnorth AS) was match runner-up and also topped Zone A to secure his place in the final with 16-6-0 at peg 32, leaving teammate Gary Cain in third, having scaled 15-4-0 on peg 26. The fourth match place went to Mick Smith with 14-14-0 of barbel and perch from peg 4. The other qualifier is Jim Wilson who headed Zone B with 6-1-0 at peg 63. The photo shows the three qualifiers. 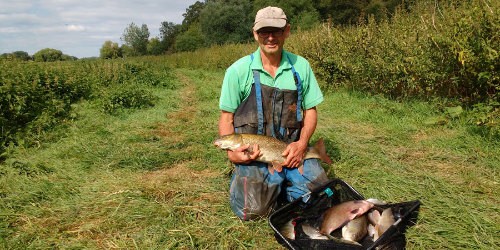 Specimen Trent barbel boosts Nick to the top at Burton

The River Trent at Burton-on-Trent, East Staffordshire has been improving week on week during the Drennan Coors Trent Masters 2016 Qualifiers series and a few skimmers are now showing to. Nick West (Dynamite Matchman Supplies) topped Sunday’s 74 pegger with a 22-8-0 net, made up of a huge specimen barbel, a brace of chub, three bream and a couple of perch all to stick float and maggot at Bailey’s peg 33. In-form Adey Reynolds (Quorn AS) came second on Broadholme peg 18 where he fished the long pole with maggot and hemp for 17-7-0 of quality roach, nudging Nigel Bull (Shakespeare Superteam/Bait-Tech) into third by one ounce when he recorded 17-6-0 of roach, dace and chub, snared on the stick and waggler, both with maggot at new peg, Bailey’s peg 29. The qualifiers for the 25th September final are Nick West, Jim Marcer, Adey Reynolds, Spig Pawlowski, Andy Taft, Chris Buckingham, Terry Trueman and Mark Halksworth.

‘Lucky Jim’ noses ahead on the Severn at Bridgnorth

The Linley Bank stretch of the River Severn in Bridgnorth, Shropshire was very low and clear during Sunday’s 44-entry Bridgnorth AS Association Match and it was a close call for the top two who both banked five good barbel apiece on the pellet feeder. Barford AA’s Jim Wiltshire just edged it on peg 134, above the golf course, with 32-10-0, nudging Bromsgrove’s Chris Taylor into second with 32-2-0 from peg 63, above the fallen ash. On his holidays, down from Droylsden in Gtr. Manchester, Roy Thorley secured third with four proper barbel also taken on the pellet feeder for 24-8-0 at peg 28, in the island bay, pipping Dan Shinton (Bridgnorth AS) into fourth who had mainly chub on the swim feeder with caster and hemp, to scale 24-2-0 on peg 83 at Gadston.

Graham grasps the glory on the Great Lake in Pattingham

A closely fought battle ensued at Sunday’s 24-peg Patshull Park Open held on the Hotel Bank and Deeps Sections of the Great Lake in Pattingham, Staffordshire where the Hotel Bank returned the three best weights. St. Helen’s visitor, Graham Hallows just made it by three ounces with 14-6-0 of roach, perch and skimmers, snared on poled worm over caster, worm and groundbait at peg 26. The next two framers chose the same strategy for comparable catches to the winner and Tim Cadwallader (Matrix) took second with 14-3-0 from peg 40, ahead of Andy Amos (Tri-Cast Weston/Drennan NW) who recorded 13-4-0 at peg 30.