Reports on angling matches from the week ending 2 July 2016.

The Winnall length of the River Severn near Bewdley in Worcestershire which hasn’t been match-fished for around twenty years was the venue for Wednesday’s Kidderminster & District AA Open where the anglers were met by a river, still high at 1.1 metres. In what proved to be a tough encounter, Halesowen’s Mark Jones headed the field with a 13-6-0 net, comprising of one barbel and mixed silvers, taken on a worm and caster feeder at peg 22. Runner-up, Dave Hollands (Sensas Portway) chose the same approach on peg 18 in the spinney for a mixed 7-13-0, ahead of Tenbury’s Dave Williams who did the same to scale 4-5-0 at peg 2.

On Saturday, a respectful turn-out of fifty four anglers lined the banks of the River Severn in Bewdley, Worcestershire for the Pete Williams Memorial Match where well known Middle Severn expert, Tenbury’s Dave Williams took the honours on peg 86 with four barbel, bolstered by roach for a 22-7-0 top net, snared on the feeder with pellet and caster. Gary Weaver (Halesowen RBL) followed with a trio of barbel, caught on the maggot feeder to record 20-9-0 at peg 94. Worcester rod Tim Noke finished just behind on peg 40 with another three barbel, gathered on legered meat, to bring 19-8-0 to the scalesman. From left to right, the photo shows Dave Williams being presented with the Memorial Shield by Pete’s son Steve Williams. 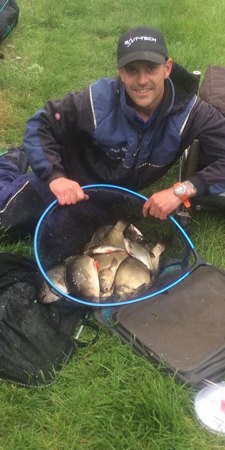 Sam’s making ‘Merry’ on the Soar at Sutton Bonington

After looking in perfect condition the previous day, the River Soar at Sutton Bonington, Nottinghamshire rose rapidly following heavy overnight rain before Sunday’s 57-entry round one of the Sensas Soar Masters. The river was carrying a lot of floating debris and a gusty wind made presentation difficult. Nevertheless, Leicester-rod Sam Merry (Shakespeare Superteam/Bait-Tech) mustered all of his guile on peg 24, to net three good bream on the feeder with worm, boosted by some quality perch gathered on poled chopped worm down the margin for 13-14-0 to secure his spot in the final on the 18th September 2016. Loughborough Soar’s Dave Kimber followed on peg 29 where he had two good tench on pole-fished chopped worm, alongside small roach and perch, caught on poled maggot over groundbait for 9-13-0, pipping Cameron Hughes (Rive/Starlets) into third who had 9-11-0 of small fish on pinkie and caster over groundbait under a flat float from peg 4. Cam also qualifies for the final. The other qualifiers are Sean Ashby, Darran Bickerton, Pete Scott, Jamie Tarplee, Neil Fisher and Dave Petch. The photo shows Sam Merry with his winning net. 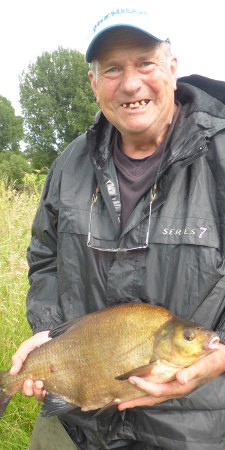 Sunday’s 33-entry Drennan Coors Trent Masters Qualifier 2016 took place on the River Trent in Burton-on-Trent, East Staffordshire. Although the river was above summer level at 1.6 metres, it fished reasonably well with some good roach catches being recorded plus plenty of small 2 to 6oz chublets being caught. Winner, Steve Hardwidge (Coors AC) had a netful of roach and chub, snared on the stick float with maggot from Bailey’s Section to book his place in the final on the 25th September 2016. Joining Steve in the final will be runner-up Harvey Clapham (Doncaster) who topped Municipal Section with all roach to waggler and maggot for 10-10-0, as will Rob Quinn (Shakespeare Superteam/Bait-Tech) who again had all redfins using stick float and waggler tactics to scale 10-6-0 in Bailey’s Section. The other qualifiers so far are Wayne Swinscoe, Paul Bick, Dave Shakespeare and John Hardwidge. The photo shows John Hardwidge with a 6lb bream he caught in the match.

Promising start on the Severn at Bridgnorth

Sixty eight anglers lined the Linley Bank Section of the River Severn in Bridgnorth, Shropshire for Sunday’s Bridgnorth AS National Squad Open. The river was not quite at summer level with the last foot still to go down. Barbel and lots of chub were caught with quite a few mature roach also being netted. Severn veteran, Billy Mitchell (Bell AC) led the way on Bottom Willow peg 42 with five barbel, the largest being 7lb, captured on the straight lead with meat for 30-4-0. Richard ‘Bucko’ Buxton (Bridgnorth AS) was hot on his heels with a level 28-0-0 consisting of a trio of barbel to 7lb plus loads of chub to 4lb, caught on a small pellet feeder at peg 28, above the island in Linley Bay, leaving Chris Holmes (Middle Severn Angling) in third on Little Gadstone peg 105, where he used feeder and float tactics to record 22-11-0 of again barbel and chub.

The Warks. River Avon in Barford, Warwickshire was a few inches on with a tinge of colour at Saturday’s inaugural 30-entry Barford AA Open of the season. River conditions were perfect for the chub to feed and they didn’t disappoint. Paul Caswell (Sensas WB Clarke) took full advantage of his peg 70 fast, shallow swim, mid-way along the stretch where he fished the stick float with maggot for a cracking 29-8-0 top weight of chub and dace. A tie occurred for second when Paul’s teammates, Ian Winter and Adrian Narbeth both returned 24-4-0. Drawn on peg 96, Ian fished the waggler with maggot catching all chub and dace while Adrian used both feeder and waggler tactics on peg 64 to snare barbel backed-up by a few dace. Sensas Portway’s Darren Barrett had all dace and chub on the stick with maggot for fourth with 19-10-0 at peg 68.

Shroppy win for Derek at Norbury

The Saddle Bridge Section of the Shropshire Union Canal in Norbury, Staffordshire saw action during Saturday’s Stoke City DAA Open where Derek Jackson (Dams & Lock) took the spoils on peg 34 with a 6-14-12 net made-up of worm and caster-enticed perch, roach and skimmers. Wolverhampton’s Dave Richards (Four Ashes AC) slotted into second, pole-fishing caster and pinkie off peg 21, for 5-6-2 of roach and perch, nudging Browning Lifestyle’s Paul Murrin into third with 5-3-4 of roach and skimmers, collected on poled squatt and pinkie at peg 33 next to the winner.

The Matlock stretch of the Erewash Canal in Langley Mill, Derbyshire fished quite well during Saturday’s 20-peg round three of the Long Eaton Federation Summer League with the majority of weights being made up of perch. However, winner Dave Fowler (Matlock AC) netted five good tench, together with a couple of perch from a peg above Eastwood Lock, worm and caster being the successful baits for an admirable 18-15-0. Will Sully (Long Eaton Fed.) followed with a dozen perch for 7-2-0 from just below the Lock and teammate Alan Wright completed the frame with 6-2-0, consisting of one small tench, three stripeys and small silvers.

Bridgtown Social AC’s Mick Westwood romped home at Wednesday’s Wolverhampton Over 60’s Club Open staged on the Cross Keys Section of the Staffs & Worcs Canal in Penkridge, Staffordshire. Pole-fishing hemp and caster on peg 5, Mick bagged four chub for just over 8lb, the rest of his 15-12-0 top weight being made up of roach to 5oz. Runner-up on peg 10 was Barry Astbury (Pelsall Old Boys) who had all pinkie and squatt-tempted roach for 6-7-0, nudging Lazy Hill’s Terry Blyde into third on peg 4, where he netted one chub plus roach and perch, all caught on his favoured caster bait for 6-5-9.

The Trust's Kev tops on the Staffs & Worcs in Stafford

The Stafford Boat Club and Farmdown Road stretches of the Staffs & Worcs Canal in Stafford, Staffordshire were slightly coloured and weedy in certain pegs during Sunday’s round one of the Browning Lifestyle/Stafford Izaak Walton Teams of Five Summer League. The seventy competitors had to negotiate heavy boat traffic throughout the match and Dudley-based Canal & River Trust operative Kevin Perry (Maver Midlands) topped the individual stakes on peg A10 with over 6lb of perch to 2lb, gathered on pole-fished worm and caster together with 103 squatt-fish for 8-7-4. Close behind came Browning Lifestyle Blue’s Bernie Leatherbarrow with 8-3-10 of small skimmers and roach which fell to red pinkie over squatt at peg B1, ahead of Paul Murrin (Browning Lifestyle Red) who netted three bream to 2lb, caught on poled red worm, boosted by squatt-fish for 7-11-0 from peg C7. Maver Midlands took the team prize on the day with 10 points, ahead of Wolverhampton AA VDE who finished on 25 points. The photo shows Kevin Perry, a very happy man.

Kev tops on the Dudley No.1 Canal

Some healthy weights were returned at Sunday’s Woodside AA Open on the Link 51 Section of the Dudley No.1 Canal in Merry Hill, Dudley, West Midlands. Cradley Heath Labour AC’s Kevin Clark stole the show on peg 20 with a fine 17-7-5 top catch, which included seven decent skimmers, an 8oz perch plus smaller samples, together with lots of roach ranging  from 3 to 8oz, all attracted on pole-fished worm and dead maggot over pellet. Next came Richard Knowles (Shakespeare Superteam/Bait-Tech) who weighed in 13-3-5 of mainly skimmers, gathered on poled pellet and maggot, at peg 15, leaving Dave Sheaf (Canal Kings) in third with around 170 mixed silvers, tempted on squatt, pinkie and maggot over groundbait for 11-11-7 from peg 22.

Back-to-back wins for Daz on the Lancaster Canal

Wet conditions greeted the anglers for the sixth match in the Ted Carter Lancaster Canal Tuesday Evening Series at Stubbins Lane, Catterall nr Garstang, Lancashire. The pegs were all laid out to the north of the bridge and most looked extremely inviting with lots of cover and fish activity. Whilst the conditions kept a few of the 'less hardy' away they did improve as the evening went on and the main protagonists that remained generally enjoyed some reasonable sport on what can be a very tough venue.

The big weights of some recent weeks were never expected as bream rarely show on this section and scratching for small silvers and eels can pay dividends. This was a match where the end pegs came out on top and leading the way for the second match running was Daz Shaw (Maver NW). Daz had 7-6-0 of skimmers and hybrids from the end peg just past the overflow. His margin of victory could have been greater but for a good bream lost at the net. Second on the night was Chris Gorrell (Ted Carter Southport). Chris was on the normally unfancied first peg and amassed a very creditable 6-3-0 of hybrids and roach. Third on the night from a centre peg on the bend was Barry Thomas (Ted Carter Southport) with a 5-6-0 net that included 10 eels.

On Saturday, a Sensas Open was held at Kingsbury Water Park in Kingsbury, Sutton Coldfield, West Midlands to test how the fishing would fare while the pleasure boats were out on the lake. Needless to say with power boats tearing around, sport proved interesting to say the least. Birmingham anglers took the top three placings, all using the conventional feeder wtih worm on the hook. South Yardley’s Kevin Wright eased to victory on peg 12 with nine bream for 33-7-0. Less than a pound decided the outcome for the next two framers but Nigel Franklyn just edged it with a trio of bream plus perch for 13-12-0 from peg 5, leaving Mark Bissett in third when he scaled 12-13-0, consisting of a brace of tench alongside perch and skimmers at peg 11.