Reports on angling match results from the week ending 2 April 2016.

All roach win for Paul at Goldstone

Browning Lifestyle members took the top two placings at Sunday’s Hodnet AC open on the Wharfe Boats Section of the Shropshire Union Canal in Goldstone, Shropshire where less than thirteen ounces split the decision for the top three. Paul Dobing grasped the glory on peg 116 with 5-15-9 of bread and pinkie-tempted roach, ahead of team-mate Mike Manson’s 5-7-4 of bits, bolstered by a welcome 2lb billy at peg 112. Team Guinness’ Bob Campbell secured third with 5-3-0 of small silvers to poled bread from peg 106.

Thursday’s Hodnet AC bout on the Market Drayton Marina section of the Shropshire Union Canal produced some spectacular weights considering that the wintry weather seems unrelenting. Rob Yeomans trounced his rivals on end peg 8 nearest to the mill, where he caught steadily throughout the match, mainly on poled bread punch, to tip a rewarding 26-12-0 of predominantly good quality roach alongside a few skimmers and the odd perch onto the scales. Runner-up on neighbouring peg 9 was Roy Cooper who poled chopped worm to net chiefly all specimen perch to 2lb 6oz for 12-1-0, edging Grant Wilde into third on peg 11, who after a slow start caught a plethora of small squatt and pinkie fish to scale 11-12-0.

The Erewash poses no problem for prolific Posiak

Although sport proved difficult indeed for some at Sunday’s round one of the Erewash Individual Spring League on the Erewash Canal in Cotmanhay, Derbyshire, seasoned campaigner Frank Posiak (Long Eaton Fed.) showed the ‘youngsters’ a thing or two. Ninety years young Frank who is a regular section winner on the canal and seldom misses a match, ran out a clear winner on peg 72 near The Bridge Inn with a brace of tench for 6-6-0, one taken on double red maggot and one on worm. Mill Tackle’s Pete Hamilton followed on peg 103, one below Stenson’s Lock, with four worm-tempted perch for 2-11-0, pipping Harold Toton (Long Eaton Fed.) into third, who netted one worm-attracted 2lb 7oz tench at peg 107.

In the second time of guesting for an absent angler in the Staffs. Individual Aggregate, Stafford-based retired banker Mark ‘Sticky’ Wilton (Angling Trust) celebrated another triumph after also topping round three to win both matches from different ends of the venue. The Gnosall, Staffordshire length was used the Saturday’s 28-peg sixth and final round where Mark caught roach on bread at 4 metres for the first hour, then switched to poled caster against the moored boat for little runs of roach to record 9-9-0 at peg 8. Despite the adverse weather conditions of late, the canal fished exceptionally well. Brownhills-rod Dave Holbrook poled caster on peg 15 to return 7-8-3 of roach and perch for second, ahead of Wolverhampton’s Dave McCall (Shakespeare Superteam) who pole-fished squatt and pinkie off peg 6 for 7-7-8 of roach and gudgeon. The top six anglers all weighed in over 6½lb. After a tightly-fought competition, Crewe-based Lewis Kenyon (Browning Lifestyle) topped the league podium with 13 points to pocket £120 for his achievement. Dean Williams (Team Eclipse) was league second on 14 points and four section wins, leaving Dave Holbrook (Brownhills) in third, also on 14 point with two section wins.

Broome sweeps away the rest on the Staffs & Worcs

After a round one win on the Shroppy, it was back to winning ways for Dudley-based motor mechanic Steve Broome (Bilston Angling Centre) when he drove into the lead at Sunday’s 20-peg round three of the Wolverhampton AA Individual Spring League staged on the Staffs & Worcs Canal in Penkridge, Staffordshire. Setting his stall out for bigger fish, Steve poled his favoured caster bait down the track throughout the entire match, to bring 7-15-0 of quality roach to 1½lb to the scalesman at peg 14. Wolverhampton’s Sam Rushton (Sensas Black Country) came second on end peg 20 with 6-6-0 of small roach and gudgeon to poled squatt and pinkie, ahead of Bilston Angling Centre’s Stan Ward who banked a brace of pinkie-enticed bream in the last half hour of the match for third with 5-2-0 from peg 16. Wednesfield’s Mel Wood (Four Ashes AC) is currently atop the league on 9 points.

Dave gets to grips with the Wombourne chub

Wolverhampton-based air-conditioning engineer Dave McCall (Shakespeare Superteam) blew away the opposition at Wednesday’s Wolverhampton AA open on the Staffordshire & Worcestershire Canal in Wombourne, Staffordshire where the resident chub were in feeding mode. Drawn on end peg 10, Dave poled caster for an admirable 17-11-0 of primarily chub, backed-up by a few perch, ahead of Wolverhampton AA VDE captain Paul Turner who did the same on peg 8 to scale 7-7-0. Bilston Angling Centre’s Wilf Kneller slotted into third with 2-8-0 of caster-chublets from peg 5. 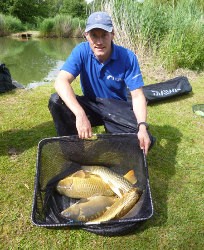 On Sunday, the penultimate round seven of the 28-entry Canal & River Trust Winter Pairs Series went ahead on the Willow and Cherries Pools at Blythe Waters in Knowle, Solihull, West Midlands where the Trust's angling co-ordinator Carl Nicholls took the individual honours on peg W12 with 54-9-0. The anglers all caught chiefly carp and skimmers, mainly on the pole with red maggot over groundbait in the margins, although some fish were caught on soft pellet over micros, offered well out and towards the islands. Blythe Waters’ own Ray Galletly was runner-up with 49-15-0 from peg C22, leaving Adrian Chowns (Halesowen RBL) in third, having scaled 45-7-0 at peg W15. Dynamic duo on the day was Birmingham double act Dean Walton and Martin Walton with 24 points. With everything to play for in the final, Canal & River Trust combo Carl Nicholls and Carl Gill are heading the league stakes on 128 points. Halesowen RBL’s Martyn Yarsley and partner Paul Evans are in second with 118 points.