Reports on angling matches from the week ending 17 September 2016.

On Saturday, 28 teams of ten contested the Angling Trust Division 2 National 2016 on the Birmingham & Fazeley Canal from Erdington, Birmingham to the Stirrup Cup Waters in Curdworth, Warwickshire. The top five individuals all had bream nets, mainly to poled worm with the top three being all adjacent to each other on the Forge Lane stretch in Birmingham. Roger Abnett (Stoke-on-Trent AA) topped a cluster of weights on peg E25 with 14K 870g, ahead of Simon Wain (Slaithwaite AC) who scaled 12K 540g at next peg E24. Matrix Halifax men filled the next three placings with Colin Smith returning 12K 210g at neighbouring peg E23. Colin’s teammates Chris Storey and Martin Taylor then broke the mold when Chris recorded 11k 780g on peg F3 at the back of the Tyburn House PH in Birmingham and Martin weighed in 11K 250g at peg A14 on the Stirrup Cup Waters in Curdworth, Warwickshire. Again it was very tight on the team front but Sensas Black Country AS just grasped the glory with 205 points. Matrix Halifax secured second on weight count back with 204 (48K 470g), ahead of Drennan Oxford who also amassed 204 points and scaled 19K 790g. Browning West Midlands finished fourth on 202 points, leaving Drennan NW in fifth with 201 points. The top five teams are promoted to Division 1.

Canal & River Trust finished in a respectable 13th position with 154 on weight countback. 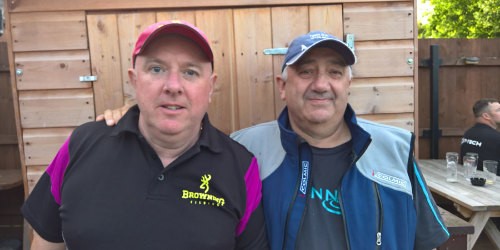 On Sunday, 41 partnerships set up along the towpath of the Trent & Mersey Canal in Rugeley, Staffordshire for the latest Angling Trust & Canal & River Trust Canal Pairs Championships 2016 Qualifier. Weather conditions were sunny and mild and the canal was carrying a fair bit of colour. Some good weights made up the individual frame despite heavy boat traffic. Stourbridge-based Tony Foster (Sensas Dams & Lock) topped the individual stakes on peg 76 with 11-4-8 consisting of nine perch, the largest being around the 1lb mark, snared on pole-fished worm and caster, bolstered by 5lb of squatt-fish. Runner-up on peg 217, was Lawrence ‘Lol’ Breach (Tackle Hub) who poled chopped worm and dead maggots to bank forty perch, the largest of which was a 2lb 8oz specimen, backed-up by a few roach for 10-10-0, ahead of Alan Whalley (Sensas NW) who had five big perch, about 1lb each, plus a brace of big roach alongside smaller redfins, all to poled caster, to return 10-3-0 at peg 201. Fourth place went to Penkridge rod Dave Smith (Bridgtown Social AC) who netted all perch, attracted on pole-fished chopped worm and maggot for 9-8-0 from peg 116, leaving Jimmy Gibbs (Tackle Hub) in fifth with 9-5-0 of all hemp-roach at peg 78. Jimmy Gibbs and Lawrence ‘Lol’ Breach’s achievements saw them top the pairs podium on the day 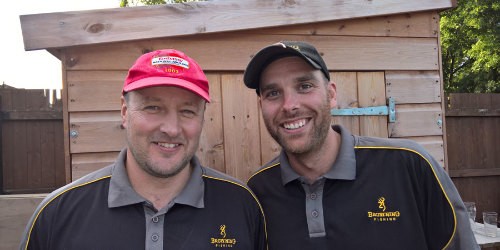 The banter before the draw at Saturday’s 60-entry Angling Trust Riverfest 2016 Qualifier on the non-tidal Holme Marsh stretch of the River Trent in Nottinghamshire was all about the huge bream shoals in the Weir Field length where weights of over 100lb were coming out now that the river is back to normal level. However, a ‘ton-up’ weight was recorded but not made up of the resident bream but barbel! Gwent rod Mark Jones (Tredegar Angling Centre) topped A Zone and his nearest rival by over 100lb when he scaled a colossal 128-10-0, consisting of seventeen barbel caught on the feeder with maggot and caster on the hook. Ady Paddock (Chester Tackle Locker) finished match second on peg 5 in the same zone with 27-8-0 of bream and skimmers, gathered on the groundbait feeder with worm and caster, ahead of venue regular Nick West (Dynamite Matchman Supplies) who topped B Zone with a trio of pellet and caster-tempted barbel for 26-15-0 from peg 62. Zone C went to Mick Nowiki (Garbolino Blackmore Vale) who banked a brace of big bream for 14-2-0 at peg 79. Mark, Nick and Mick will be joining the other Riverfest qualifiers in the two day final on the 26th and 27th November on the River Wye in Herefordshire. 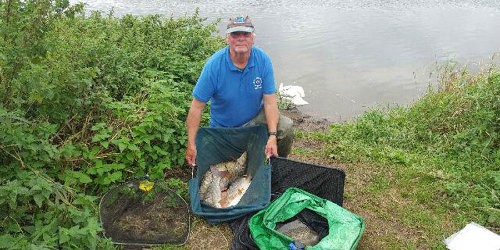 Phil bags up on the Trent at Collingham

Phil Foster (RAF Old Lag/Lincs. County) left the others in his wake at Tuesday’s RAF EMAL match held on the tidal River Trent in Collingham, Nottinghamshire. Drawn on peg 74, Phil fish a blockend feeder with hemp and caster, to bank three small barbel and eleven big whiskers, backed up by small mixed silvers for an admirable 69-6-0. Garbolino RAF’s Baz Bright used the same strategy and the bolo on peg 72, for second with a trio of barbel and small silvers for 16-9-0, leaving Steve Payne (RAF Cranwell) in third with all roach to waggler and maggot tactics for 7-10-0 from peg 82.

Ten squads set up along the banks of the Warwickshire River Avon in Barford, Warwickshire for Saturday’s round one of the Barford AA Teams of Six League. Attleborough’s Dan Wooding took individual top billing on peg 64, in the middle of E Section, with 27-10-0 of chub and barbel caught on the long pole, alternating worm and caster on the hook, over a bed of chopped worm and caster. Runner-up Nigel Davies (Shakespeare Superteam/Bait-Tech) had a 9lb 11oz barbel on the pellet feeder, bolstered by 12lb of dace on the whip to record 21-11-0 at peg 93, edging angling legend Barry Fullford (Avon Club) into third with 21-4-8 of chub and barbel, gathered on pole-fished maggot and caster off peg 54. Lane’s Bait & Tackle took the team spoils on the day with 23 points and a three way tie occurred for the next three placings, all on 28 points apiece, so weight countback came into play for the second and third slots. Attleborough took second with 56-5-0, ahead of Bailey’s of Warwick’s 47-4-0.

70 anglers set up along the Upper Gt. Ouse for the Bedford Hospitals Cup match sponsored by Blunham Angling Club. Thanks go to Vauxhall AC for the use of their waters at Kempston; Bedford AC for Biddenham and Blunham AC for Oakley, all in Bedfordshire. The river was in great form and 22 weights of over 10lb were recorded with roach and dace being the main species caught. Pole tactics or stick float with caster and red maggot were the preferred approach by most anglers and the top three weights all came from Kempston. Alex Graham (Vauxhall AC) took the honours with 24-4-0 and just two ounces decided the outcome for the next two framers. Leicester’s Pete Jeas nosed ahead with 19-10-0 from Paul Chapman (Milton Keynes AA) who weighed in 19-8-0. The next two weights came from Oakley and Steve Drakulic secured fourth 17-5-0, ahead of Tony Watling (Hotrods) whose 16-15-0 gained him fifth place. Winner Alex kindly donated £100 of his winnings to the charity and over £800 was raised on the day.

Del clinches the win on an autumnal River Severn in Bridgnorth

The Linley Bank stretch of the River Severn in Bridgnorth, Shropshire rose six to seven inches during Sunday’s 36-peg Bridgnorth AS Open and was carrying plenty of autumn debris including big sycamore leaves making presentation for some awkward at times. Mill Hill, London visitor and Bridgnorth AS member Del Waite stole the show at peg 14, on the hawthorns at Linley Bank, with four barbel for 21-14-0, caught close in on the pellet feeder. Hot on his heels was Gary Cain (Bridgnorth AS) who banked a trio of barbel around the 7lb mark snared on link legered meat, fished down the sides of peg 61 in the damson fields to scale 21-8-0, ahead of Wolverhampton’s Peter Cartwright who bagged another three barbel plus a few roach, taken on the pellet feeder, presented right over to the far bank off Bush peg 36, below the island. Richard Duke (Middle Severn Angling) and Gornal’s Colin Jones followed with 16-14-0 and 15-12-0 respectively.

Riverfest entrants may be interested in joining the other anglers fishing next Sunday’s Bridgnorth AS Open for a chance to practise before the Angling Trust Riverfest 2016 Qualifier at the venue the following weekend on Saturday 24th September. For last minute entries to Sunday’s open, contact Rosa Bailey on 01746 766774 or 07772 800647. Tight lines everyone!

The fifth annual Jim Hemmings Memorial Match, run by Redditch F.A. in support of the Macmillan Appeal Fund was held on Arrow Valley Lake in Redditch. Twenty four respectful anglers braved the persistant driving rain during the event and despite the conditions some good bream weights were recorded. Bewdley’s Steve Maher (Maher Floats) continued his recent good form at the lake, to lead the way with a brilliant 44-12-0 top catch consisting of twenty three bream caught on the groundbait feeder with a variety of baits including corn, pellet and small boilies. Sensas-backed Chris Hill and Solihull’s Mark Bisset both chose a similar attack to the winner for the bream and Chris finished in second place with 29-9-0 from peg 29, ahead of Mark’s 26-0-0 at peg 69. Other double figure weights were returned and £120 was raised for the worthy cause.

Neil finds himself among the Newmillerdam roach and perch

Wakefield AC’s Newmillerdam fixture in Wakefield, West Yorkshire proved to be an excellent match in early autumn sunshine and light winds. Winner, Neil Stead pole-fished bronze maggots and casters at 12 metres off peg 17, targeting the roach and perch for an impressive 16-3-0. Runner-up Graham Marson found some bream on the feeder at ‘fancied’ peg 1, boosted by some roach and perch for second with 15-11-0, ahead of Gary Hampshire’s 13-0-0. Gary had a quiet first hour on the feeder before switching to pole tactics, he then caught roach and perch at intervals for the rest of the match.