Reports on angling matches from the week ending 13 August 2016. 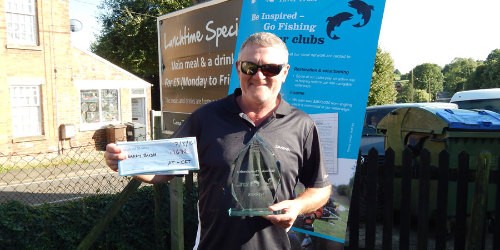 The forty eight finalists who fished Sunday’s Angling Trust & Canal & River Trust 2016 Final on Boddington Reservoir, nr. Byfield, Northamptonshire had to endure very blustery but mild conditions. Persistent strong winds blew down the reservoir and into the dam wall. The last peg to be drawn was end peg 2 by renowned angler and Fish ‘O’ Mania semi-finalist, Birkenhead rod Barry Bush who went on to prove victorious with an 80K 360g unassailable haul, consisting of twenty four carp. Barry initially caught slowly, banking six carp in the first hour and a half with the odd lump following on but sport improved in the latter stages and he netted another ten carp in the last hour, to win by a county mile. Flouro wafters fished on the bomb at 30 metres over a bed of constantly fed 10mm pellets had done the job for Barry and he pocketed a well-deserved £1,672 for his achievement. Towcester’s Paul Keal then headed a cluster of weights to finish in the runner-up position, having fished wafters and the Method feeder at distance to bag thirteen carp to 13lb for 47K 300g from peg 99, to pick a cheque for £1,254. Andrew ‘Snowy’ Ashington (Ringer’s Baits) secured third with 42K 980g on the other end peg 103, where he fished both the bomb and Method feeder, bagging a dozen carp to 12lb, just nudging Steve Ringer (Daiwa) into fourth with 42K 840g at peg 87. Paul Walker made fourth with 42K 680g, pipping Paul Knapman into sixth on 42K 160g.

Twenty one competitors set up around Calf Heath Reservoir in Calf Heath, nr. Gailey, Staffordshire for Saturday’s Blackfords Progressive Monthly Open where the Point produced the top three weights on Method feeder tactics with various baits. The top five framers all banked bream to 3lb. Hednesford-based Dave Shaw (Ian’s Tackle) returned a satisfying 35-5-0 at peg 56, edging Chris Brown (JCB) into second with 34-13-0 from next peg 55. Bob Harris (Blackfords) brought 33-6-0 to the scales on neighbouring peg 54. Nev Bailey (Ian’s Tackle) made fourth with a level 26-0-0 from peg 50, leaving Sensas-backed Kevin Tipton in fifth with 23-5-0 at peg 47.

Lady’s day for Wendy at Patshull Park in Pattingham

The first open match of this year’s season on the Great Lake at Patshull Park in Pattingham, Staffordshire saw experienced angler Wendy Locker of Chester Tackle Locker clinch the win by just five ounces when she poled caster at 9 metres off Hotel Bank peg 33, to record an excellent 25-6-0 net of mainly roach. Little Dawley’s Paul Bucknell secured second, fishing the conventional feeder with worm over groundbait for 25-1-0 of bream to 3lb from Shallows peg 7, ahead of Les Thompson (Matrix) who poled caster and worm on Shallows peg 19 to scale 22-14-0 of roach and perch. Fourth placed Telford rod John O’Sullivan had a comparable quarry with the odd skimmer for 19-11-0 at Shallows peg 22, leaving Kevin Tipton (Sensas) in fifth with 18-14-0 of skimmers to 12oz, gathered on the conventional feeder with worm on Shallows peg 6.

Unfortunately, due to clashing with other events including the National Championships 2016 practise match on the Tidal Trent at North Clifton and Laughterton, Lincolnshire there was a low turnout of just twenty four anglers at Sunday’s round four of the Sensas Soar Masters. Low and clear river conditions didn’t bode well with bright sunshine overhead and a strong, squally wind throughout the day. Winner Mark Eustace (Bennett’s Bait & Tackle) chose one approach and stuck to it, he fished a groundbait feeder laced with casters fishing over to the far side at peg 78. Alternating worm and maggot on the hook, Mark caught a several skimmers to 12oz at intervals to scale 8-12-0 to secure his place in the 18th September final. Runner-up on peg 83 was Dave Smith (Preston Innovations Black Horse) with 8-1-0, consisting of over 200 small roach and perch, gathered on the long pole with pinkie over groundbait. The third spot went to Dave Petch (Quorn AS) who deployed the long pole with pinkie and also worm in a groundbait feeder with worm on the hook for a 6-9-0 mixed bag of little roach, perch and skimmers. The other qualifiers are Tony Marshall, Dave Mawby and Mark Derry.

Saturday’s 36-peg Bridgnorth AS Open on the Linley Bank stretch of the River Severn in Bridgnorth, Shropshire was fished in baking hot conditions but although the river was low and clear lots of good-sized barbel were caught and most sections fished well. Wolverhampton’s Adrian Griffin had a great day’s sport, banking eleven barbel to 6lb for 55-8-0, taken on the pellet feeder, fished to the far bank off peg 63, above the old fallen ash. Wayne Rolston (Bridgnorth AS) was hot on his heels with another cracking weight of 53-6-0, comprising of ten barbel also caught on the pellet feeder, fished towards the sunken tree on peg 97, at the bottom of the channel, Bridgnorth AS secretary, Phil Hancox came third with 39-12-0, made-up of seven barbel and one chub, some caught on the pellet feeder and some on legered meat at peg 65, below the fallen ash. Chris Hyde (Willenhall) and Dave George (Bridgnorth AS) followed with 39-2-0 and 37-8-0 respectively.

Tony shone in the sunshine on the Severn at Bewdley

Saturday’s latest Kidderminster & District AA Open on the River Severn in Bewdley, Shropshire was held in very hot and sunny conditions, nevertheless it still fished well and seven double figure weights were returned. Tony Avery (Sensas Portway) eased to victory on peg 26 with four barbel, snared on the pellet feeder, backed-up by silvers for 25-1-0. Next came Brian Jones (Steven’s Tackle) with 16-11-0 of barbel and chub, captured on legered meat also the stick float and waggler with maggot on peg 73, ahead of Steve Rowen (KDAA) who banked 15-10-0 of barbel on the pellet feeder at neighbouring peg 72. Fourth place went to Steve’s teammate Dave Foxall who had 14-12-0 of dace and perch on waggler and whip tactics, off peg 4.

Bream dream for Nigel on the Brum Faz at Minworth

Sunday’s round three of the Dams & Lock Teams of Four Summer League saw twenty one teams line the towpath of the Birmingham & Fazeley Canal in Minworth, Birmingham. Penkridge-based heating engineer Nigel Clayton (Browning Lifestyle Blue) turned up the heat in the sunshine to take the individual honours at peg 28, on the straight cables with fifteen bream, caught on poled caster for a superb 32-14-8. Merv Rogers (Sensas Black Country Gold) did exactly the same for another fifteen slabs for a rewarding 28-4-0 from peg K7, on the Kingsley cables, leaving Maver Midlands-backed Steve Broome, guesting for Sensas Dams & Lock Blue in this competition, in third with 22-14-0 consisting of a dozen caster-tempted bream at peg 19 on the straight. Sensas MAS Black teamsters Tommy Boyce and Jamie Tarplee followed with 18-0-0 and 16-9-0 respectively, leaving Ron Scales (Measham Youth) in sixth with 16-7-12. Sensas Strike Gold took the team prize on the day with 24 points and Sensas Dams & Lock Blue have furthered their league lead to 67 points, from Shakespeare Superteam/Bait-Tech’s 97.

Redfins win for Andy on the Calder & Hebble Canal

Warm and sunny conditions met the anglers at Saturday’s Thornhill AC Open on the Calder & Hebble Canal in Dewsbury, West Yorkshire. The water level was low however it didn’t stop the roach from feeding and Andy Turner (Slaithwaite AA) topped the match with 6-11-0 of roach to 8oz, caught on pole-fished pinkie, caster and hemp presented at 10 and 14 metres across to a tree, off peg 57. Teammate Martin Blagborough came second on peg 67, where he chose the same bait attack, fishing at 12 metres to return 5-11-0 of all redfins, leaving Luke Wrozsek (Dino Floats) in third with 5-5-0. Three weights of over 4lb followed.

The High Onn Boats Section of the Shropshire Union Canal in Church Eaton, Staffordshire saw action during Sunday’s Stafford Izaak Walton Open and Wolverhampton AA VDE’s Neil Turner rose to the fore on peg 12 where he poled caster, netting predominantly quality roach to 12oz plus a few perch to 8oz for 9-10-0. Four Ashes AC anglers followed with Dave Richards coming second with 9-3-0 comprising of a 1½lb eel, around 5lb of caster-caught roach to 6oz and prime perch between 12oz and 1lb plus 80 squatt-fish from peg 6, ahead of Walsall rod Steve Cope who pole-fished pinkie and squatt off peg 8 to record 8-7-0 of all roach to 6oz.

Dave engineers a win on the Shroppy at Norbury

Wolverhampton-based air conditioning engineer Dave McCall (Shakespeare Superteam/Bait-Tech) blew away the rest of the 24-strong field at Saturday’s Stoke City DAA Open held on the Barns Bridge Section of the Shropshire Union Canal at Norbury Junction in Staffordshire. Drawn on peg 141, Dave poled caster and maggot, catching bream to 2lb alongside skimmers and roach for a 16-9-5 top weight. Browning Lifestyle’s Paul Murrin came second on adjacent peg 142 with 10-3-0 of skimmers and roach, which fell to poled squatt and pinkie, leaving Simon Nickless (Sensas Black Country) in third, whose 10-0-6 from peg 135 included a 3lb 6oz eel, four perch to 1lb and 3lb of squatt-fish. 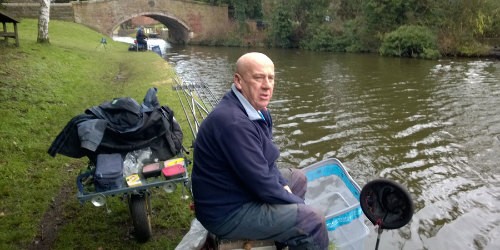 Dudley-based canal specialist Steve Broome (Maver Midlands) headed the field at Saturday’s 18-entry Sportsman AC Open on the Walsall Canal in Ocker Hill, Tipton, West Midlands. Pole-fishing caster and worm off peg 15, car mechanic Steve tipped 6-6-10 of bream and roach onto the scales. Sportsman AC’s Gary Atkins claimed second with all punch-roach for 4-4-7 from peg 19, ahead of Andy Curless (Preston Innovations Black Horse) who had 3-13-0 of squatt-redfins on peg 10.

Lee leads the way on the Dudley No. Canal in Merry Hill

In-form Gornal rod Lee Woodhouse notched up another victory on the Dudley No.1 Canal in Merry Hill, Dudley, West Midlands, this time on the Waterfront Section of the Woodside AA Waters. Pole-fishing squatt off peg 49, Lee weighed in 122 small roach, perch and gudgeon for 8-8-4. Pegged next to the road bridge, Shakespeare Superteam/Bait-Tech’s Richard Knowles followed with hemp and caster-tempted roach, skimmers and perch bolstered by squatt-fish to scale 8-1-5, leaving Dave Anderson (ZLT Angling Products) in third who returned 6-6-6 of pinkie-enticed roach, perch and skimmers from a peg in the turning bay.

Roy tops on the Staffs & Worcs Canal in Penkridge

Bridgtown Social AC anglers filled the frame at Wednesday’s Wolverhampton Over 60’s Club Open staged on Sections 3 & 4 of the Staffs & Worcs Canal in Penkridge, Staffordshire which is the venue for the Angling Trust & Canal & River Trust Canal Pairs Championships 2016 Final on Saturday 29th October. Trouncing his club mates on peg 15, Roy Grosvenor netted a 2lb bream, a trio of big skimmers plus roach to 8oz, all tempted on poled caster for a clear win with 12-3-8. Dave Smith followed on peg 8 with five chub around the 1lb mark and a few perch, to poled worm and caster for 7-14-0, ahead of Dave Rayson who recorded a level 7-0-0 of pinkie, squatt and bread-enticed skimmers, roach and perch at peg 10.