Reports on angling matches from the week ending 1 October 2016. 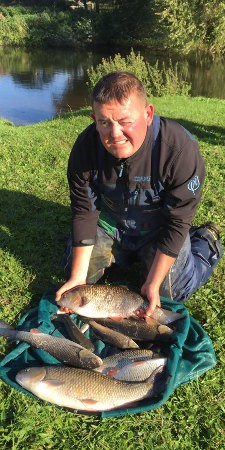 Jason tops the podium at the Drennan Coors Masters 2016 Final

Jason Owen (Coors AC) stunned the rest of the 52-strong field at Sunday’s Drennan Coors Masters 2016 Final on the River Trent at Burton-on-Trent in East Staffordshire. Drawn on the pipe bridge below Bailey’s weir, Jason put in a brilliant performance fishing the waggler with bronze maggot on the hook over heavy maggot feed, to net ten chub to 5lb plus the odd roach for a resounding triumph with a cracking 27-8-0, to claim the title and pocket £500 for his achievement. He also received a Drennan Acolyte compact 13ft. float rod. Runner-up was Nick West (Dynamite Matchman Supplies) who also had a great match on Ferrybridge peg 4; he began on the long pole with bronze maggot and was soon into his stride catching small roach, then later on switched to hemp to plunder quality roach for a level 17-0-0. Nick collected £300 and a Drennan Acolyte 14ft. float rod as his rewards. Third place went to three times Burton Festival winner, Pete Salt (Dynamite Mayfair) who alternated between the waggler and stick-float with bronze maggots on Municipal peg 23, catching roach, chub and perch for 13-8-0. He was duly awarded £200 and picked up a 13ft. Drennan Matchpro float rod for his accomplishment. Roger Smith (Burton Mutual) finished match fourth with 12-4-0, ahead of Ady Reynolds (Quorn AS) who scaled 12-2-0. The organisers would like to thank Drennan International for their continued support of the event. During the eight match series almost £3,000 has been raised for charity with the lion’s share going to Macmillan Nurses, a great effort from all of the anglers and everyone involved in the competition.

The Linley Bank stretch of the River Severn in Bridgnorth, Shropshire performed below par and was out-of-sorts during Saturday’s 60-peg Angling Trust Riverfest 2016 Qualifier and unfortunately hardly any barbel at all were caught. The top three in the match were all in A Zone and Ross-on-Wye rod Hadrian Whittle (Kamasan Starlets) topped the event and A Zone to qualify for the two day final on the River Wye in Herefordshire on the 19th and 20th November with 19-12-0, made up of a brace of barbel taken on the caster and hemp feeder with caster on the hook, bolstered by a trio of chub which fell to legered meat at ‘fancied’ peg 30, on the shingle at the top of the island. Burwell, Cambridgeshire visitor Liam Darler (Browning Hot Rods) was match second on peg 28, in the bay above the island, with another two barbel and one chub snared on the pellet feeder for 18-3-0, ahead of Dave Lloyd (Bridgnorth AS) who returned 16-5-0, consisting of three barbel caught on the pellet feeder with 6mm pellet on the hook at peg 46, on the mud flats. Dave unfortunately lost one which cost him the match. Geoff Maguire (KDAA) headed C Zone with 14-8-0 of dace caught on the whip with maggot, to book his final placing, at peg 192 on the golf course length. Local rod Richard Duke (Middle Severn Angling) qualified for the final with the largest weight from B Zone when he recorded 14-0-0 exact, consisting of a couple of barbel plus 4lb of silvers, taken on the caster feeder at Little Gadston peg 105.

Paul’s ‘King’ for the day on the Warks. River Avon in Barford

Sensas Portway’s Paul King eased to victory at Saturday’s Barford AA Open on the Warks. River Avon in Barford, Warwickshire. Drawn on peg 80, Paul banked five barbel to 11lb for an unassailable 41-0-0 exact. Second place was shared jointly by Colin Talbot (Match Box) and Matt Hamilton (Sensas WB Clarke) who both weighed in 25-10-0. Colin had chub, dace and perch off peg 68 and Matt netted barbel alongside chub and dace at next peg 67. Matt’s teammate Ian Winter came fourth with small barbel and dace for 16-14-0 from peg 71.

Kidderminster & District AA’s Geoff Maguire headed Wednesday’s KDAA Float Only Open on the River Severn in Bewdley, Worcestershire. Drawn on peg 72, Geoff banked two barbel and one chub plus roach, perch and dace caught on the whip for an admirable 28-13-0. Willow Creek’s Geoff Brierley came second with a fine 23-3-0 net of dace and roach, gathered on whip tactics at peg 105, ahead of Dave Foxall (KDAA) who used both the whip and waggler on peg 58 for third with 17-2-0 of dace and perch.

Geoff Brierley (Willow Creek) then went one better to win Saturday’s Kidderminster & District AA Open on the River Severn in Bewdley, Worcestershire by a clear margin of over 10lb when he scaled a rewarding 27-0-0 net of all chub, snared on the waggler at peg 50. Runner-up on peg 29 was Nigel Marchington (Mark’s Tackle) who had one pellet-tempted barbel plus dace on the waggler for 16-7-0, leaving Phil Baker (Willow Creek) in third when he returned 12-7-0 of small chub, dace and perch, again caught on the waggler at peg 32. 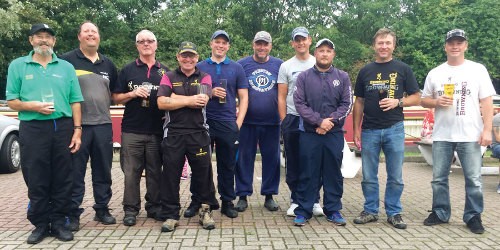 Three cold nights in a row certainly kyboshed any chances of the anticipated mass bream catches being returned at Saturday’s Angling Trust & Canal & River Trust Canal Pairs Championships 2016 Qualifier on the Grand Union Canal in Milton Keynes, Buckinghamshire. The event turned out to be a case of who could catch small silvers quickest on pinkie, squatt and red maggot. On the individual front Lubenham’s Norman Bradshaw topped a close cluster of weights with 7-6-8 from B Section, ahead of Alan Donnelly’s 7-5-0 in A Section. The next two weights also came from A Section and Dave Tebbutt put 7-4-0 onto the scales, pipping Steve Rose into fourth with 7-2-0. The qualifying pairs who will be going to the final on the Staffs & Worcs Canal in Penkridge, Staffordshire on the 29th of October are local father and son combo, Roger and David Tebbutt from Newport Pagnell who won the pairs’ prize on the day with 36 points. Also, Norman Bradshaw (Lubenham) & Martin Colver (Apethorpe) 35; Alan Donnelly (Nuneaton) & Andrew Curless (Tring) 33; Jjohn Brogden (Cottan) & Chris Gorrell (Preston) 29; Jason Evans (Harwood Park) & Mark Roberson (Bromsgrove) 27.

Mark copes well with the Shroppy chub and bream at Brewood

Sunday’s Four Ashes AC Autumn Spectacular Open was held on the prolific Port Lane section of the Shropshire Union Canal in Brewood, Staffordshire. Drawn on peg 21, four pegs through Chillington Hall Bridge, Browning Lifestyle’s Mark Capewell took the winner’s purse with an impressive 23-15-0 net, comprising of a trio of chub to 3lb, bream between 2½lb and 3lb, backed up by roach and skimmers, all gathered on pole-fished chopped worm and caster. Wednesfield’s Mel Wood, Four Ashes AC captain, followed on end peg 22, next to the winner with 21-6-0 of bream to 2½lb, one 2lb chub plus roach and skimmers, caught on poled squatt and pinkie, ahead of his teammate Lazy Hill’s Terry Blyde who had all caster-chub for 18-10-0 from peg 2.

Seasoned campaigner, Wednesfield-based octogenarian Bert Simmill (Bilston Angling Centre) made it two on the bounce when he topped Wednesday’s Wolverhampton Over 60’s Club Open for the second consecutive week. The match was held on The Boat PH Section 1 of the Staffs & Worcs Canal in Penkridge, Staffordshire and pole-fishing hemp off peg 12, Bert banked a plethora of roach, up to 8oz, for a 7-13-0 winning net. Bridgtown Social AC’s Roy Grosvenor was bridesmaid once more, this time with 6-8-0 of caster-tempted roach and perch off end peg 16. Penkridge-based Dave Smith also of Bridgtown Social AC came third with 6-7-5 of roach, gudgeon, perch and skimmers, attracted on pole-fished worm and caster at peg 2. 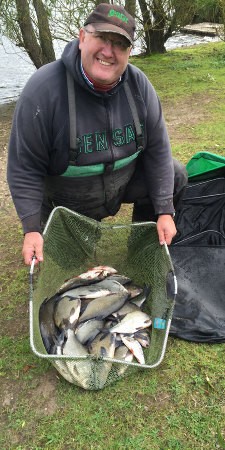 Bream dream for Kev at Kingswood Lake in Cannock

In-form Wednesfield rod Kevin Tipton (Sensas) notched up yet another success when he won Saturday’s Blackfords Progressive Open on Kingswood Lake in Cannock, Staffordshire by a country mile. The top three all had bream up to 3lb on the conventional feeder with caster and worm on the hook. Drawn on peg 47, Kev brought a hearty 31-8-0 to the scalesman. Blackfords’ own John Burns followed with 17-5-0 from peg 44, ahead of West Bromwich-based Dave Nicholls who returned 16-2-0 at peg 46.