This guest blog is brought to you by Tom Legge, freelance angling journalist and Angler’s Mail contributor since 1988.

Dennis Flack is a true angling giant, despite being widely known as the master of so-called ‘mini species’. No angler in history ever held more than two British freshwater fish records before Dennis racked up an incredible four in just a single year – 1998. Three of these records remain unbeaten to this day. 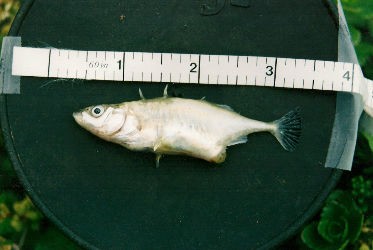 Earlier in that same year, after the British Record Fish Committee had scrapped the previous silver bream record of 4 lbs due to doubts about its parentage, Dennis also successfully claimed the vacant title with a 15 oz specimen from Grime Spring – a farm pond in his back garden. Incidentally, you do need a rod licence to fish in ponds in your own back garden. While his silver bream record has subsequently been raised several times to its current benchmark of 3 lbs 4 oz, only his bleak record has subsequently been challenged – and the claim promptly rejected.

A little more about that later. But first and foremost, any profile of Dennis Flack’s amazing angling life must begin with a larger silver species. Dace! 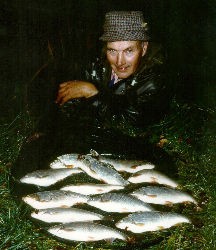 Aged 85 years young and still living with wife, Lilian, in their lifelong cottage home near Lakenheath on the Norfolk/Suffolk border, Dennis Flack’s days out with rod and reel on the Fens and Breckland banksides are alas rare nowadays. But back in 2008, when I first interviewed him about his dace exploits, Dennis was happy to outline how his quest to break the then-British record of 1 lb 4 oz 4 dr set by Jack Gasson in 1934 on his local river ended in ‘so near, so far’ style: "In the late 1980s I had my best dace fishing. Gasson’s record had stood for decades and I came within 2 dr of equalling it in 1989 with a wonderful fish of 1 lb 4 oz 2 dr," Dennis told me. "Two years earlier I caught ten dace over 1 lb in a day including a 1 lb 4 oz and two of 1 lb 3 oz 8 dr. I had another of 1 lb 4 oz the same year. It was amazing fishing, I am privileged to have experienced it. All my other records are beatable but I’m certain that day’s catch of dace will never be," said Dennis, whose tactics were light loose fed maggots with single or double maggot, trotted beneath a Drennan Crystal waggler. "Very few people know which stretch I was fishing, but it’s irrelevant really as nowhere on the river can produce dace of that calibre now or in the near future. It’s a shame, but what’s gone is gone."

Dennis readily admitted that his biggest dace came during the river season’s final fortnight – and likewise his bleak record from the River Lark almost a decade later. "All river fish are at their heaviest at the season’s back-end," he acknowledged.

A new millennium dawned and suddenly potential record-breaking dace were turning up on the River Wear, upstream of Sunderland, where in 2002 Simon Ashton raised the British Record bar to 1 lb 5 oz. 2 dr. Dennis had nothing but praise for Simon’s achievement: "I was very pleased for him. He’d been getting closer and closer to the record in the preceding years. It’s nice to see a river capable of producing big dace."

When asked about the prospects of the Little Ouse ever reclaiming the dace record, the usually optimistic Dennis delivered a somewhat gloomy prognosis. "To use a farming term, I believe the bloodstock of those dace was something special. People call big dace ‘pigeon chested’, but these had an unusual shape, being deep bodied all along their length, not just the chest. But the entire bloodstock was wiped out by a pig slurry pollution which entered the Blackbourn tributary and moved downstream, killing all before it," he revealed in the 2008 interview. "Seeing all the devastation was heartbreaking, and although the river was restocked and nature rights itself quickly, I’ve not seen or caught a big dace since," he added.

Matches and other catches

Like the vast majority of top anglers of his era, Dennis was no one-trick pony. Match fishing was a big part of his life during the 1960s, 1970s and early 1980s. "I won both the Little Ouse Championships and Lark Championships when they were 200-300 peggers. I represented Suffolk County 15 times in All Englands and Nationals. Another highlight was The People Newspaper’s final on the River Guden in Denmark," he confirmed. "In 1987 I was voted Eastern Daily Press angler of the year and finished third in the Angling Times Drennan Cup. In 1989 I was third in the Angler’s Mail Shimano Specimen Cup. Dace have never been a vogue species so I feel proud of those awards."

Specimens and other achievements 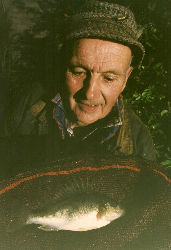 Dennis has also caught pike to 27 lbs, zander to 13 lbs and perch  to 4 lbs from his local Little Ouse, Lark and Cut-Off Channel – with multiple doubles of pike commonplace in the 1970s and 1980s! Another highlight was when he persuaded the Environment Agency’s forerunners, the National River Authority, to stock barbel into the Little Ouse, back in 1988.

"I fell in love with barbel when I match fished the River Severn around Hampton Loade. I’d been trying to get them stocked into the Little Ouse for 20 years as it seemed ideal habitat and finally they agreed. 200 went in at Santon Downham and another 100 at Brandon," confirmed Dennis.

Dennis once went close to breaking the ruffe record, the specimen in the picture falling a few drams short of the target.

Dennis recognises the fact that many anglers consider the capture and weighing of ‘mini species’ as a trifling matter when set alongside the quest for ever-larger carp, wels catfish and other chunks. "I’m sure that’s true, but I’ve always valued the record list as a means of recording history and setting targets, mainly through my dace fishing on the Little Ouse. I also owned scales capable of accurately weighing little fish, so my attitude was always why not?" was his response. I for one am firmly in Dennis’s camp. If a young angler cannot experience the joys of catching tiddlers before moving on to giants, then that’s an opportunity missed. I understand that modern day specimen carp anglers who introduce their sons and/or daughters directly to the bivvies, boilies and alarms ‘bait and wait on a managed lake’ scene are doing their best to pass on the love of our sport. But I feel they are missing out on the basics, namely tiddlers. Perhaps that’s why the number of anglers we have today isn’t what it was decades ago. 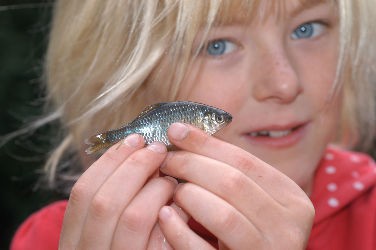 I’ve never set out to beat one of Dennis Flack’s British records, but through awareness of them it’s been fun to come close. In 2009, whilst fishing the River Lark at Prickwillow with my daughter Holly, I spotted some big bitterling in the margins and promptly extracted one which tipped the scales at 17 gr – just 4 gr shy of his record!

The following summer, during a coaching session at Head Fen Lakes near Ely, teenager Lucy Lamb whipped out a gigantic three-spined stickleback which I weighed at 7.1gr, again a fair way short of Dennis’ record.

August 2016 saw me catch a personal best dace of 13 oz from the Little Ouse at Thetford. Small beer compared to Dennis Flack’s late 1980s catches, but I’ve also heard of recent dace tipping 1 lb here, so hopefully his doomy forecast will prove unjustified. After all, there are three rivers forming the Little Ouse upstream of Thetford – the parent river plus the Thet and the Black Bourn. Only one of which suffered a major pollution, so that dace ‘bloodstock’ mentioned by Dennis surely remained in the other two and will reach fruition in the next few years? As for a barbel legacy, I still hear rumours of big lone barbel on the Little Ouse around Brandon Staunch, but I’ve never seen proof. So, regrettably, I’ll chalk that up as a rare heroic failure for Dennis.

Finally, in early January 2017, Norfolk angler David Selly caught, accurately weighed (with an independent witness) and photographed a bleak of 5 oz 8 dr from the River Lark, duly posting a record claim in the expectation of trumping Dennis Flack’s 19-year-old record. The BRFC’s response was swift and "likely to be a hybrid involving roach" declared BRFC secretary Nick Simmonds. Therefore, Dennis’s bleak record survived. I would love to see a picture of it just to put to rest any lingering doubts anyone, myself included, might have that Dennis’s record was 100% bleak. I wonder if there is anyone out there who has a photograph of the fish?