Welcome to the latest edition that includes a roundup of some of the things we've been working on over the winter, a report on storm damage and news of a consultation about Boat Safety Scheme examinations. The routine news summary, this weekend's stoppages and useful info can also be found.

Welcome to the latest edition of Boaters Update. As we approach the end of our winter stoppage programme the first article looks back at a number of the restoration and repair jobs that have been completed, what’s running behind schedule, and then our initial plans for next winter.

As you’ll read, some of the delays to this winter’s programme have been caused by recent storms and our second article gives an insight to the impact of the most recent, Storm Eunice. Finally, read about a consultation from the Boat Safety Scheme.

The regular roundup of news and useful information in the bits and bobs section can also be found below.

PS Our annual survey of boaters’ views is underway. Emails have been sent to around 10,000 boat licence holders so do please check your inbox for an email from Snap Surveys, canalrivertrust@online1.snapsurveys.com, because we’d love to hear your views.

Last November we embarked on a major, £multi-million, programme of maintenance to protect and preserve a wide range of waterway infrastructure. If you’ve recently been out for a cruise, or attended one of our open days, you might have seen some of our work. That said, once the site compounds are dismantled and drained canals refilled with water, not everything we’ve done will be visible from your stern deck so, in this article, we’ll give you a glimpse of the broad range of things we’ve been doing. 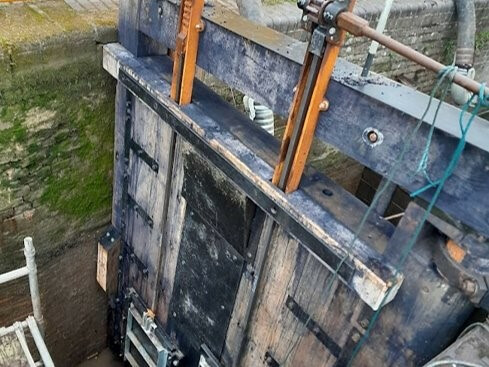 Lock gates are perhaps the most iconic piece of waterway architecture and, of course, vital to the network. This past winter we replaced 122 lock leaves at 73 locks. The total weight of the gates and their beams manufactured in our own workshops was 308,077kg – equivalent to more than four space shuttles. Or, to give a different sense of their combined scale, if all of the lock gate leaves were piled on top of each other end on end, they would be taller than the Empire State Building and Big Ben combined (over 490 metres)! 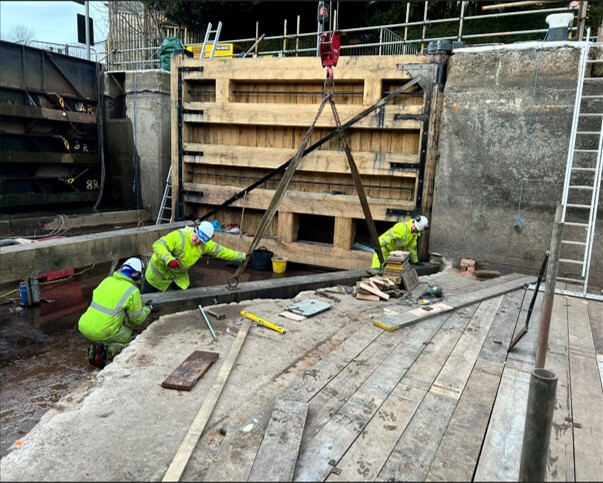 In replacing the gates we also removed nearly 180 tonnes of silt and rubbish and repaired and built over 700 square metres of brickwork.

While many locks on any given canal are usually roughly the same size, each is, in fact, dimensionally unique. This means that every single lock leaf is carefully planned with up to three architectural drawings produced for each one to gain necessary consents. 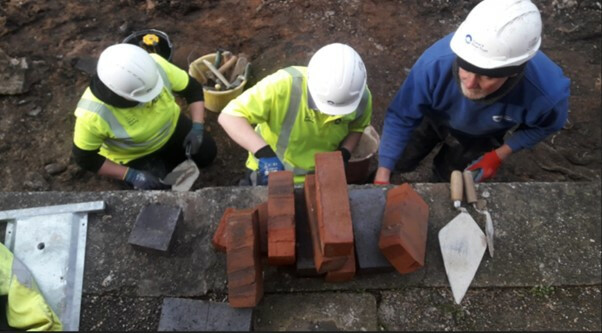 That said, and as a boater you’ll appreciate, locks can be wildly different in size. Two that we’ve worked on this past winter demonstrate the point. Top right is the single leaf Lock 36, Allen’s Lock, on the Oxford Canal which has had a new bottom gate installed. Above right is one half of the comparatively huge gates at Newark Town Lock on the River Trent. In the picture you’ll see that the team aren’t working on installing the new gates at the time the photo was taken. Instead they were putting 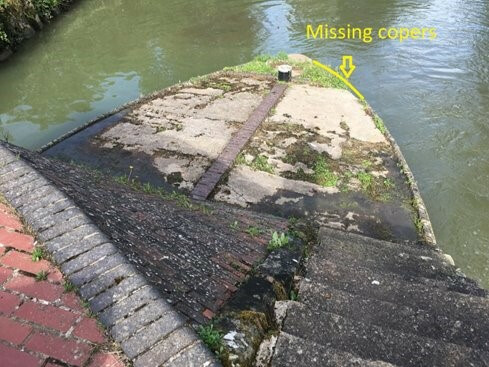 in new seals. This is something we do whenever we can – if we’re draining a lock ready for the installation of new gates then we try to do as many other jobs while the lock drained to minimise the amount of disruption to boaters.

A classic example of this is at the nearly 250-year-old Hillmorton Lock on the Oxford Canal.  Apprentices were taught the art of lime mortaring, above right, while the rest of the team 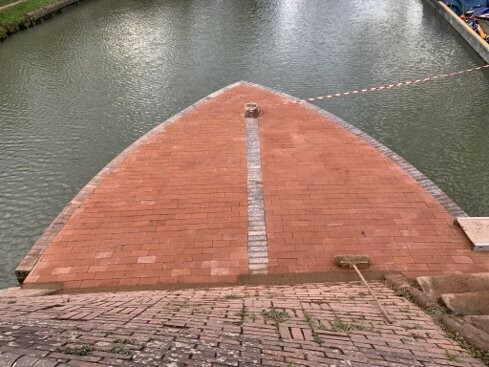 ploughed on with other major work such as replacing and repairing brickwork and coping stones. Transforming it from the photo above right to the photo right.

Elsewhere in the country apprentices have been completing maintenance that you probably wouldn’t notice from your boat. In the photo right, they were working on the weir refurbishment at Bratch Locks on the Staffordshire & Worcestershire Canal. As you’ll see, the weir is dry, which couldn’t be said for the team working on the weir at Lock 6 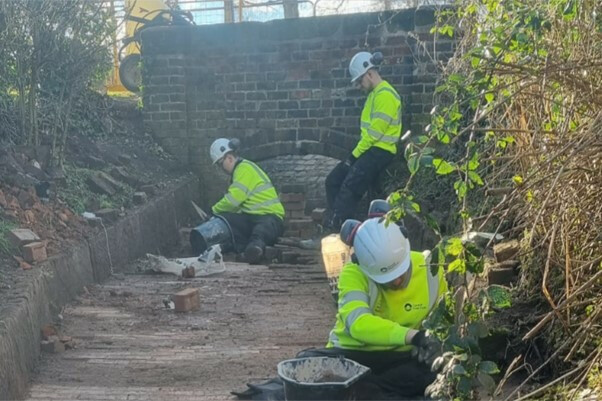 (Grindley Brook) on the Llangollen Canal. Repairs were needed to the weir’s walls but, due to contractual obligations with a water company, they had to be done while preserving a minimum flow of 300 gallons a minute through the weir (below right). 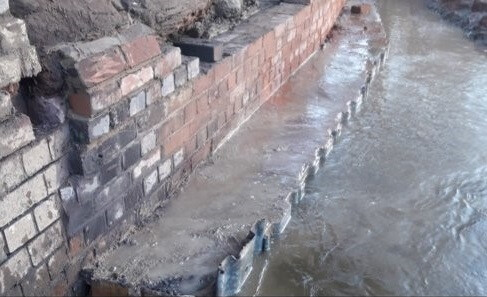 winter. Bank protection, such as in the photo on the right, below, on the Rufford Branch of the Leeds & Liverpool Canal, is typical of the work we’ve been carrying out to stabilise thousands of metres of canal bank.

The combined effect of a number of recent storms in quick succession (more on their damage below), and a two-year-long global pandemic have impacted us all in one way or another. 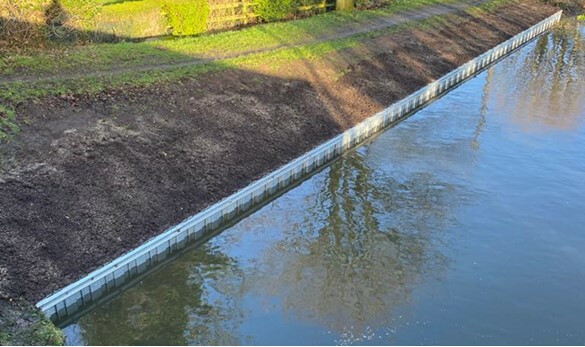 And while we’ve managed to get most of our planned work completed, some have overrun for a variety of reasons. We share the frustration of boaters and will continue to press ahead with the late-running projects to finish them as soon as possible; some within the next week and all except two finishing before Easter. In summary, the delayed projects, in the order that we’re expecting to complete them, are:

*Lock gate production delays - This year has been particularly challenging in lock gate production, with a combination of staffing issues, the covid pandemic and material supply delays all combining to cause interruptions in the delivery of lock gates. 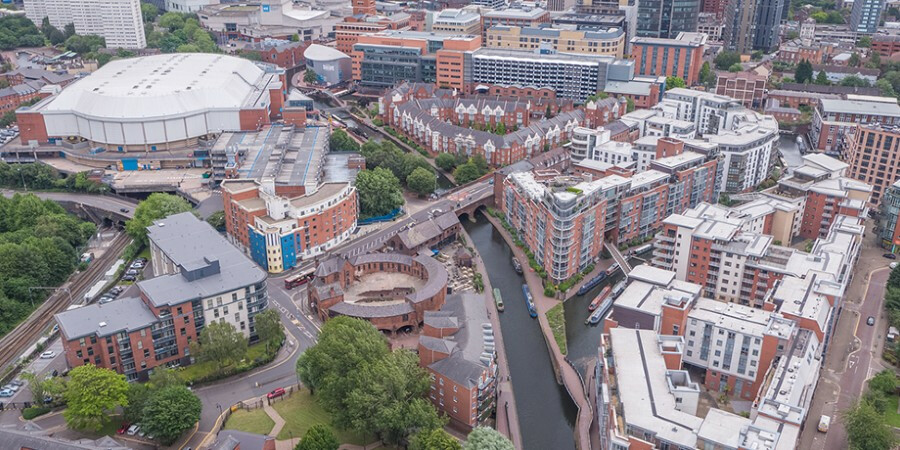 As a boater you’ll know that work doesn’t grind to a halt just because warmer weather has arrived. Our West Midlands region is a prime example. Ahead of Birmingham hosting the Commonwealth Games later this year, work will continue to get the region’s canals ready for the sporting spectacle. This will include increased visitor moorings and towpath improvements which, as with all our planned works and cruising-associated information, will be posted on our stoppage notice system as soon as it's confirmed.

More broadly, plans are well underway for next winter’s stoppage programme. While not yet finalised, or published on our website to get your feedback, our plans for winter 2022/23 in broad terms are:

The list above highlights the winter stoppage programme. As well as that we’re spending a further £60 million on major projects to reservoirs and high risk assets – much of which is away from the line of the canal network but equally important to protect and preserve the waterways for years to come.

As the first article describes, we’ve managed to get through a lot of work over the winter in spite of multiple storms and a global pandemic. The most recent of the storms, Eunice, resulted in reports of over 450 trees down on our land and waters, of which two thirds were cleared in the first week which, together with emergency pumping, will cause around £300k of additional spend. 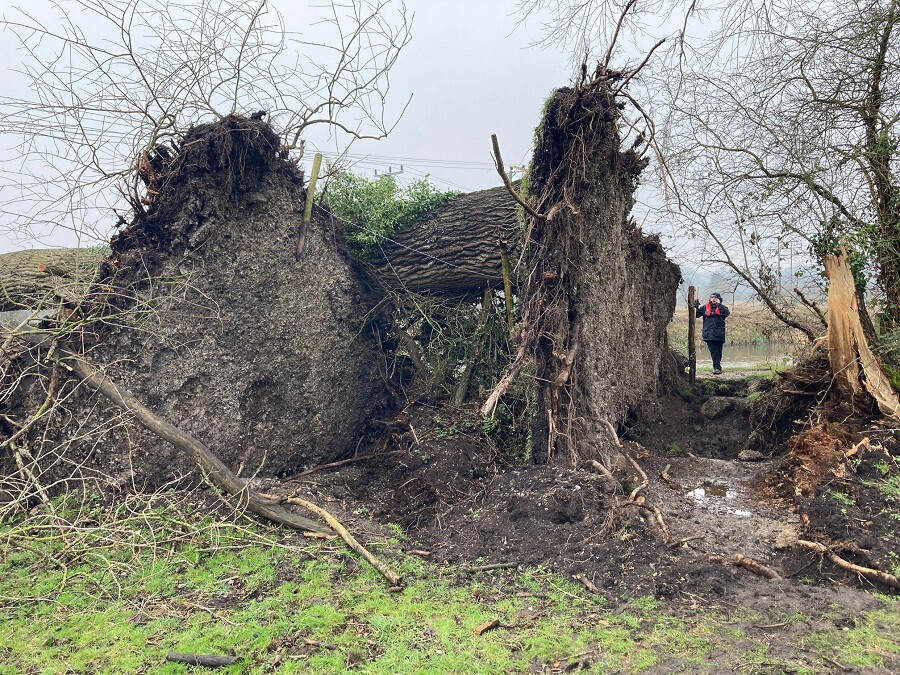 Julie Sharman, our chief operating officer, said: “Storm Eunice caused havoc, blowing down hundreds of trees that blocked navigation and collided with our 200-year-old infrastructure as well as sadly damaging several boats. Fortunately, we’ve not had reports of anyone injured, but the historic canal network has taken a battering in many places.

"In London, the storm seriously damaged our impounding station in Docklands which houses the heavy-duty pumps that keep West India Docks topped up with water: not ideal given we were hosting a visit from a warship from the Dutch Fleet along with many local vessels. In some parts of the country excessive rain caused floodwater to spill over the dams and into our stoppage sites, hampering our works.

“Over the weekend of heavy winds and rain our teams and contractors were out on the canals and towpaths battling the damage done by the storm, and many colleagues who were not on call came in to help tackle the response and get the navigations up and running.”

A public consultation has been launched by the Boat Safety Scheme (BSS) on proposals for a clarified and improved set of BSS Examination Checking Procedures (ECP).

The consultation runs until Tuesday 31 May and is available on its website. 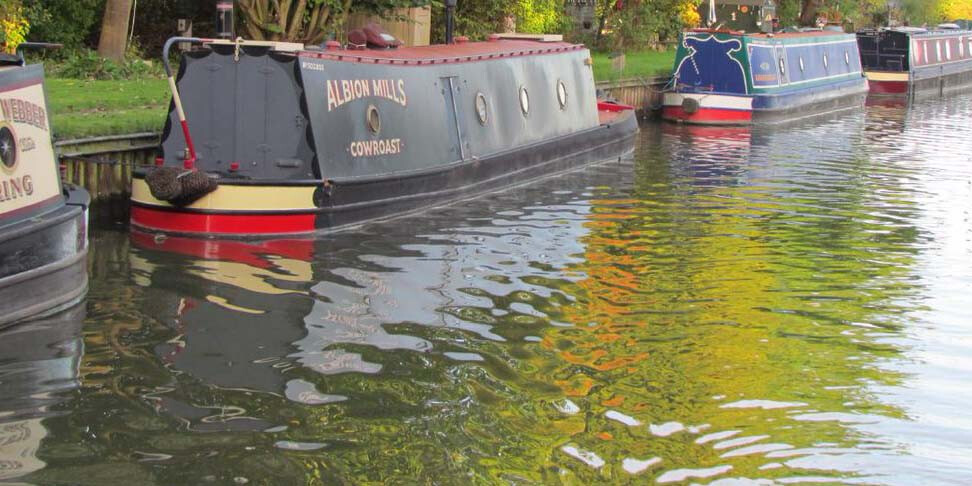 The revisions to the BSS ECP are the product of many months of work by the BSS stakeholder committees and the revisions are commended by the BSS Management Committee. They apply to checks used in the examination of privately owned and managed boats in private use as well boats subject to the 2017 Hire Boat Requirements.

The main focus of this consultation is the introduction of two mandatory BSS Requirements by way of amendments to two existing BSS Checks.

The two increased BSS Requirements are:

It is also proposed to introduce 20 relaxations by reducing some requirements or allowing additional compliance options – all of which are detailed in the consultation.

The Scheme considers that the improvements are both necessary and proportionate means of risk control and will have a positive impact on the level of consistency of the application of BSS Checks by existing BSS Examiners. It also believes that it will significantly improve the uptake of knowledge and understanding of trainees going through the New Examiner entry training programme.

Comments on the amendments are welcome from boat owners, the marine trade and all BSS stakeholders. A summary of the views expressed and the BSS response will be published in Summer on the BSS website.

The consultation runs until Tuesday 31 May and is available on its website. The final changes will be promoted by the BSS over the summer.

If you have trouble with the consultation form or a related query, please email the BSS at bss.enquiries@boatsafetyscheme.org

As someone who’s out on, or by, the water more often than most, you’ll know that there are times when we need to fix things that unexpectedly break. So, below, you’ll find a list of what may affect you if you’re planning to get out on your boat this weekend:

When restrictions to navigation happen, we get them up on to our website as soon as we can – always best to have a scan before you set off. You can set up your smartphone to automatically alert you if a notice is issued for a canal or river that you’re interested in. Check out this guide to setting it up.

If you have any questions about a specific closure, or spot an error in our system, please get in touch.