Here you'll find an update on the repairs to the flood damaged waterways in the Calder Valley, some rather 'unique' enquiries and calls that our customer service team have taken and news of how to get inspiration for your boating garden...

Welcome to another packed edition of Boaters’ Update. Here we look at the progress of the repairs to the waterways in the Calder Valley that were so badly damaged by the Boxing Day floods.

Also read on if you want to find out where and how you can get inspiration for gardening on your boat. And, as mentioned in the last edition, I enjoyed speaking to lots of boaters at Crick Boat Show a couple of weeks ago and the breadth of topics discussed planted a seed. I wondered just what type of things my customer service colleagues get asked – so I’ve taken a light-hearted look at some of the more, let’s say, unexpected, enquiries and requests.

If there’s something you like to see in a future edition, or a regular feature you think will be useful, then please drop me a line. In the meantime, click on the links below to jump to the article of your choice:

Usually in the following section I pick out a few events that are happening over the next fortnight. In a break from the norm though, because there’s so much going on, I’ve split it out into two chunks:

This weekend (18 &19 Jun) – In London you can get jump off the train at Paddington and indulge in some retail therapy at the floating market where’ll you find everything from vinyl records to vintage china. While you’re there you could also have tea and cake, and get a personalised poem, at the Origami Poetry Café. Don’t forget that it’s also Father’s Day on Sunday so you could treat him (and/or yourself!) to breakfast and a trip into Britain’s longest, highest and deepest tunnel at Standedge. Meanwhile, on the Trent & Mersey, you can enjoy music, dance, food, beer and boats at the Middlewich Folk & Boat Festival. Leicestershire's fantastic family weekend is back as well – now in its sixth year, the Foxton Locks Festival is set to be the biggest yet. Less than an hour away you’ll find Stoke Bruerne's 11th family festival. There are a couple of Leeds & Liverpool bicentenary events too; Burscough is hosting a weekend of festivities including historic boats, music and food and you can gongoozle up to 30 canal and river boats as they take part in a wonderful flotilla.

Next weekend (25 & 26 Jun) – Back for its ninth year, Leeds' biggest waterside festival will be bursting with arts, music, boating and entertainment for the whole family. If poetry is your thing but you couldn’t make it to the Origami Poetry Café last weekend then why not catch Canal Laureate, Luke Kennard, at the Historic narrowboat rally and festival in Braunston? And finally, by the Kennet & Avon in Newbury, you’ll find fresh, handmade and local items on offer at the Newbury Artisan Market.

Of course, there are plenty of other activities and volunteering opportunities around the network so please visit the events section of the website to find the perfect one for you.

Shortly before writing this edition of Boaters’ Update I posted a link on the Facebook Boating page. It was to a stoppage notice announcing that we’ve temporarily stopped navigation on the River Soar due to heavy rainfall and resulting rise in water levels. I mention this for two reasons. Firstly, you’d hope that, at this time of year, lots of rain would be a distant winter memory. Alas, it’s not.

Secondly, there is a silver lining, albeit more Ratner than Tiffany. It serves as a reminder that our wonderful network of canals and rivers can be prone to the vagaries of the weather. 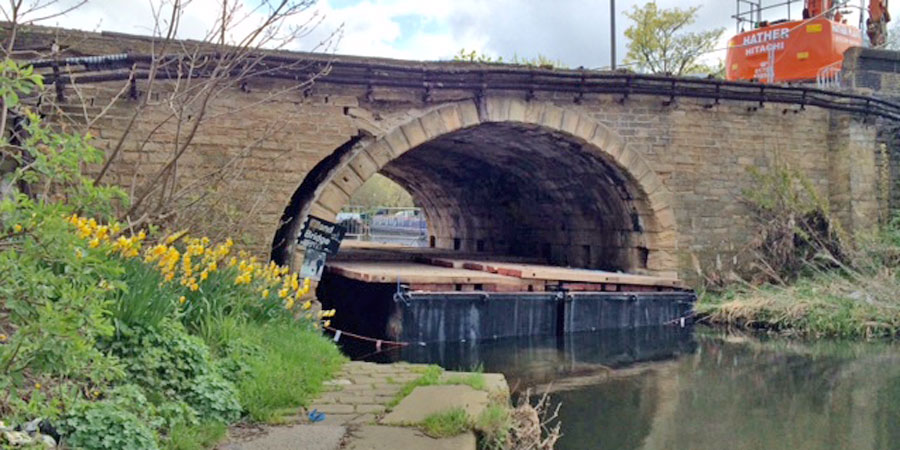 Those in and around the Calder Valley won’t need this reminder though as we’re still dealing with the aftermath of the Boxing Day floods. But, if you regularly cruise the area or are planning to visit, we’re pleased to report that there has been real progress recently with some of the remaining larger, more challenging engineering projects.

The good news is that a further section of the Rochdale Canal reopened to boats ahead of the recent Bank Holiday weekend. The canal is now available for use from Hebden Bridge to the winding point at Bridge 24 just above Lock 14 near Todmorden.

The next section of waterway to reopen will be the Calder & Hebble Navigation at Elland and Crowther bridges where work is underway to open the channel allowing people to boat east from the Rochdale Canal onto the rest of the network.

Both bridges were so badly damaged by the force of the floodwaters that they had to be carefully dismantled and then completely rebuilt. It’s a delicate job and we’re removing as many of the interesting features as possible so that they can be reused in the new bridges.

It’s taken slightly longer than anticipated to install the temporary dams at Crowther Bridge which has pushed our programme back by a day or so. We’re now aiming to reopen the canal to boats by 4 July although are working hard to make up the time and reopen at the end of June as originally planned – we’ll provide an update nearer the time.

One of the areas worst affected was around Todmorden on the Rochdale Canal. Here a section of canal wall was washed out causing the canal to breach. Works have recently started to repair the breach, rebuild 250 metres of collapsed wash wall and carry out repairs to Woodhouse Weir. It’ll cost around £700,000 and is expected to be completed in August.

Nearby, a landslip also caused the surface of a slope to slide down on and into part of the canal, blocking the way with earth, trees and debris and damaging the canal.

Since then we’ve been liaising with the resident who owns the slope, with a view to reopening the canal as quickly as possible. While discussions continue regarding insurance, one of the landowners has, in the meantime, agreed to grant permission for us to access the slope. This means that we can help with the important job of assessing whether the damage caused has resulted in any further movement of the land.

These investigations have started and as soon as we know how stable the slope above the canal is then remedial work and clean-up plans will be started. We’d like to thank everybody in the area for their patience and would ask them to please bear with us a little longer given the precarious nature of the situation. 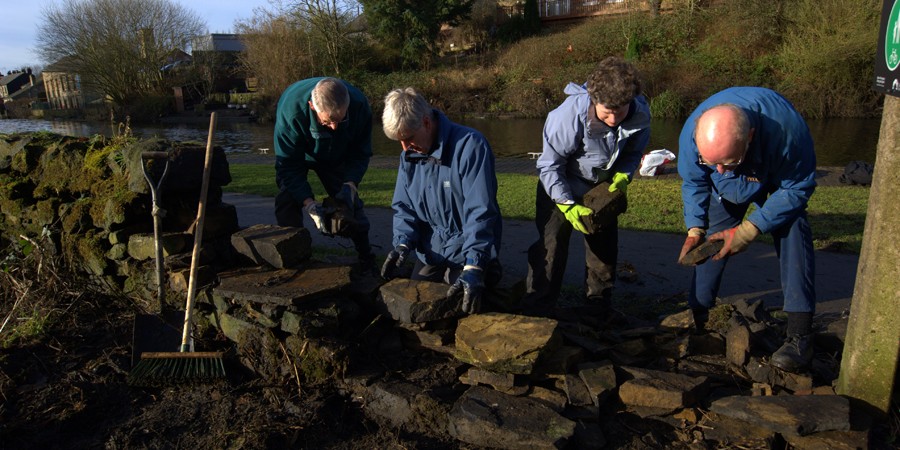 Elsewhere, works have been taking place to dredge both the Rochdale Canal and the Calder & Hebble Navigation, regrout Lock 2 on the Rochdale Canal, repair a number of culverts and carry out temporary repairs at Stainton Aqueduct on the Lancaster Canal.

Our appeal following the Boxing Day floods raised around £142,000 which was made up of individual donations, support from the players of the People’s Postcode Lottery and match-funding from Government.  While a modest contribution to our overall costs, this was hugely significant to us and represented support which would not have been available to our public sector predecessor, British Waterways.

Likewise we were able to mobilise tremendous volunteer support from local communities for the clean-up programme, which provided further demonstration of the importance that local people and boaters place on their waterways and the wider public support they generate”

Yup. The above are things our customer service team have been called about – thankfully they were three separate calls.

As mentioned in the intro, I was asked about a lot of things at Crick; types of licence, what happens to the stuff we dredge out of canals, will we be taking over the Environment Agency’s navigations and, perhaps the most unusual, was ‘why are you promoting citrus fruits?’ – in all fairness the enquirer was having a polite chuckle at our vibrant T-shirts.

Experts suggest that body language is responsible for 55% of communication. So while it was easy for me to tell, by the twinkle in her eye, that I was getting a gentle ribbing about our T-shirts, it’s not so easy for the customer service team when they answer a call. Here’s a range of topics they’ve been called about:

So there you have it. Quite a range of subjects – thank goodness the crocodiles didn’t spot the piglets (or the naturist for that matter!). As a boater, you’re probably asked about lots of things by passers-by – let me know over on our Facebook page what’s the most unusual…

Walk past most boats and you’ll see at least one pot full of plants perched somewhere. So, it shouldn’t come as a surprise to most that this year’s BBC Gardener’s World Live will feature a Canal Boat Garden by award winning designer Paul Stone, celebrating the Midlands’ canal network. Together with ABC Boat Hire we'll be exhibiting at the event, which is underway at the Birmingham NEC and runs until 19 Jun.

Mike Grimes, head of boating, explains: “We are delighted to be working with BBC Gardener’s World Live to help create a fantastic Canal Boat Garden feature for the event. 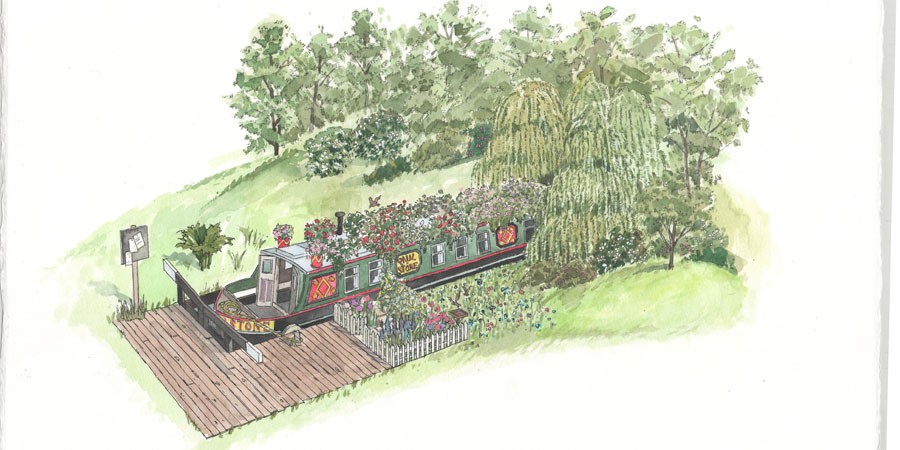 “The Canal Boat Garden will include a lock side scene complete with a full size narrow boat loaned by ABC Boat Hire as well as some old lock gates from the Staffordshire & Worcestershire Canal.”

Surrounded by planting typical of the ecosystems found alongside canals, the Canal Boat Garden display will also include a Lock Keeper’s cultivated garden and a 'moving roof garden' on the narrow boat itself, to give inspiration to those wanting to grow flowers and edibles in tight space.

The Canal Boat Garden also has a focus on invasive plant species, which costs us thousands of pounds a year to clear and, as you’ll know, can be a real frustration for boaters and damaging to native wildlife.

Paul Stone is a veteran garden designer and Gold Medal winner having exhibited at RHS Chelsea Flower Show amongst many others. Veolia are supporting the Canal Boat Garden by donating Pro-Grow products.

Mike continues: “We look forward to welcoming visitors to our stand at the event where we will be offering information about boating and visiting the canals, our Great Nature Watch, becoming a Friend of the Trust and invasive plants species threatening our waterways.

“We will also be offering visitors the opportunity to enter our special show competition to win a £500 canal boat holiday with Drifters Waterway Holidays.”

The Show is open 9am till 6pm daily, 16-19 June 2016. If you’re a foodie as well then you’ll be pleased to hear that tickets include free entry to the BBC Good Food Show!

While we work hard to protect the 200+ year old network of canals and rivers and keep them in tip-top condition, it’s not always possible – as shown by this edition’s first article. The list below is what we already know will affect cruising over the coming weekend. This list highlights those instances where, for one reason or another, cruising won’t be possible.