Welcome to the latest edition where you can read about what we've been working on for boaters, how we care for our historic waterway buildings, how boating is booming, Crick Boat Show and, as usual, your guide to the latest news and this weekend's stoppages (and more besides!).

Welcome to the latest edition. While the wall-to-wall blue skies of early summer seem to be on their own August holiday, I’m pleased to report below that this hasn’t stopped many of you from making this a bumper boating season.

Also in this edition, find out what we’ve been working on for boaters in the North West and Yorkshire & North East, as well as an update on work heritage buildings and structures.

And don’t forget to read the last, but not least, ‘Bits & Bobs’ which has important information on Crick Boat Show, mooring on bends and more besides (no pun intended!).

As always, a round-up of news and stoppages can also be found below.

Grafting for boaters in the North West

Even if you haven’t been boating in the North West, for many, one of its diverse range of navigations is likely to be on your bucket list.

Being ever-popular waterways means boaters are always in touch about one thing or another ahead of a visit.  Recently, one of the top things you’ve been asking about is booking passages and facilities; whether booking a journey on the Ribble Link, which connects the once isolated Lancaster Canal to the rest of the network, to staying in the iconic Salthouse Dock in Liverpool (via the bookable Liverpool Canal Link) or passing through the “Cathedral of the Canals” itself, the Anderton Boat Lift! There are other bookable things in the North West such as booking passage on to waterways managed by other organisations:

Another common reason for getting in touch has been to ask about the progress of some of our maintenance and repair works. 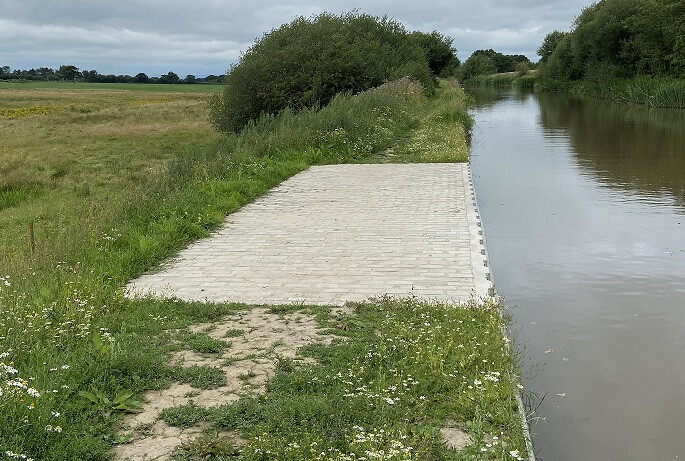 Although it seems longer, it was less than six months ago when Storm Christoph hit and, aside from the wider chaos caused, damaged parts of the North West’s waterway network. One such impact was a, now repaired, breach between Lock 10, Wharton's Lock, and Lock 11 on the Shropshire Union Canal. Above and right.

Sadly, the damage wasn’t restricted to just the Shroppie. There was a 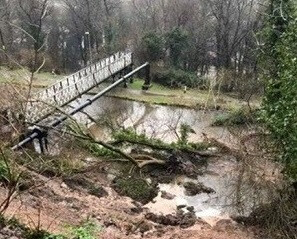 significant slip of material, right and below, into the Trent & Mersey from third party owned land resulting in the navigation and towpath, between Bridge 200, Soot Hill and Bridge 201, being closed. There’s still work to be done on the embankment but we’ve endeavoured to get the navigation open and safe for boaters. A big thank you goes to colleagues and Trust volunteers as repairing both of these examples, and the countless other impacts, such as multiple fallen trees and blocked culverts, during a period highly impacted by coronavirus. 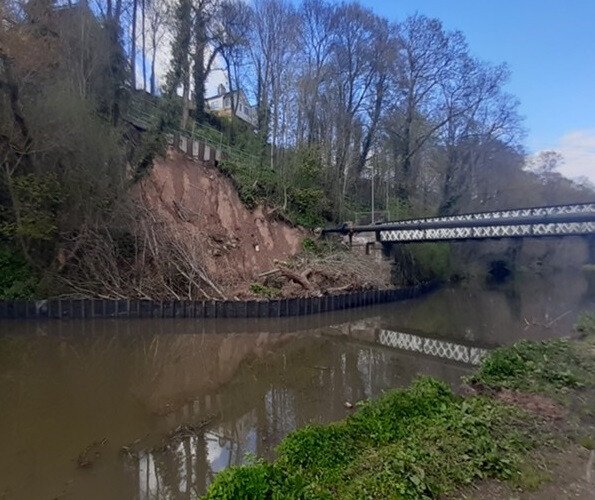 One immense, multi-million, project in the North West that also deserves a mention – because we’re diligently working to get the right solution that’ll help protect boating in the region for generations to come – is Toddbrook Reservoir which feeds the Peak Forest and Macclesfield canals.

You may remember that the dam auxiliary spillway was damaged after intense rainfall (which meant, as a safety precaution, over one billion litres of water had to be pumped out). Since then we’ve done a huge amount of work and, after public consultation, a few months ago we published our final plan. You can read more about this on our website or watch regional director Daniel Greenhalgh explain: 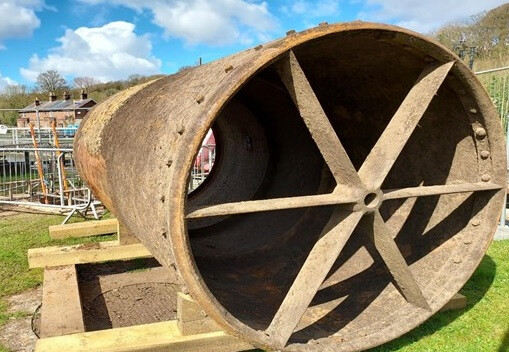 As with other regions around the country, it’s not just storm damage that we’ve been working on. A couple of examples show the range of work; we’ve been maintaining the huge paddle drum at Salterford Lock on the Weaver, along with extensive works at Lock 82, below right, on the Trent & Mersey – damaged, or missing, fenders on the tail gate were replaced and, due to the gate losing water and draining the pound, the head and tail gate were 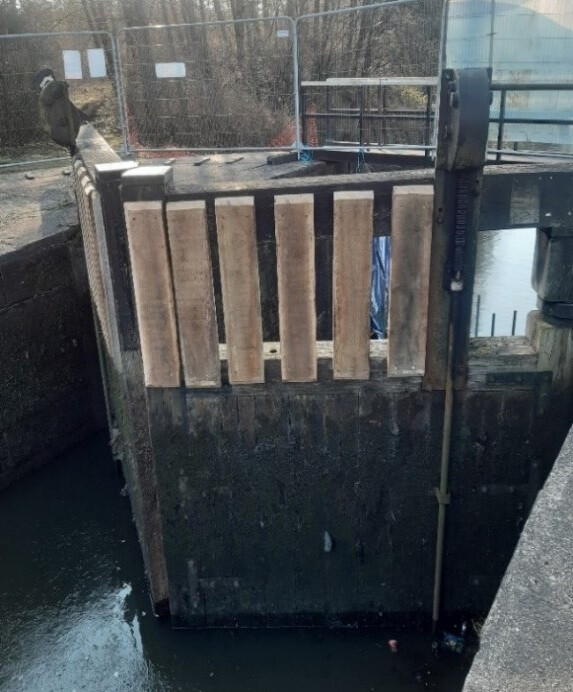 boarded out to conserve water and give the gate a longer life span. At the same time the head gate was mitered and the cill was refitted with additional capping pieces added for a greater seal.

Over time, work to look after the network sometimes results in external recognition. One such example, and the first in England, is at Royal Albert and Salthouse Docks which were recently awarded the prestigious Marina Blue Flag status. The docks qualified for the world-renowned Blue Flag Award in recognition of the highest standards of environmental information and management, safety and services.  The International Blue Flag, gratefully received by the team, below right, is a quality mark which means those visiting can be sure that the 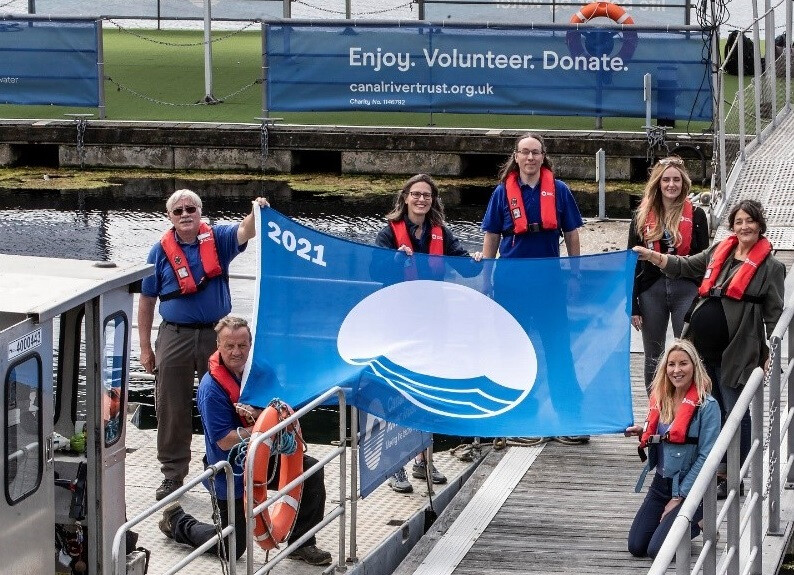 site is well managed, the water is clean, safe and meets the highest environmental standards.

If you are in the Liverpool area and have some free time between 20 and 22 August you might consider joining us for a packed weekend of activities including paddle sports, guided walks, family learning activities, boat trips (let someone else take the tiller for once!) and angling taster sessions. Find out more here.

Caring for our waterway heritage

As a boater you’ll appreciate more than most that the waterway network is home to many historical buildings. In fact, the Trust has 2,663 listed structures and buildings and 46 scheduled monuments to care for. Each and every one needs a bespoke care plan and through these we’ve been able, since 2005, to remove 122 buildings from the ‘Heritage at Risk’ register with only three remaining on the national list in 2019 (with plans, for example at Birmingham’s Roundhouse, to improve these). 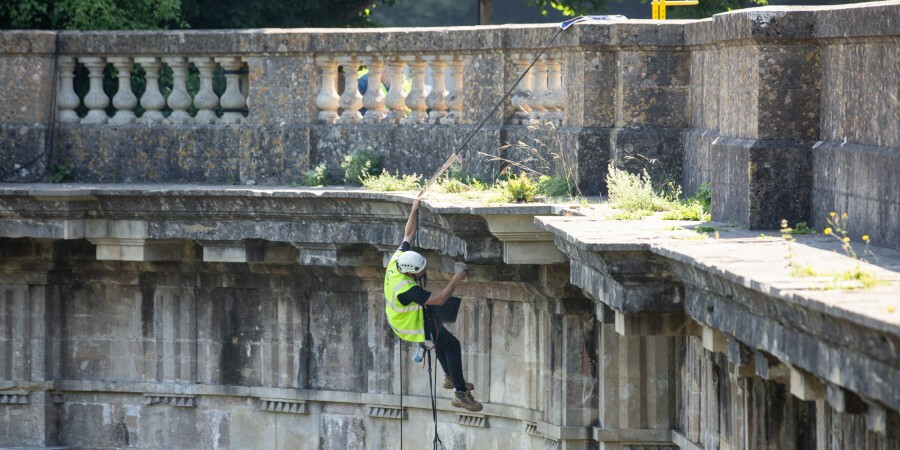 Some of the work we do on these precious structures is, let’s say, not run-of-the-mill stuff. Let’s take Dundas Aqueduct on the Kennet & Avon Canal for example. A specialist abseiling team is working with us to repair this historic Grade I Listed aqueduct.

Suspended on ropes 12m (40 feet) above the Avon Valley, the team of stone masonry conservators are carrying out specialist repairs to the Georgian Bath stone mouldings. Decades of exposure to the elements have left their mark, with some mouldings showing signs of cracking caused by freeze and thaw damage. Extensive restoration work was carried out in the early 2000s but the elements continue to take their toll on the fragile carved and decorative stonework of the classical detailing.

Morgan Cowles, our heritage and environment manager, explains: “For decades this elegant structure carried narrow boats bearing coal, timber, Bath stone and other goods between Reading and Bristol. Commenced in 1796 it was built to take the canal across the Avon Valley, thus allowing a nine-mile long stretch from Bath to Bradford on Avon be completed without locks.

“In 1954 it developed a leak and was taken out of use. In the 1960s and 70s it was completely drained, meaning people were able to walk along it. It was re-opened, complete with water, in 1984 and since then has taken on a new life, welcoming hundreds of leisure and lived-on boats to gently cruise along its 140m length.” 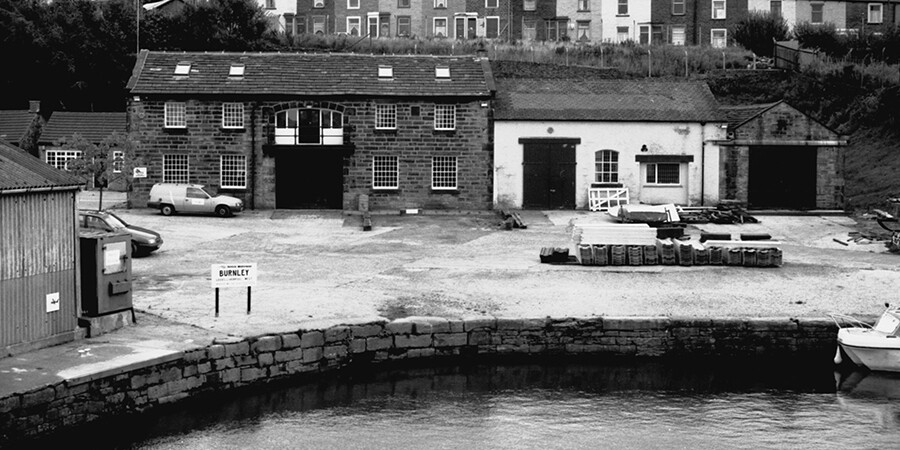 While you won’t be able to get up close to the finished work on Dundas Aqueduct, you will be able to at another upcoming Heritage Open Day. The recent £2.9 million restoration of Burnley’s historic Finsley Gate canal wharf, symbolic of our commitment to improve our huge range of heritage buildings, goes on show on Saturday 28 August. You will be able to drop into the new education room to try willow weaving craft workshops, see a professional blacksmith at work on the restored forge in the old stable block and learn more about the fascinating heritage on a guided tour led by the centre’s sawmill worker.

The main warehouse has now been converted into the Finsley Gate Restaurant and the Sawmill café bar, and both will be open, serving lunches and light refreshments.

A couple of editions ago I talked about how boating has made a massive resurgence since the last lockdown. So much so that it’s actually busier on the cut than the last ‘normal’ year in 2019. 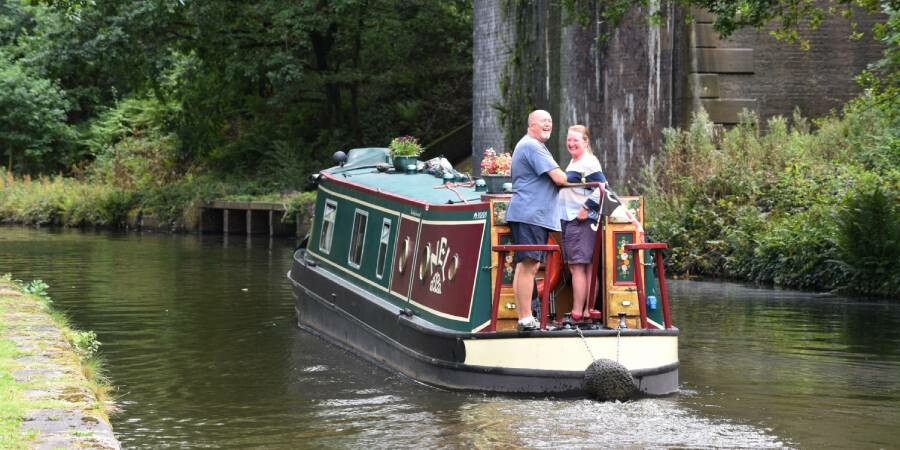 If you’ve been on your boat recently you’ll know that this trend continues. This time last year we were out of lockdown and boaters were making the most of their chance to go boating having been restricted for much of the previous five months. However, when comparing this year’s counts to 2019, the last year of data which was not influenced by the pandemic, there’s a 7% increase.

Wondering which region has seen the biggest bounce in boating? Well, that’ll be the East Midlands – over the last month lockages have been 43% higher than in 2019.

It’s not just lockages that reflect the increase in boating either. After recently signing a new contract with us, our main waste removal contractor, Biffa, has also reported an 8% increase in the amount of rubbish it’s been collecting from our canalside waste disposal points!

As someone who’s out on, or by, the water more often than most, you’ll know that there are times when we need to fix things that unexpectedly break. So, below, you’ll find a list of what may affect you if you’re planning to get out on your boat this weekend:

The pinnacle of the match angling calendar, the Angling Trust Division One National is being hosted by Northampton Nene Angling Club on the Grand Union Canal tomorrow (14 August). While there aren’t any navigation closures in place there will be long lines of world class anglers battling for glory. To avoid disruption to your journey, it’d be best to travel early in the day or after it finishes (it runs from 11am until 4pm). Full details of the location can be found on this notice.

When any restrictions to navigation happen, we get them up on to our website as soon as we can – always best to have a scan before you set off. You can set up your smartphone to automatically notify you if a notice is issued for a canal or river that you’re interested in. Check out this guide to setting it up.

Update on major maintenance work in Yorkshire & the North East

Over the past six months we’ve had to deal with unexpected failures of waterway components as well as some pretty horrendous stormy weather in the north of the country. We appreciate the adverse impact this has on boaters in the region and have been working tirelessly to get things back to normal as soon as we can. 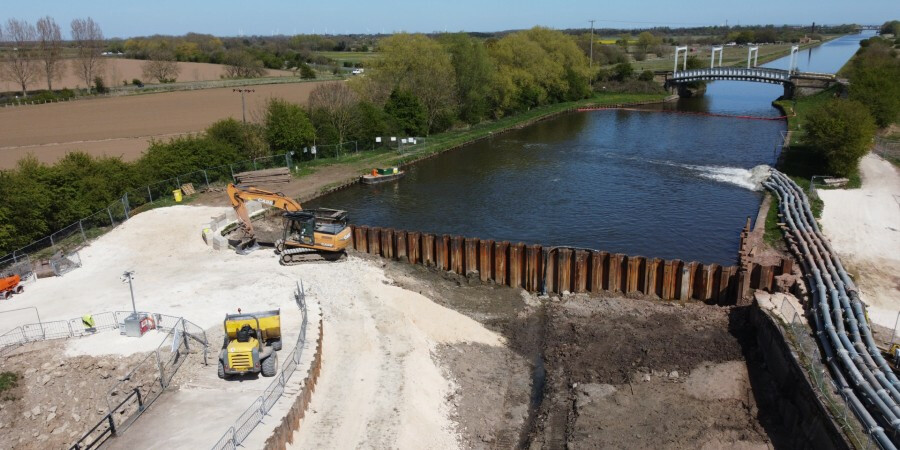 Repairs to the breach at New Bridge on the Aire & Calder Navigation are almost complete. The navigation will re-open on 23 August. A silver lining of this big project has been that we were able to take the opportunity to do other work on the navigation, which will minimise future disruption, during the stoppage: