This article follows on from the last one as Damian Kemp, our Boaters' Update editor, looks back at the previous 19 shows as Crick Boat Show celebrates its 20th anniversary. This time we're looking at 2002 and 2003.

The year got off to a good start with the foot and mouth crisis officially declared over. It was also the year in which bunting was strewn from lampost to lampost to celebrate the Queen’s Golden Jubilee – those who left it up in anticipation of the England football team’s success at the World Cup in South Korea may have been seen sheepishly taking it down after the team were knocked out in the quarter finals. Escape from the disappointment may have come in the form of watching the year’s most popular film - The Lord of the Rings: The Two Towers.

New openings on the waterways

While the world away from the waterways was a heady mixture of national celebration offset by footballing flop, on it there was plenty to be happy about. The Falkirk Wheel, along with the Union Canal, opened the week before Crick Boat Show and was followed, a couple of months later, by the Ribble Link.

The show itself was held over the Queen’s Jubilee weekend with the site most likely being set up to the beat of Eminem’s chart topping ‘Without You’. 22,000 people flocked to the show, perhaps after reading about it on the newly launched www.crickboatshow.com website (for the first time, over 50% of households had internet access: by 2017 this was 90%). Those attending would have been greeted by a ’50 years on the waterways, past, present and future’ theme. Sadly, no reports of demonstrations of robot-controlled hover narrowboats can be found but there was a reunion of Royalty Class boats.

2003 going from strength to strength 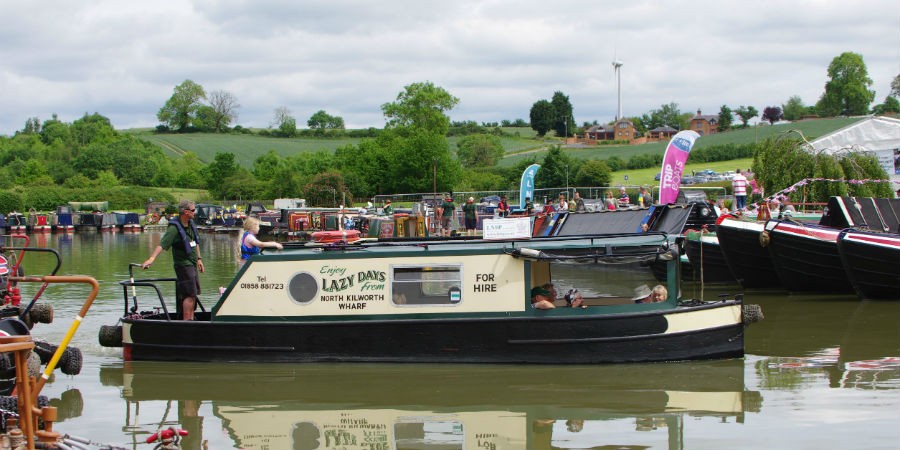 In the year when DVDs, for the first time, took a bigger market share than VHS tapes in the home movie market, the national news was of the launch of congestion charging in London, the opening of the M6 Toll, and Concorde’s last commercial flight.

Unlike the previous year nothing ‘big’ was opened up to boaters on the waterways but there was progress in the renovation of Stourport-on-Severn – where the Staffordshire & Worcestershire Canal meets the River Severn. There was also cautious optimism that work may soon start on the restoration of the Droitwich Barge and Junction Canals following the first stage of funding approval from the Heritage Lottery Fund and Advantage West Midlands.

The fourth Crick Boat Show – as captured in this BBC gallery – centred around a theme of ‘How they used to live’ with a strong contingent of historic boats in support. Reports of the day reinforced the view that inland waterways were going from strength to strength: “Traders’ takings were generally higher, builders took more orders and prospective boat owners had a dazzling array of boats and equipment to inspect.”

In the meantime, did you know that advance tickets are now on sale for this year’s show? You’ll save up to 15% on the entry price for the event, which takes place at Crick Marina, near Daventry in Northamptonshire, during 25-27 May, with an extra trade and preview day to be held on Friday 24 May in association with LeeSan.