The boat that reaches parts that other boats cannot reach

Our North area Boat Licence Customer Support team have recently acquired a new team member called 'Herbi' whose role is to ensure that there are no parts of the northern network of canals and rivers that we can’t reach when we need to.

Herbi out on the road on the northern waterways

'Herbi' is a Honwave T25, a two and half metre-long inflatable tender. Our team need it to gain access to craft not complying with boat licence terms and conditions that are moored on the offside with no access other than by water. We need access to serve important notices and other essential paperwork aimed at resolving licensing issues before we reach the point where we have to remove a craft using our powers under Section 8 of the British Waterways Act 1983.

Prior to the purchase of 'Herbi' the team used a “guddle”. To our team a guddle is a rigid metal fishing punt, with great stability but apparently “guddle” is also a verb meaning “to fish with the hands by groping under the stones or banks of a stream.”

The only downside of the guddle was that we needed to arrange a large van or trailer to transport it and it took at least four people to safely move the craft from vehicle to water and back.

With 'Herbi' being an inflatable, it packs away neatly into a normal size car boot and only takes two of our team to operate it. We are therefore able to utilise the boat much more efficiently and are able to access remote areas and narrow towpaths that were previously inaccessible with the guddle, the parts that other boats cannot reach. 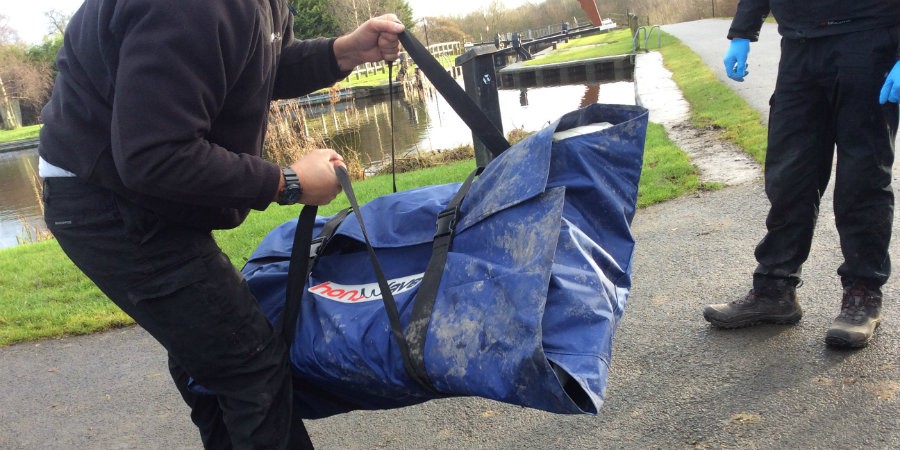 'Herbi' packs up into a relatively small bag

So far four members of our North Boat Licence Customer Support team have visited Liverpool Power Boats for training in how to correctly inflate and deflate the boat, how to maintain the boat and electric outboard, and how to fit the dolly wheels which make it easier to move 'Herbi' longer distances over land.

'Herbi’s' already been used to good effect over the winter and now has a rival, a yet to be named Vanguard 335 inflatable. The new boat has arrived with a new type of electric engine which the North team will put through its paces, particularly on the more challenging river sections of our network. 'Herbi' will be going on tour of the country allowing us to train team members from other areas so we’ve got crew whenever, and wherever required.

We are all looking forward to progressing cases that have so far been difficult to move forwards due to access issues, ensuring that all boaters using our waters are contributing to keep our canals and rivers open, flowing and fair for all.