Find out how I serviced my own boat engine after attending a training course and discovered that more maintenance jobs need doing. As ever the B.O.A.T has lived up to its reputation and I’ll need to bung on another thousand or so in repairs before we go boating this summer.

When I did my two-day engine maintenance course earlier this year I also booked a half day with a qualified engineer so that I had someone to metaphorically “hold my hand” whilst I delved into the contents of my engine bay for the first time. This turned out to be a jolly good idea for several reasons, not least being that the lovely Seb of River Canal Rescue arrived not only with van full of spare parts and tools but loads of enthusiasm and knowledge.

We spent the first hour revising things I had learnt on the course and checking that I thoroughly understood my own boat engine’s version of “the knee bone is connected to the thigh bone”. Seb made me point out and name parts, trace through air, water, diesel, oil and cooling systems, explain how they work and also checked my knowledge for diagnosing the most common faults likely to afflict my thirty year old Thorneycroft marinized Mitsubishi engine.

We’ve got a leak

A quick check of water and oil levels before starting the engine revealed a virtually empty heat exchanger. We topped up the water and started the engine and almost immediately a small trickle of water started to appear next to the battery boxes down the side of the keel tank. Ahhhh, I thought, that’s why there was so much water in that side of the bilge when I cleaned up the other week.

There’s a small hole in the top of the keel tank just where the battery boxes have been welded. We’d barely started on the service but first major repair job already apparent. Fortunately, I’ve got a good friend who’s a brilliant welder but it’s not going to be a quick job to disconnect the electrics, remove all the batteries, grind off battery boxes, weld plate to top of keel tank to patch hole, and then put it all back again.

The first job of the actual engine service was to change the oil. You must do this whilst the engine is warm. Eventually I managed to find a position in the engine bay where I could hold a container under the pump with one hand, operate the cock on the pipe, and pump the oil out, all without burning myself on the now rather warm engine.

Once the oil has been removed into an old oil container I had fun with a filter wrench removing the oil filter. It’s a really good idea to make sure you have plenty of spill mats to hand. A top tip from Seb was that the cut off bottom of a plastic 5 litre container makes a perfect sized drip tray for jobs like these. Putting a new oil filter back on the engine was relatively easy, as was refilling the engine with oil after I’d remembered to close the cock that allows you to pump the oil out.

Checking the condition of the fuel and changing the fuel filter was next up. Undoing the bolts and removing the actual filter was quite easy. The hard bit was ensuring that all the O rings were replaced, including the annoying tiny one that you can’t see that sits in a recess under the head of the filter. After half an hour or so turning the air increasingly blue I admitted defeat. It’s the only thing I didn’t do on this service.

Seb did it in one easy practiced move with the aid of a special pick. Putting the new O ring on was predictably incredibly easy. I then bled all the air out of the fuel system, luckily without having to bleed it on the high-pressure injection side, thanks to having an electric rather than a manual lift pump.

We found a novel use for one of my old hair bun rings to protect the coolant hose from rubbing on an engine bearer. We also tidied up the wiring and checked that nothing was loose that shouldn't be loose.

After checking the air filter and checking and tensioning the fan belt correctly it was time to start the engine again and check there were no leaks. The old girls starts nicely, almost always first time despite her age, but the vibrations at low engine speeds are alarming. Bad news item number two, all the engine mountings are shot and need replacing.

Replacing the engine mounts is a major undertaking as you have to disconnect the engine, gear box and prop shaft, then jack the engine up first at the front and then at the back to replace the mounts, then you have to ensure the engine is sitting perfectly level on the bearers. Next you’ve got to connect the engine back to the gearbox and prop shaft and ensure all three are perfectly aligned. As you can imagine it’s not a particularly cheap job but I’m calling in the experts for this one, I really don’t think I can do it myself. And finally, because we hadn’t noticed that the engine mounts were failing, the vibration has knocked a small hole in the exhaust which will need welding as well.

So mission accomplished, the engine is serviced. I am very happy that I have managed to do everything I need to do for a standard service apart from that difficult little O ring on the fuel filter (but I’ve already got a plan for that!). It has been well worth while doing the course and I feel a sense of achievement.

I hope I’ve inspired some of you to take a course and learn more about your boat’s engine. Boat may stand for Bung On Another Thousand but if you learn to do some of it yourself you can save yourself some money in the long run and also have a lot of fun. 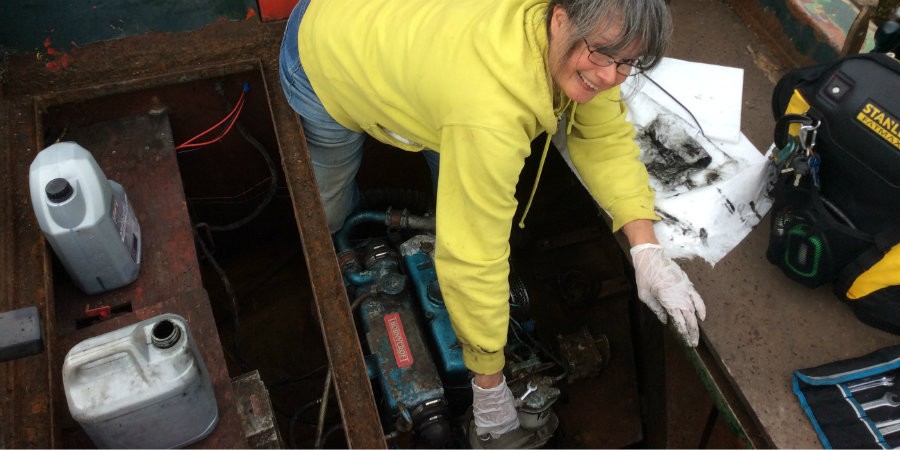