Debbi Figueiredo gives us the latest installment of her adventure in Yorkshire. 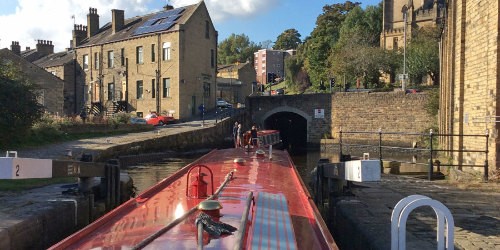 The approach to Tuel Lane lock is via a tunnel. When the canal was restored they had to combine two locks into one because the site of the original lock 3 had been built over. As a result the new lock 3 at Tuel Lane is the deepest on the English canal network at a scary 19 foot 8 inches. Fortunately you don't have to work this lock alone, it's operated by friendly Trust staff like Billy and much-valued volunteers.

Once into the lock they let the water in gently and we rose from the gloom into a brilliant autumn afternoon. Our original plan had been to head for Mytholmroyd but Billy had suggested stopping earlier at Luddenden Foot as good mooring and a choice of two good pubs. As I hadn't yet opened my birthday cards or presents we thought it a good idea. It had already been a long and exciting day.

A short and easy cruise later we were moored up on what must have been the old wharf serving the village as apart from a good straight stone edge I spotted two round shapes in the towpath that could have indicated crane bases. Presents and cards were opened and then we had the difficult task of deciding which pub first, The Old Brandy Wine or The Weavers. We decided on the latter as it was a little further than a stone throw on the opposite side of the road. It also had a balcony overlooking Ludd Brook, one of the many becks feeding into the River Calder in the bottom of the valley. We had such a cracking time at the Weavers we didn't make it to the second one. The quiz night was a hoot and the locals were very welcoming. Definitely a good place to stop if you are boating through. The Brandy Wine looked good too.

Reluctantly we went back to the boat for a much needed rest in anticipation of our first whole day exploring the joys of the Rochdale.

Before we set off we chopped vegetables and braising steak so that we could prepare a hearty stew while cruising for an easy hot meal when we decided to moor up for the day. While we chopped and prepped, we discussed our plans and worked out a strategy for doing our first locks solo. All the locks on the Rochdale are deep. Very deep. Most of them are similar depths to Denham Deep on the Grand Union Canal. We decided that Simon would steer going uphill as he is better at throwing ropes up a good height onto the lockside.

Ascending Rochdale locks you need to tie fore and aft rather than using a centre rope so it's a totally different technique to that which we are used to from the Southern canal network where we tend to rely on a centre rope. 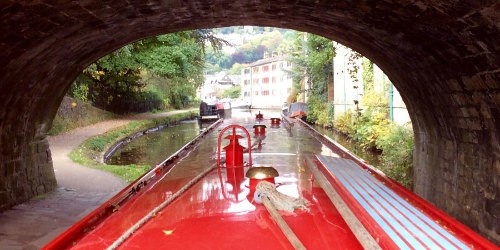 We left our mooring at Luddenden Foot and almost immediately passed over an aqueduct over the Ludd Brook. In brilliant sunshine with glorious autumn colours on the trees we headed towards Hebden Bridge with big smiles on our faces.

We managed ten locks on our first day passing through Hebden Bridge and ended up mooring outside Pickwell & Arnold boat builders as all previous attempts at mooring up had been thwarted and we were too tired to do another 4 locks to reach Todmorden.

What had seemed on a map in terms of miles and locks from our previous boating an easy day wasn't quite what we had expected. It was an enjoyable day of adventure and challenges. Badly moored boats, boats occasionally moored on lock landings, a sadly sunk wooden boat obstructing an easy access to a lock landing, a bridge that is actually a tunnel with a surprising bend, shallow bits, running aground again and again when trying to moor up for the night. The anti-vandal locks also take some getting used to but are essential to protecting water supplies as many of the original reservoirs that feed the canal were sold off to the water companies when this canal lay derelict and unloved before restoration. Big learning curve today but nonetheless still very enjoyable with fantastic scenery.

We ate our very tasty beef stew with dumplings and cracked open a bottle of wine. Whilst we ate we looked at the map reassessing the challenge we had set ourselves. We had Twitter messages from boater friends who have cruised this waterway. It's a challenge they said, can be hard work but the views are worth the effort. It's easier with a crew of four or a pair of boats and lots of crew. But it's just us two on an adventure of a lifetime. Bring it on!

After yesterday's adventure we decided to have an easy day. Just four locks up to Todmorden. Any aches and pains soon disappeared after the first two locks and we soon found ourselves in the centre of Tod and moored up on the 24 hour visitor mooring, close to the boaters facilities. There's water, rubbish disposal, Elsan and toilets here if you need them. There is also a rather splendid metal fish mural created in 2005 to admire.

A day in Todmorden 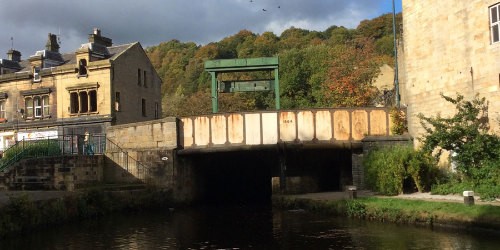 We needed to stock up on food and other essentials so shopping bags in hand we set off to explore. Todmorden used to straddle the county borders of Yorkshire and Lancashire as you can see from the ornate Town Hall decorated with symbols of both counties. Next to it is a wonderful covered market where you will find inside four fabulous butchers stalls, an amazing cheese stall and much more. Filled our shopping bags with locally produced and grown goodies before finding the remaining more mundane essentials in one of the two supermarkets conveniently close to the canal.

I decided to have a quiet afternoon with my embroidery while Simon went off to check out the various merits of the large number of pubs. The choice is good with a variety of styles from homely welcoming local boozers to a dependable large chain pub, and a couple of music venues serving a selection of real ale. Something for everyone here.

After a roast chicken dinner from our earlier purchases we popped into the quirky Golden Lion pub which is the closest to the visitor mooring for a night cap. All in all a thoroughly enjoyable day.