Debbi Figueiredo, our national boating co-ordinator is taking a boating holiday in Yorkshire. Find out what she's been getting up to on her travels...

It all started with a significant birthday and was originally just going to be two days of steam trains on the North Yorkshire moors...

But then we decided to make it more of an adventure and go boating too. We've lived on a narrowboat for many years but have never had a long enough break from work to make cruising in Yorkshire on our own boat a possibility until we retire. 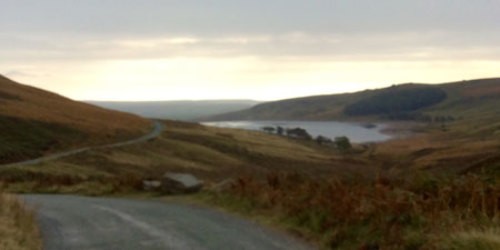 After steam trains we drove west to Ingleton across the moors to the Dales to revisit my partner's cave diving haunts of his youth, then finally the big day dawned, the dreaded big 50. We went the scenic route passing the Ribblehead Viaduct then after a while picked up the old Packhorse Road from Trawden to Hebden Bridge.

Traversing Widdop Moor down to Hebden gave us an insight to the challenging terrain and the difficulties of transporting goods over these steep hills. It's amazing that the the Rochdale Canal was completed as the first Trans-Pennine waterway as early as 1804.

The challenges for the surveyors and engineers must have been enormous but the financial imperative of the industrial revolution meant that the Rochdale was the first of three such canals to cross the Pennines, transforming communities, towns and industry. 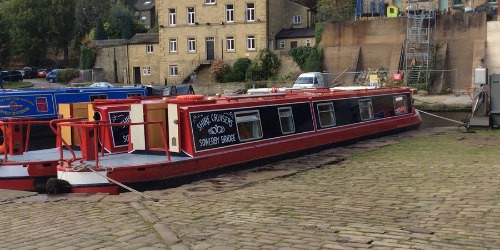 We arrived in Sowerby Bridge just after lunch time to a warm welcome from Susan and Nigel and team at Shire Cruisers. We were shown our new home for the next few days and quickly unpacked. Then followed a thorough walk through of the boat and then an equally thorough safety and navigational briefing.

We were soon under way with our instructor Simon to tackle the first three locks. Out of the basin and a sharp right at Kirkham turn onto the Rochdale Canal. Kirkham turn is named after Ralph Kirkham, a significant Yorkshire waterways campaigner.

We have boated for many years but on southern canals. Up here we're learning new techniques to deal with these large, deep double locks. The shallowest on our route is 7 foot 8 inches and the deepest at 19 foot 8 inches was just around the corner at Tuel Lane, the deepest lock on the English inland waterway network.