Welcome to the latest edition where you'll find out how the pandemic and severe weather has affected our winter stoppage programme. Along with that you can read about composting loos, the 2020 Lockage Report, otters, four million bricks and an iguana... You read that correctly!

Walking along the Macclesfield Canal in winter

Welcome to the latest edition. As we near the end of the sixth week of lockdown there is still uncertainty about how and when the current restrictions will be eased. There are, however, tentative signs, in terms of infection rates and hospital admissions, that we may be closer to the end than the beginning.

While we wait for more news from Government, not expected for at least a couple of weeks, this edition will help you while away a bit of time thinking about one of your passions – boating!

You can read about the impact of winter storms and the pandemic on our winter stoppage programme, lock usage over the last year, composting loos, and learn about the four million bricks that make up the Scheduled Ancient Monument that is Caen Hill.

As always, the routine round-up of news, stoppages and ways to get involved can also be found below.

PS In the last edition we gave some advice about accessing your COVID-19 vaccination if you are a continuous cruiser away from your permanent GP. One boater, who has direct experience of this, wrote in to offer more advice – wait until you receive your invite for a vaccination and then find your nearest GP and use this form to register with them. You’ll then be asked to supply the completed form, and your invite to vaccination, to the surgery. (Nb: if you’re over 70 the advice now is to make an appointment for your vaccine if you haven’t already had one.)

Hopefully most readers will have forgotten that I started the last edition saying that the ‘widespread snow across the network was receding…’. Little did I know that Storm Darcy was making its way to us, bringing the coldest overnight temperatures in more than a decade, gale force winds and plenty more snow. 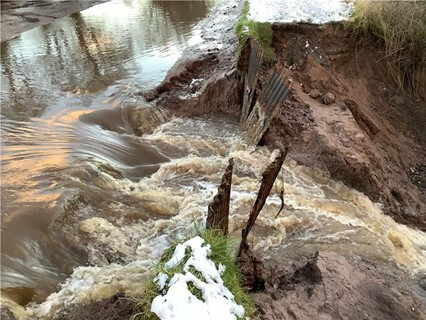 Darcy was hot on the heels of Christoph which had wreaked havoc only a couple of weeks earlier. It’s a sad fact that this more extreme weather is becoming more common – just look at this report on Storm Ciara last year.

What’s not common is trying to compete against it during the midst of a pandemic.

Straight after Christmas we resumed work on our major, £45 million, winter repair programme.  Despite teams being out in the worst of it, such extreme weather has, inevitably, delayed a number of projects and caused significant additional work through storm damage.

Wherever possible we are trying to stick to planned dates, but the impact of the storms is still being felt on many sites and, in many instances, water levels are still too high to restart work.

The other impact is from COVID-19. In an effort to limit the potential spread of the virus through contact at work we’re operating ‘work bubbles’. This is where the same small team work together to complete 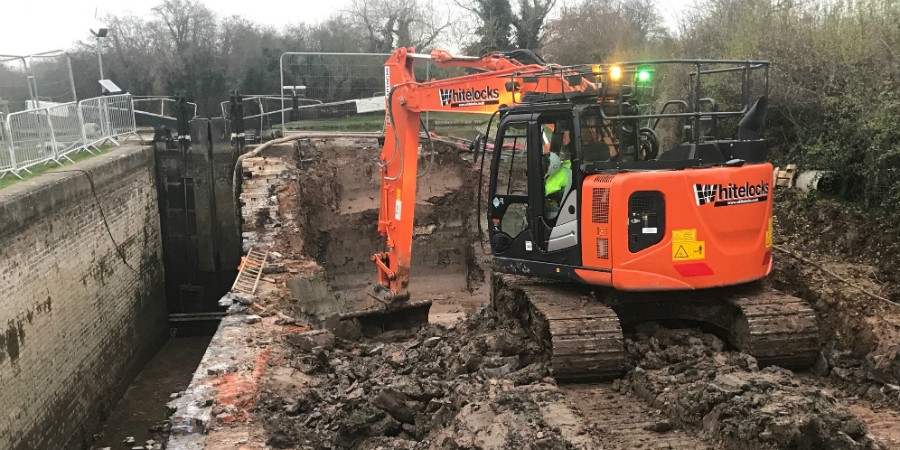 maintenance and repairs. However, if a member of that work bubble has a positive test then the rest of the team on site are required to self-isolate for ten days and the site effectively shuts down for that period. We’ve had several of these cases (below) which again mean, in a tight works programme, that a number of closures have had to be extended.

Even though only essential boating for those living afloat is permitted, we know that many boaters like to follow the progress of our works so that they’re prepared for when they can return to the water. For this reason we’ve been doing our best to keep our stoppage notice system up to date. If there’s a particular canal or river you’re interested in, the search facility will enable you to quickly focus on it. Below, you’ll find an overview of some of the work that’s been impacted by the floods, gales, snow and pandemic: 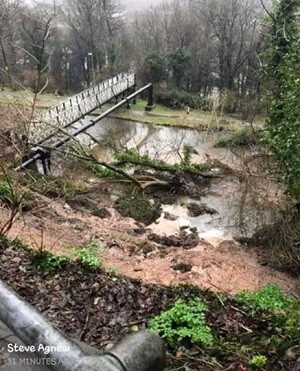 Many of the above are flooding-related but they aren’t the only victims of the stormy weather. We’ve had a land slip on the Trent & Mersey Canal near Anderton; a breach on the Shropshire Union Canal near Beeston; and a retaining wall collapse on the Rochdale Canal. There’s also been the breach on the Aire & Calder though this wasn’t down to storms. All-in-all the repair bill will run in to the millions.

As a nation we all saw a big surge in positive COVID-19 cases after Christmas which led to the current lockdown. Naturally, this pervasive spread of the virus didn’t spare those working on the stoppage programme. Colleagues, who we are supporting as best we can, were affected in regions ranging from the North East all the way down to the South West, unavoidably delaying projects.

As a boater you’ll have come across others on the water who dispose of their waste differently. There’ll be those using cassette toilets (Elsans), some with pump out systems and some with the relatively new incinerating toilets. Increasingly common though are composting toilets.  It’s the last of these that this article concentrates on.

The big difference with boat borne composting systems is what goes in to the mix – human waste. Most models, if not all, have two openings. 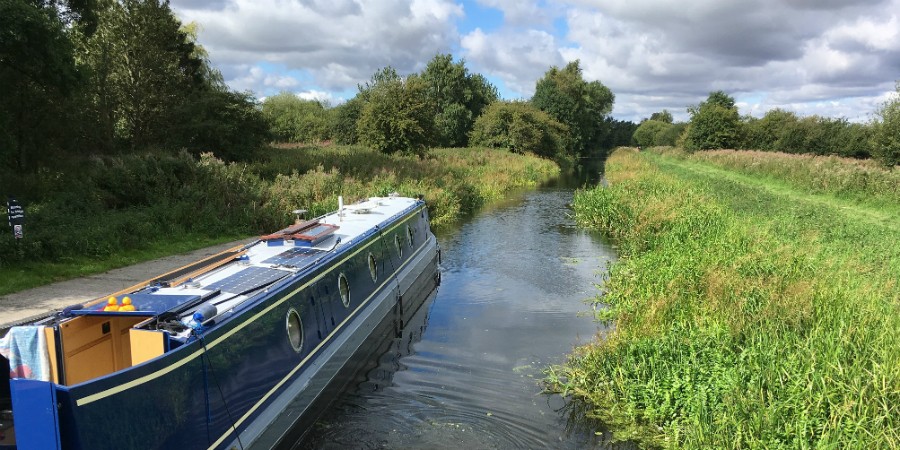 One for solids and the other for liquid.

Once you’ve made your deposit in the ‘solids’ compost bank, microorganisms get to work helping it decompose. Some designs recommend the addition of a carbon additive. This can be in the form of sawdust (pet bedding), peat moss or coconut coir to name a few.

There are a few reasons for this; the air pockets it creates helps with aerobic decomposition, it improves the carbon to nitrogen ratio (which is important if you plan to put your compost to work) and, perhaps most importantly if you’ve a sensitive nose, it reduces odour.

On that subject, and possibly the most asked question, is whether there’s a stink. Anyone who’s been to a festival that’s used composting toilets would be forgiven for thinking that the smell would drive you off the boat. That’s not the case with one you’d install on your boat though. Due to a tiny fan (like the one in a computer) air is always being drawn out of the ‘solids’ bank and vented outside the boat.

Depending on your, erm, frequency of use it’s difficult to say just how often you’ll have to empty the ‘solids’ bank. It is, however, highly likely that your waste won’t be garden-ready. What you’ll need to do is move it to a second location (such as your boat roof or warm engine bay – mesophiles, the teeny tiny organisms that do the composting, are a bit 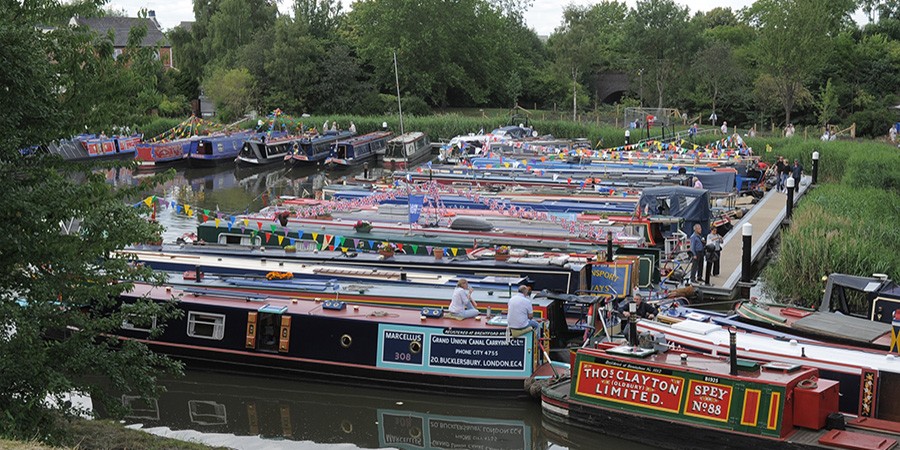 like Goldilocks – they like it warm but not too cold or hot) and regularly aerate it until it reaches its ideal humus state.

Do remember though, if you can’t keep it stored until it’s ready to use, it will still need to be disposed of in an appropriate way – for example a suitable composting site away from the canal. It should not be put in our bins – and absolutely must not be disposed of on or near the towpaths. Liquid waste can be emptied down an Elsan point.

For completeness here are a few simple dos and don’ts for everyone using onboard toilet facilities. To avoid blockages and problems, no matter what type of toilet system you use, you need to remember just a couple of simple rules.

If you’re interested in finding out more about composting toilets on boats, there are a whole host of interesting videos by boaters who have installed them.

Many boaters go the extra mile in helping to keep canals and rivers in good condition by volunteering (when coronavirus permits),  donating, or just picking up the odd piece of discarded litter. In whatever form your volunteering takes, we’d like to take the opportunity to say thank you. Your support helps make life better by water.

As someone who’s out on, or by, the water more often than most, you’ll know that there are times when we need to fix things that unexpectedly break. So, below, you’ll find a list of anything that’s happening that may affect you if you’re planning to make an ‘essential journey’ this weekend (no other types are permitted in lockdown):

When any restrictions to navigation happen, we get them up on to our website as soon as we can – always best to have a scan before you set off. The tech savvy among you may already know that you can set up your smartphone to notify you if a notice is issued for a canal or river that you’re interested in. For those that didn’t know, check out this guide to setting it up.

The monitoring of lock operations across the network remains an essential element in our water resources management but also to understand the changing patterns in boat use on the 2,000 miles of waterways in our care.

For obvious reasons there was a seismic shift in the volume of lock usage over the past year.

The main conclusion from the report is that total recorded lock usage in 2020 for the comparison sites (of which there are 172 locations this year) decreased by 32.9% compared with 2019. As alluded to above, the annual lockage was significantly affected by the pandemic.

The year saw distinct phases of use.  In the week before the first lockdown in March, there were around 3,500 weekly lock counts: during lockdown this reduced to below 1,000.  Post-lockdown numbers bounced back and from early July numbers soared, as boaters were able to cruise freely and hire boat firms recorded heavy bookings, with many people choosing staycations.  Lockages stayed at over 12,000 lockages per week for most of the summer, with a peak of 13,700 lockages in mid-August.

Despite this unprecedented change in network usage in 2020 (typically we see only a 2-3% change in lockage from year to year) Hillmorton Lock 2 & 3 was still the busiest site on the network, as it was in 2019, with a total of 5,933 lockages recorded. The report, which is now in its 20th year of production by the water management team, can be found on our website.

Not a question I ever thought I’d ask in Boaters’ Update but, what do otters, four million bricks, and an iguana have in common?

It’s our Caen Hill virtual open day! As hard as it may be to believe, all three are talked about in the interactive open day. You know what they say though, seeing is believing… Let’s start with the four million bricks:

To find out where the otters and, more curiously, the iguana fit in, as well as a passionate retelling of the history of the flight (among others), head over to the Caen Hill virtual open day webpage.