Debbi in the boating team recently went on her longest cruise for 15 years. In this latest instalment her boating holiday blog, she finally reaches a stretch of waterway that she’s not cruised before.

We left our overnight mooring at Great Haywood with some excitement, knowing that within a matter of minutes, we would be cruising on a stretch of the Trent & Mersey canal that we’d never seen before. As we reached the junction with the Staffordshire & Worcester canal a faint rainbow appeared above the iconic bridge, a good omen we hoped for this part of our trip. We should have known better, it was a warning to keep our waterproofs on! More than once we sheltered under a bridge hole when the rain was particularly heavy.

Stocking up at Stone 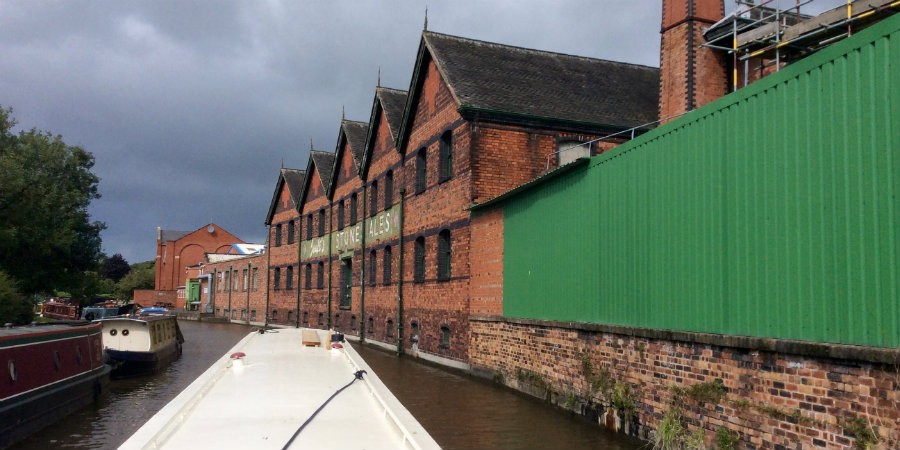 Cruising past the brewery in Stone

We soon reached the attractive town of Stone and stopped for an hour. There are plenty of visitor moorings south of the first lock in the Stone flight, and a water point below the bottom lock too. I hit the shops for food supplies, and my partner checked out the boat yard chandleries, just in case there was anything else that we might need that we’d forgotten from our pre-trip checks. Tempting though it was to stop and explore Stone further, we pushed on north towards Stoke-on-Trent.

Our cruising plans have always been push on out fairly hard to reach our planned destination. This allows us to come back in a more leisurely and relaxed manner, having sussed out the best places to stop, and sights we want to explore more closely. It’s also prudent to know roughly how long it’s going to take to get somewhere, and then always give yourself extra days for the return journey, just in case.

The majority of the canal network is well over 200 years old and takes a lot of looking after. It’s worthwhile factoring in that occasionally things go wrong. Allowing extra time in your cruising plans is especially important on river navigations, where heavy rain can lead to having to wait it out whilst water levels recede to a safe level.

After a somewhat damp but short afternoon, we called it a day at the village of Barlaston, where there’s a pub owned by a well known television personality adjacent to the visitor moorings, and a village general store on the opposite side of the canal. We retired to bed early in preparation for the following day, when we planned to tackle the locks in Stoke on Trent, and hopefully passage through the famous Harecastle Tunnel.

Next time, it's into the dark of the tunnel and then the Cheshire locks.