A weekend of boating in Yorkshire

After yesterday's rest we planned to push on to the village of Summit just over the west side of the highest broad canal summit pound in England. We set off from Todmorden in a light drizzle with the guillotine gate our first obstacle. It was surprisingly easy to operate and we were soon on our way.

The locks come thick and fast here with six in quick succession so no photos sadly of the ornate Gauxholme railway bridge as I was too busy and the drizzle was persisting. Must take photos on the way back as it is not your average railway bridge.

At Gauxholme Highest lock we met another Shire Cruisers hire boat heading back to base. They mentioned they had a bit of bother with lack of water towards the summit pound but that they got through ok.

We carried on under the low Copperas House bridge towards Walsden climbing steadily with the hills around us becoming increasingly bleak and rugged. We decided to push on from Walsden but by the time we had reached Winterbutlee lock we were beginning to have doubts as a few walkers we passed on the towpath were warning of low water ahead as well. 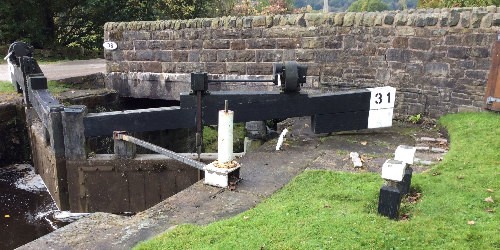 Coming out of Lightbank lock with its unusual gate opening gear Simon ran aground. No efforts with the pole could get him off. The next lock was tantalisingly close but our boat was going nowhere. I walked up to Sands Lock and dropped a lock full of water down.

A brief refloat then stuck fast again. I walked up to the lock beyond and dropped that one too. Still no good, Simon was stranded in the middle of the cut. We ran a little water but didn't want to run too much as the pound above looked a bit down as well. In the end it was decided that I should put a call into the Trust emergency number and then I would walk up to the next lock half a mile away and drop that one too.

Except when I got there, it was empty, and the one beyond that too. All the way to the summit to flush some water down then a long walk back to discover that Simon at last had managed to pole into the lock. Up we went and then painstakingly slowly, frequently running aground again we reached lock 34.

We swapped places exiting lock 34 where I had the somewhat scary experience of getting trapped on the upper cill. Simon went to run water from the summit as there wasn't anyone available to assist who could reach us before it got dark. Too late to wind the boat, impossible to moor up, we had no choice but to push on to find a safe place to moor for the night. Kicked myself for not heading the warnings about lack of water. They weren't kidding. The canal was virtually empty!

Coaxed the boat very gently over the short pound between lock 34 & 35 just floating over the cill into Warland Upper lock. Couldn't initially open the swing bridge on the upstream side of the lock but think after 16 tough locks I had run out of go. Simon sorted it and we moored up for the night on slack ropes to allow for variable water levels at the lock 36 visitor mooring, just short of the summit, thoroughly exhausted.

We got up reasonably early hoping that the water levels had recovered overnight. No such luck, we were firmly aground and on a slight tilt. We decided a jolly good fry up with some of the goodies we had purchased in Todmorden would assist decision making and very delicious it was too.

So 13 locks down to Littleborough and back up or 9 down to wind and 9 up again to Summit village? A conversation with a local resident of Summit walking his dog decided it for us. He said he'd never seen the 7 foot deep summit pound so low. We didn't want to waste water and get even more stuck. Using 18 locks to wind is a lot of water. We gave up on reaching Littleborough. Going down to wind would leave the summit desperately short (minus approx 200,000 gallons or more of precious water) and possibly leave us short going back to Walsden. 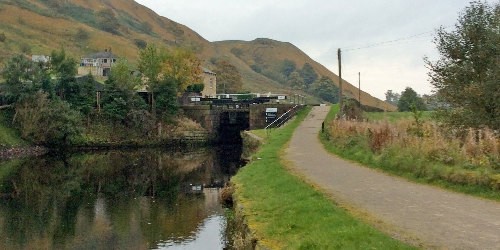 So what to do? Obvious really as we weren't going to waste water. We decided to wind above Longlees lock and reverse across the summit to the water point at West Summit lock. It was fun and pretty easy reversing across the summit. With gentle use of the throttle and boat pole we were soon on the visitor mooring above West Summit lock where we discovered the water point was out of order. Fortunately we aren't desperate. Our longest lock free cruise of recent days and it was backwards!

We walked down the flight from West Summit passing Chelburn Wharfe visitor mooring restored by the Rochdale Canal Society between 2006 and 2007.  Many pounds were low and would have required water to be let down for passage. Satisfied we had made a sensible decision we set off in search of the two pubs and village shop indicated in our guidebook.

We soon found the sad remains of what was once the Punchbowl pub, more recently named the Sportsman. Closed. Very closed. Walking up the main road we found what must have once been the villages stores. Obviously went out of business years ago. We kept walking thankful that we still have sufficient supplies until tomorrow.

Fortunately The Summit pub has just reopened within the last few days. Thwaites real ales, a toasty wood stove, and a warm welcome. We had a pint and a lovely chat with the grand-daughter of the new landlord who was working behind the bar. Then back to the boat and prepping Lancashire hot pot as we now just over the border from Yorkshire. We will be revisiting the pub tonight, after all it is Friday.

Escape from the top to water we could float in

Overnight the water level recovered 6 to 8 inches. We were relieved and sat down to Todmorden made sausages in a baguette. Whilst we ate we noticed with alarm that the water level had dropped again as water was being run off. We finished breakfast rapidly and got ready to move before the level could drop any further.

As we pushed off our overnight mooring spot the sun came out bathing everything in glorious light igniting the colours of the bracken and heather you get up here 600 foot above sea level. It really is lovely up here even if the main road from Manchester to Halifax follows the Rochdale canal so closely. But the plus side of the narrow valley is that you are never far from bus or train transport to explore this lovely canal by foot.

Approaching the eastern summit lock we ran aground three times. I was supposed to be steering but the water level was so low we worried about getting into Longlees lock. Simon took the helm in case his superior strength with the boat pole was required. As we negotiated into the lock a very helpful member of staff ran past apologising for the low water levels apparently caused mainly by a failed lock cill at lock 32 as well as lack of water. He ran back past us some while later to check we got off the summit ok.

Finally into the Eastern summit lock and we swopped places. Si set the next one and opened the swingbridge to allow me a clear run in. It's been a while since I've taken the helm but it soon came back, just like riding a bike. There was much running up and down trying to use the water from the lock we were emptying to fill the next and ensure enough depth to get into the next lock down. Slowly but surely we made progress and the water under the keel became steadily deeper.

Finally we made it safely down 8 locks to Travis Mill lock to fill up from the water point on the offside, negotiating a Trust hopper with mini digger without any major issues. Then reversing off onto the towpath side to the mooring outside the now sadly closed Cross Keys pub. 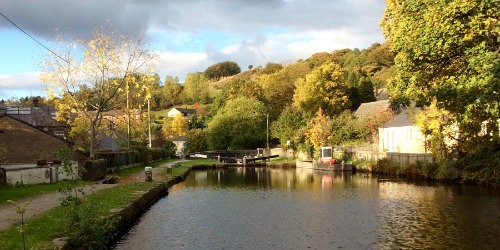 The views descending from the summit were dramatic. Wish I'd had more time to wander about with a camera but I was too busy remembering how to steer in an occasional gusty cross wind hanging back from lock landings to avoid running aground.

Simon went off to find a pub and Rugby World Cup TV coverage and I caught up with my sewing. Sadly the nearest pub to the village is actually in Tod and Simon had to catch a bus back to the boat as it was nearly two miles away. Still, we had a lovely quiet night at Walsden and a good night’s sleep.