This week sees the start of drop-in sessions on towpath improvements in West London: the Bulletin has all of the details. We're also looking at the Queen Elizabeth Olympic Park's Carpenters Road Lock, where an exciting project is bringing local school kids to the canalside.

We had a successful Forum meeting on Wednesday. We’re very grateful to everyone who made the effort to come down and take part in group discussions about key issues raised at the last Forum. There were also presentations about the impact of HS2 on the London Waterway, the forthcoming Quietways consultation, the London Mooring Strategy and Enforcement. We have the slides from the meeting and will be sharing a record of the sessions very soon. 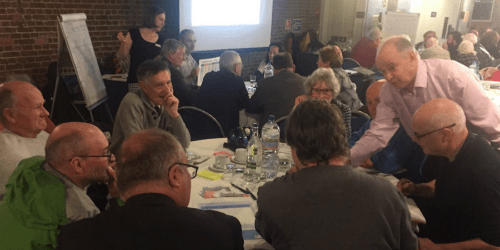 The future of bookable moorings at Rembrandt Gardens

The Forum included a brief update on what bookable moorings at Rembrandt Gardens will look like in 2017. Further details will be in the next bulletin, but changes are coming!

Celebrating the old and the new at Carpenters Road Lock

People of all ages have been getting involved with the restoration of Carpenters Road Lock in London, from local school children to proud east Londoners wanting to tell the story of their local area.

People’s memories are important, they help to tell the story of our well-loved waterways. We recently called for volunteers to help us record some oral histories – local people telling their stories and memories of Carpenters Road Lock. A mixture of new and existing volunteers signed up for the opportunity, and took part in four free workshops with Eastside Community Heritage where they learned how to interview people about their lives and experiences. Our volunteers gained new skills and interesting insights into their local heritage.

Joanna Steele, heritage activities officer commented: “Some of our volunteers felt they had a duty to tell the story of east London before the landscape changes beyond recognition. After the training, the volunteers were initially nervous about going out on site and interviewing strangers, but built up a great deal of confidence within minutes of putting their new-found skills into practice. We hope that these oral history recordings will contribute to the heritage interpretation placed around the lock.” 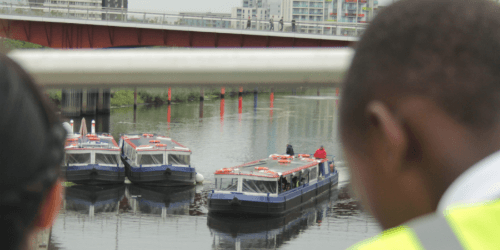 It is especially important to introduce the younger generation to our canals and rivers, raising their awareness of both the waterways themselves and their local heritage. Many children living near Carpenters Road Lock have never been on a boat or even seen a lock, so we wanted to take the opportunity to give them some life-long memories. We will be delivering 14 boat trips, and 52 land based trips in the Queen Elizabeth Olympic Park. In 2017 we’ll be delivering a total of 38 more land based trips and 10 more floating classroom trips. The children are learning about why the lock was built, the process of the restoration including materials used and how the lock works. With the Explorers team, we’re also delivering water safety training sessions in local schools for over 600 children.

Hopefully you’re very familiar with the winter stoppages. Here’s a breakdown of the big ones on the Trust’s London Waterway:

There are others. Don’t get caught out.

Winter moorings proved very popular this year and we’ve sold spots on every site in London. We hope, as much as possible, everyone has the booking they were after! Please remember that your winter mooring is only valid for the dates outlined on your documents; you may not arrive early and must move as soon as the time period has expired. For any period that your boat may be at the winter mooring site without our permission (which would be the case prior to the mooring start date, or after the mooring end date) you may be charged an overstay charge of £25 per day. Full details are set out in the terms and conditions.

A reminder about winter stay times on London’s visitor moorings

We’ll therefore not be relaxing stay times at visitor moorings in central London, nor at other very short stay moorings in the other parts of the London Waterway region.

The visitor moorings where we won’t be relaxing stay times this winter are:

These will have signs indicating that the stay time applies all year. Stay times on all other visitor moorings will be relaxed to 14 days.

Actons Lock on the Regent’s

Our team have been investigating the leaking gates here this week, thanks for bearing with us. It’s not looking like a quick fix will be possible, but our engineers have a much better idea of the challenges and we’ll provide further information in the next bulletin.

Don’t forget that filming of a major motion picture will be taking place between 3pm and 1am on 8/9 November and again on 9/10 November 2016 at various locations across the Little Venice pool. The towpaths will be closed and marshals will be on hand to offer diversions. Boats may be prevented from entering the pool and will be asked to wait. Please listen to advice from marshals.

We’re very grateful to the team of engineers from Ford Motors that volunteered for a couple of days recently, cutting back vegetation and widening the towpath along the Stort navigation at Harlow. If your employer offers volunteering time away from the office and you fancy a day on the towpath, get in touch with us.

One of our sister blogs has some interesting insights on being a good neighbour whilst keeping warm with a solid fuel stove. Veterans of the challenges at Islington Visitor moorings won’t be the only ones to find interest. Please have a read.

There’s lot to think about if you’re winterising your boat. The Trust has some handy hints.

Don’t forget that Jena – our Widebeam – will be out next week for drop-in sessions on the Quietways programme. Come along to give us your feedback! 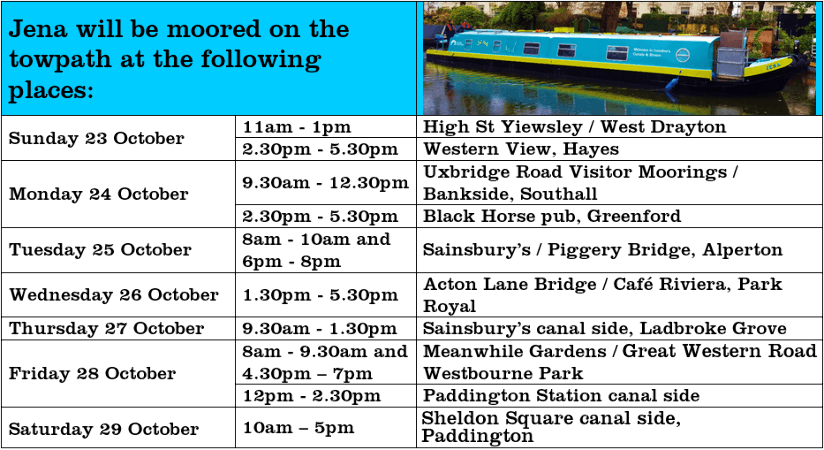 The Trust has put together a short film that showcases some of the mouthwatering delights to be found along London’s canals and rivers, seen through the eyes of the best critics of all – the customers. Check it out!

Popular HARCA are leading a volunteer day to celebrate the start of the super adoption of the Limehouse Cut which includes a wide range of community partners who use the canal. The day will include litterpicking on the towpath and on the water and volunteers are meeting at 9.30am at Poplar Union, 2 Cotall Street, Bartlett Park, E14 6LT. Local volunteers are encouraged to come along on the day!

We have received funding to rejuvenate the hedge at Havelock near Southall and there will be a volunteering day every Wednesday in November to prepare the site. If you are interested in finding out more please contact Jack Newman, Volunteer Team Leader.