Our St Pancras Open Weekend is very soon! Read on to find out more. This month we're also introducing new members in the London boating team, advising of a change to the date of the East London Waterways Festival... and February will see us #showthelove!

Sam B at the #showthelove photoshoot

The Canal & River Trust is getting behind the Climate Coalition and their Show the Love campaign. On Valentine’s Day, people across the country will show the love for all the things that are affected by climate change through the power of green hearts. Why not get involved? "Whether you make one, wear one or share one, each green heart is a moment of possibility — a chance to begin a conversation about the things we love that climate change threatens and the opportunities for a world powered by clean and secure energy."

Don’t miss it — it’s the highlight of our winter works in London! This is your chance to learn more from heritage experts, engineers and volunteers about St Pancras Locks on the Regent’s Canal, in particular the replacements of the top and bottom lock gates.

You will be able to walk in the drained lock chamber, seeing first hand the exceptional engineering work that helped construct the canal and talk to our experts about the essential restoration and repair work being carried out. 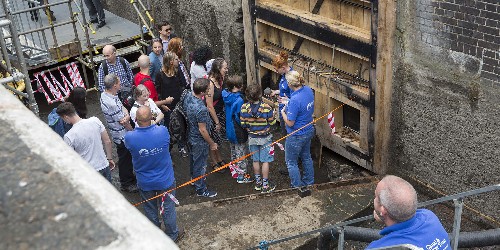 During the weekend, you can also follow guided heritage walks from Granary Square to Islington Tunnel. Plus, we'll be teaming up with local trip boat operator, Hidden Depths, to offer boat trips to the London Canal Museum.

Visitors with a head for heights will also get the rare chance to go to the top of the St Pancras water tower. This was originally built to supply steam trains with water, the Grade II-listed tower was moved in sections by a huge crane to its current canalside location in November 2001.

Due to an unforeseen delay to the restoration of Carpenters Road Lock, the East London Waterways Festival, originally scheduled for the end of May will now take place from 26 to 28 August, with the main event day and formal opening ceremony taking place on Bank Holiday Monday 28 August.

The new August date will ensure the lock is ready, fully commissioned and tested before what will be a fantastic event celebrating the re-opening of the Bow Back Rivers and Queen Elizabeth Olympic Park waterways.

If you are keen to take part in the celebrations and a cruise, which will involve a tidal extension to Bow Creek and the Thames, please email waterways@londonleagcy.co.uk.

Additional dates for your 2017 diary

Here’s a taster of the things you should get in your diary now. Let us know if there are others and we’ll feature in future bulletins:

IWA Canalway Cavalcade in Little Venice: 29 April to 1 May

Rickmansworth Canal Festival: 20 to 21 May

4 January to 31 March – Brick Lock (Lock 14) on the Stort will be closed. This was to have ended on 17 March but has been extended.

9 January to 10 February – the Regent’s will be closed at St Pancras Lock (Lock 4). This was brought forward from the original dates.

27 to 31 March – a new bridge is being installed near Camley Street in St Pancras. The navigation will remain open but there may be delays.

There are others. Don’t get caught out. 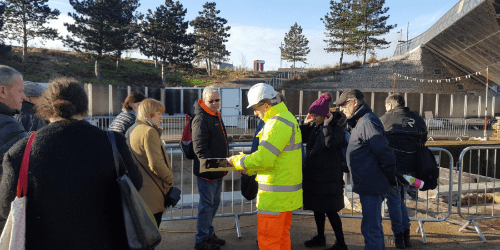 Work is well underway restoring Carpenters Road Lock in Queen Elizabeth Olympic Park and we’ve already recruited a team that will be in place to operate the lock as well as supporting school visits. Joanna Steele, the our Heritage activities officer, said: "I’ve been so impressed with the team of volunteers we’ve assembled. They’re all really keen and love sharing this lock’s fascinating history."

And would you like to be a volunteer lock keeper in 2017?

There’s still time to apply if you’re thinking of joining our wonderful team. You can help to keep the historic tradition of lock keeping alive along your local canal. Full training is provided and people of all ages (over 18) and experiences are encouraged to apply. Volunteer lock keepers work on a shift basis throughout the year, with busier periods typically expected between April and October.

Rosemarie Coffey has volunteered at Old Ford Locks since last year. She says: "I’ve really enjoyed working as a lock keeper. We’ve got a good team of four of us, a typical day will revolve around helping people through the locks, painting and even gardening. We also get a lot of people on the towpath stopping to watch the boats and asking questions about the canal. It’s great to work outdoors, that for me was the main draw to volunteering on the waterways, and it’s certainly something I’d recommend to other people too."

Applications will now close on 10 February.

All change in the London boating team

The boating team has recently seen some new arrivals, and a change of focus, so that it can better support boating and boaters in London. In November we said goodbye to Mikaela Parrack, one of our first mooring rangers, who left to pursue a new life abroad after three years in the job. Our small team of three is now back up to full strength with the arrival of new mooring rangers, Gareth George and Alexander Gudmestad.

Just like Mikaela, they are both boaters and will be working to support our boating customers with information and guidance about moorings and facilities. They will also be helping to improve services and the management of moorings, as well as working to engage boaters and local communities in our work. They will each be responsible for half the waterway region, with Gareth looking after the West (from Kings Cross to Slough/Rickmansworth) and Alex taking care of the East (from Islington to Hertford/Bishops Stortford). Mark Harrison, currently our temporary mooring ranger looking after the outer London areas and winter moorings, will be supporting the team until the end of the winter mooring season.

In another change Sorwar Ahmed, who leads the team, has a new job title. Currently boater liaison manager, he becomes waterway boating manager to reflect his wider responsibility for planning and delivering boating services in London, in addition to liaison and communication with boating customers.

A guide to double mooring

What’s the etiquette when it comes to double mooring? How well behaved are you when it comes to breasting up? One of our sister blogs recently made some suggestions. What do you think? Have any been missed?

A follow up blog has now been published providing some context to mooring etiquette and top tips collated from your feedback. Do you agree with the top tips, or have you anything to add? Keep your views coming in: please email the Boating Team or contact us via our Boating Facebook page or @crtboating on Twitter.

Come along and help us to maintain your local stretch. Here’s some future events:
7 February – Rammey Marsh Lock

A simple patch of grass next to Stonebridge Lock on the River Lee is set to be transformed into an edible garden, after receiving a £12,000 donation from Tesco’s Bags of Help initiative. 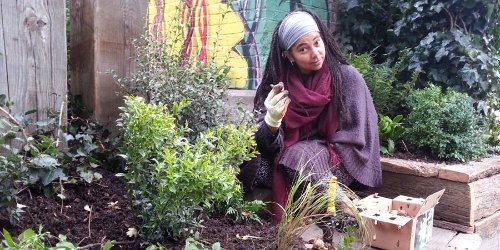 The garden project is led by us, in partnership with Action For Kids and Stonebridge Lock Café. It will see the space landscaped, with large timber beds installed for growing vegetables and six fruit trees planted. In addition, the work will also act as learning opportunity for young people.

Jeannette Brooks, our development and engagement manager, said: "The money is going to help us transform what at the moment is a pretty boring bit of grass. It’ll certainly be a first for this stretch of the river. It’ll be great to work alongside Action For Kids and the café to make sure that young people can help with the work."

Quietways are being established by Transport for London (TfL), the London Boroughs, The Royal Parks and the Canal & River Trust to create a network of quiet cycle routes throughout London. Work starts soon on improvements to the towpath to the Paddington Arm. Between 26 January and 31 March 2017 we'll be resurfacing and widening the towpath between Bridge 12 (Piggery Bridge - Manor Farm Road) and the North Circular. This will require some sections to be closed. We'll aim to keep this to an absolute minimum.

Towpath works on the Regent's

In February we’re planning to start some improvements to the towpath surface in Islington, between Wharf Road Bridge and Sturt’s Lock, funded by a Section 106 planning gain contribution from Hyde Housing Association. The work isn’t anticipated to involve any navigation or towpath closures, but do look out for local signage.