The latest news from the London waterways.

This winter we're replacing the lock gates and holding a free weekend at Kentish Town Lock - one of the busiest locks on the entire canal network.

We'll have to drain the canal to carry out the work, so at the same time we're going to give you the opportunity to venture down into the depths of the lock and see what it looks like from a totally new angle. 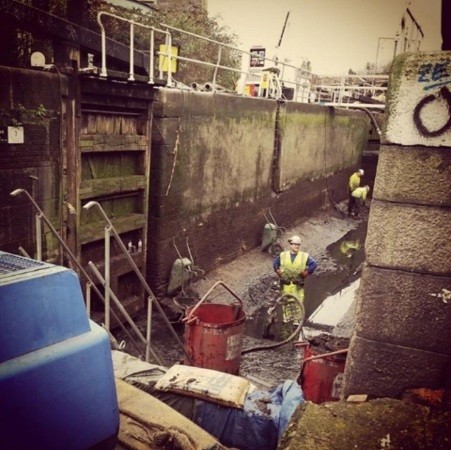 The open weekend is Saturday 23 January and Sunday 24 January 2016, from 10am to 4pm, so come and meet our friendly and knowledgeable maintenance crew, who will give you a guided tour of the site. Visit us and bring your friends and family. Everyone's welcome!

Please note that car parking is not available. Public transport is your best option and the nearest stations are Camden Town on the Northern Line or Camden Road on the London overground.

Devastating floods in the north

Here in London we seemed to escape much of Christmas’s terrible storms. People living on or near rivers and canals in the north of England were not so lucky. 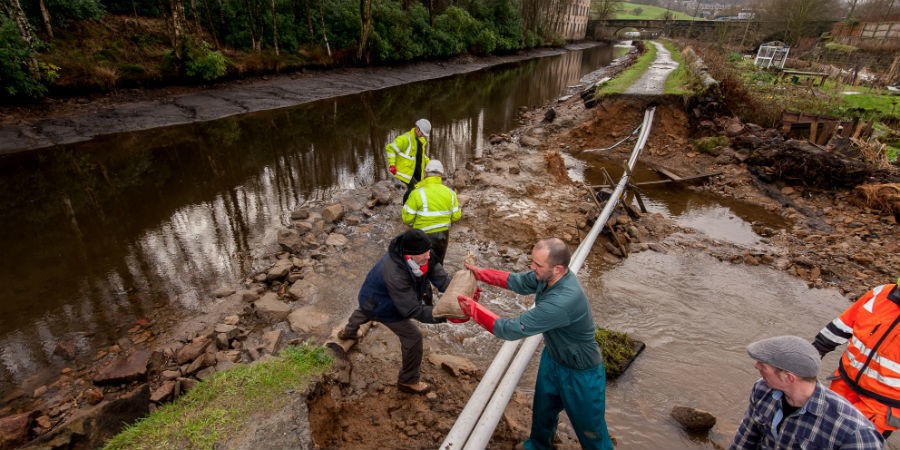 A number of the Canal & River Trust’s waterways have been severely damaged. Bridges, embankments and canal banks have been affected and many stretches of towpath have been closed. But people are coming together to help re-build and we have a selection of really inspiring stories on our website. Of course, repairs are going to cost millions and we’ve launched a flood appeal. Please consider making a donation.

Just a reminder that you can now stay for 14 days at designated visitor moorings over the winter, except in central London. This means the signed stay times apply all year round on the Regent’s, Paddington Basin, Little Venice and all very short stay moorings (4hr/24hr/48hr). They will all go back to the signed stay times from 31 March.

Our Volunteer Lock Keepers play a crucial role on the London waterways and help keep age-old traditions alive. In 2015 we had over 70 dedicated volunteers assisting boaters, greeting towpath users and carrying out maintenance work at locks across London. This year we hope to recruit more people to join the team, with a particular focus on some of our busier central London locations and at weekends. Recruitment is now underway and the closing date for applications is Friday 29 January. Click here to find out more about being a Volunteer Lock Keeper, opportunities in your area and how to apply.

Join us at Towpath Taskforce to help blow away those winter cobwebs!  We’ll be out at Kensal Green, Southall and Haggerston helping to get our towpaths looking their best.  More information on each of these events can be found by clicking the links below.  All tools, equipment and instruction will be supplied, please wear old clothes and hard-soled footwear and if the weather forecast is looking wet, don’t forget the waterproofs!

How are you receiving your “snail mail”?

This might be worth a look if you’re living on a boat and struggling to keep on top of your post: www.boatmail.co.uk. We have not used the service ourselves and do not endorse it. Let us know what you think, or if you know of alternatives that work for you.

We’re pleased that the new Elsan and pump-out at Talavera Moorings at Acton’s Lock, Haggerston is now fully open for use by all boaters. Formerly known as Bluebell moorings, the site has now been re-named to reflect the historic street name of the area. Now that modifications have been completed to the overflow weir, pontoon design and clearance of underwater obstructions, this new facility will now provide a welcome addition to the level of services available between Little Venice (Elsan and pump-out) and Victoria Park (Elsan) / East Wick (pump-out). Please note that there is no drinking water supply at the service mooring, although there is a tap for use with the Elsan. Water and power provided via the bollards at the Talavera moorings are for permit holders only, so if you need to fill up with water please use either the water point above City Road Lock or at Victoria Park.

You may have seen Mark Harrison on the towpath. He joined the team last month, focussing on managing our winter mooring sites. Mark is from a customer service background and, being a keen hiker, is no stranger to being outside in all weathers. 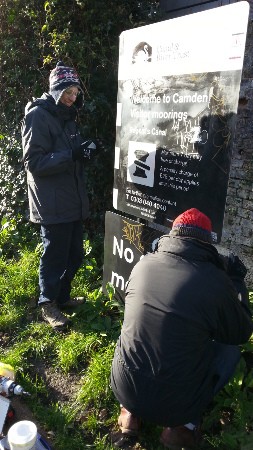 “I’m learning so much about life on the cut,” said Mark, “It’s fascinating. I’ve met many boaters on the winter mooring sites already and everyone has been friendly and welcoming.” Winter moorers will soon receive, if they haven’t already, an introductory note from Mark. Please get in touch with him if you have any questions or concerns and feel free to let him know how you’ve found your winter mooring.

Now that the new ramp, towpath works and landscaping have been completed between Maiden Lane Bridge and the Granary Square steps, the moorings are being returned to use for general mooring. Contractors are currently dismantling the pontoons, which will be re-used elsewhere on the canal, but storing them near-by until needed. Please wait for the site to be clear before mooring in this section again, and help us by not tying up to the pontoons while they are in storage.

We’ve been keen to see development of the Hazelmere site and pleased that this will see new facilities for boaters in 2016. Our aim was to keep disruption to a minimum. All sewage, whether pump-out or Elsan, needed to be pumped and due to lack of power and vandalism it was not possible to maintain the facilities in a working state.

The closest facilities north are:

The closest facilities south are:

Vandalism has been a serious problem with the shower facilities at Stonebridge. We’re considering closing the showers to all but those on the permanent moorings. If you’d like to comment on this, please contact us at: enquiries.london@canalrivertrust.org.uk.

We all know that life on the canals has its risks but winter is a particularly difficult time. Everyone – boaters, cyclists and pedestrians - needs to think about ice and use caution during the dark evenings. Please take particular care if you’re navigating the cut or using the towpath on your own or if you’ve been drinking. For advice on winter cruising, please see our website. 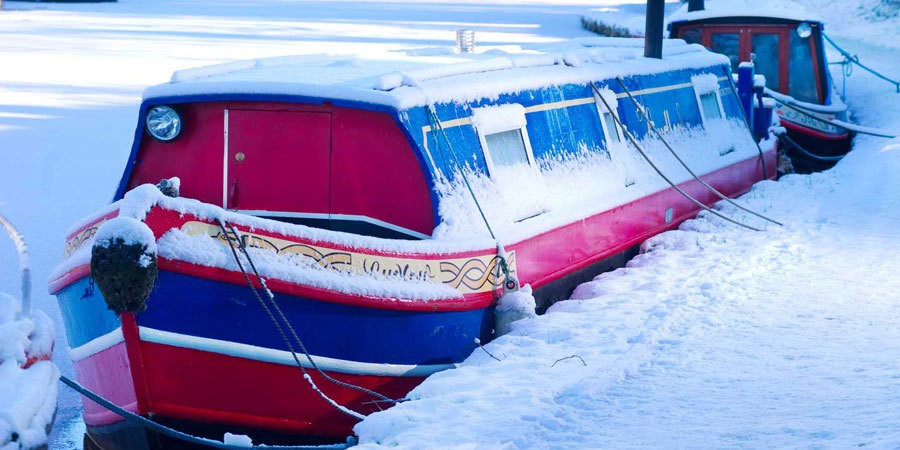 Locks to the River Thames

The tidal locks to the Thames are Thames Lock Brentford, Limehouse, Bow and West India Dock Entrance. Whether you're joining the Trust's waterways or leaving for the Thames, there's important things you need to know. Please find information for 2016 on our website.

The Regent’s Canal at Lock 3 (Kentish Town Lock): We’ll be replacing the lock gates and so the lock will be closed from 4 January to 11 March.

Bridge 55, Dobbs Weir Lane Bridge, Lee Navigation: Essex County Council will be replacing Bridge 55, Dobbs Weir Lane Bridge. This will see night closures of the waterway and temporary closures during the day. A towpath diversion will be in place. Cyclists are asked to dismount. Please follow the signs. Works started on 20 July 2015 and will continue into 2016. Next night closures are from 22 January for three nights, and then from 27 January for two nights.

Bridge 33 (railway bridge) to Lock 4 (St Pancras Lock) on the Regent’s Canal: From 18 May and until early 2016, towpath works will mean that the towpath to the east of Bridge 33 and for approximately 70 metres will be replaced by a pontoon on the water. For safety reasons, we ask that there should be no running or cycling on the pontoon. Navigation should be with care and with particular attention to oncoming boats.

Limehouse Lock, Limehouse: The lock will be closed from 8 February to 11 March (inclusive) for repairs to the seals. For other locks to the Thames see our website.

ARP Gates along the Paddington Arm: Gates were installed at various points on the Paddington Arm to control the risk of flooding in the event of bomb-damage to the cut during an air-raid. Divers will be inspecting the condition of the gates from 25 January to 1 February 2016. The navigation will remain open but there may be delays of upto 30 minutes.

Maida Hill Tunnel to Lisson Grove Bridge, Regent's Canal: There is no towpath through the Maida Hill Tunnel and pedestrians and cyclists use local roads and footpaths to rejoin the canal. Contractors from UK Power Networks and the National Grid have now closed the towpath between the eastern tunnel entrance and the next bridge (Bridge 2, Lisson Grove Bridge) while they make urgent repairs. This means that pedestrians and cyclists are asked to follow the signs and leave (or rejoin) the towpath a little earlier (or later) than would usually be the case. We are continuing to investigate opening this as soon as possible.

Towpath from the Hertford Union Canal to the Regent's Canal: Demolition and construction work at Bow Wharf will see the towpath closed where the Hertford Union Canal meets the Regent's Canal. There will be signs directing pedestrians and cyclists to leave the towpath and to use Old Ford Road if they wish to move between these waterways. A further option would be to take routes through Victoria Park. Work is expected to last from 23 November to 30 April 2016.

Towpath north of Bow Lock, Lee Navigation: The Queen Elizabeth Olympic Park are developing The Leaway: a new continuous walking and cycling route connecting the park to the River Thames and Royal Docks. Works on the towpath north of Bow Lock on the Lee Navigation are due to start on 4 February and last until 15 June 2016. The pedestrian route will remain open but via a pontoon walkway. For safety, we ask that there's no cycling on the pontoon. The pontoons will mean that mooring will not be possible between Bow Lock and Bridge 2 (Gas Works Bridge) on the Lee Navigation. For further information on The Leaway, please visit the Queen Elizabeth Olympic Park's website.

You can receive email notification of our notices by visiting our website. We also tweet our notices from @CRTLondon.