The Camden Lock Open Weekend is very nearly here! Read this month's bulletin for all of the details, plus the Angel Festival, the Hayes Festival ... and ... Richard Branson's ducklings?

Cofferdam being installed in Camden

Be sure to come down to Camden for our huge open weekend event. Highlights:

4 September will also see the Angel Canal Festival, an annual event based around the Regent’s Canal’s City Road Lock and local streets in Islington. Attractions include stalls, a fun fair, live music, ‘have-a-go-at-canoeing’ sessions and bell-boat racing. The Trust will be there on Jena, come aboard and say hello!

A wonderful, wet, exciting and fun day for young and old to enjoy all sorts of activities around the Grand Union Canal in Hayes town centre. Take to the water on trip boats, paddleboards and canoes, try your hand at fishing, have your face painted, wander through the stalls or just sit back and enjoy some great food, dance and music by the waterside. All in all a splashing good time for all the family. Many activities are free! 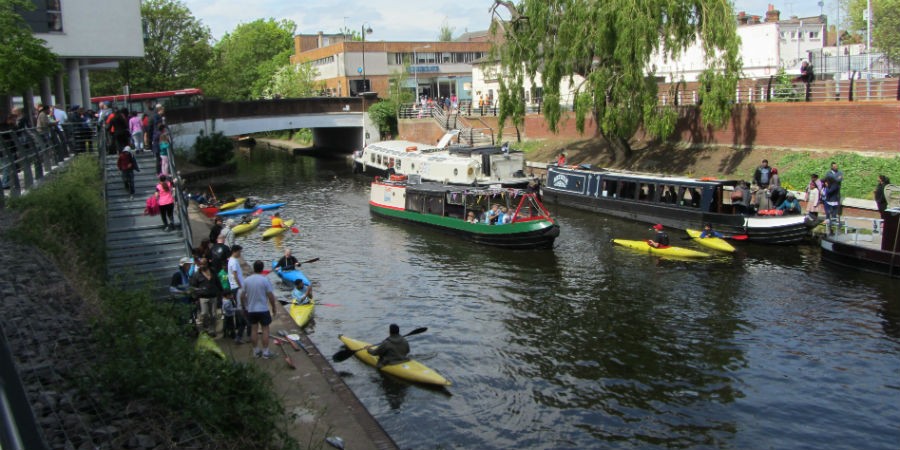 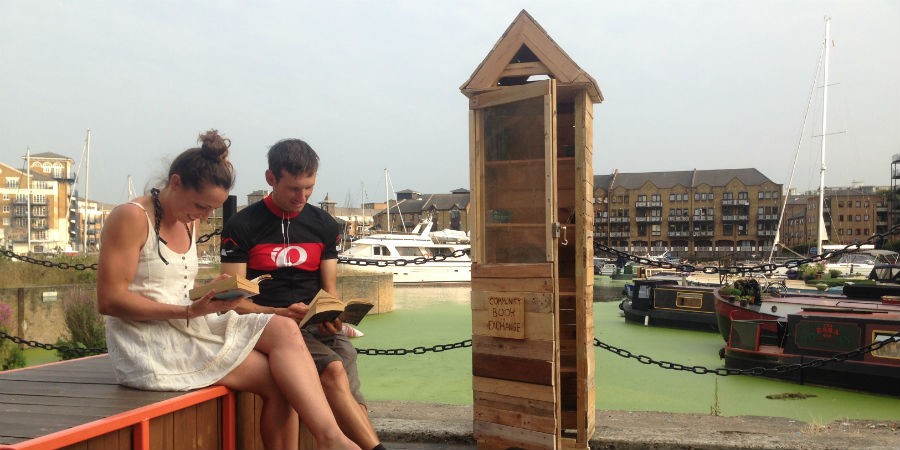 Richard and Christina built the little cabin using all recycled materials and it was secured in place on Thursday 18 August, with books donated by local residents. Within three days, all of the original books had been taken and replaced with new stock. If this is successful, we’ve identified other sites on the London Waterway where we’d like to introduce something similar.

Poetry on the Cut with Jo Bell

An intimate reading from Jo Bell, poet and former Canal Laureate will be taking place on 10 September aboard Freda, a beautiful traditional narrowboat, which leaves Kings Cross at 5pm and heads east through the Islington Tunnel.

Tickets cost £22.50. Poetry on the Cut is run by volunteers and does not make a profit. The price of your ticket covers the cost of the boat, its crew, the poet and Eventbrite’s fees.

A stretch of the Regent’s Canal from Little Venice to Camden has recently celebrated its 200th birthday. The two-mile section was formally opened on 12 April, 1816 and two centuries later, the Trust, the Friends of Regent’s Canal and the London Canal Museum marked the anniversary with a party at the Regent’s Canal Information Centre in Camden. Further events will be taking place over the next few years, watch this space!

The Virgin team, based at Paddington’s Battleship Building, contacted us for help with ducklings that hatched on their roof terrace but were then abandoned by their mother. Our Ross and Stewart came to the rescue and helped bring them to the canal.

Danny, a member of the Virgin team, said "Ross and Stewart came to our rescue and helped us to relocate them and get them into the safe wings of another mother duck. Great work and a lovely ending to our Virgin Duck Rescue."

Young people take to canoes to clear canal of rubbish

A group of young people from the Spotlight creative hub in Poplar have been helping to clear the Limehouse Cut of litter.

Working with staff at the Trust and and Moo Canoes, the dozen strong group collected 15 bags of rubbish.

The partnership between the Trust and Spotlight is a pilot project aimed at getting more young people involved with their local waterways, learning about the environmental importance of the water, as well as the activities and water sports it offers.  The litter collected by the young people, all aged between 16-17, included bottles, cans and two tennis rackets and a ball. They worked along a mile long stretch of the Limehouse Cut, from the basin to Bartlett Park.

If PokémonGO is your thing, make sure you check out the Regent’s Canal’s new PokéTrails. Gotta catch em all! 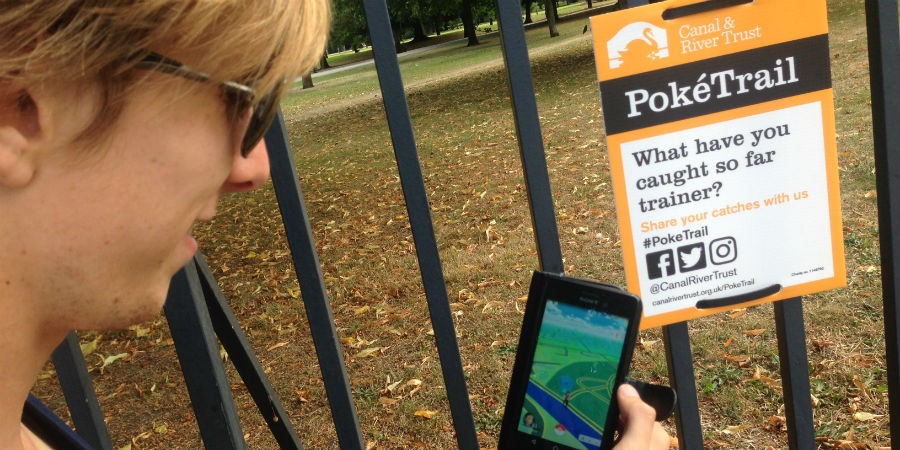 Next year the stadium island loop (Old River Lea, City Mill River and St Thomas Creek) will be open to public navigation at all times without prior booking. The only exception to this will be when closure is required for high profile stadium events. Waterworks River and Three Mills Wall River which runs adjacent to the loop will be accessible by prior booking only as it is a flood relief channel. We are currently developing a management plan that will help provide the level of staffing, maintenance and signage needed to make it a great boating experience, so watch out for this early next year.

We’ll have the details for our autumn London Waterway Forum in our next edition of this bulletin. But if you know you’ll be keen to attend, you can reserve your place by emailing: enquiries.london@canalrivertrust.org.uk.

Quietways are being established by Transport for London (TfL), the London Boroughs, The Royal Parks and the Canal & River Trust to create a network of quiet cycle routes throughout London.

These will link key destinations by following backstreet routes, parks, tree-lined streets and also our waterway towpaths. The routes will be quieter, low-traffic routes, creating a much improved environment for cyclists who want to travel at a more gentle pace.

A Quietway route is proposed along the Grand Union Canal between Paddington and West Drayton, bringing significant towpath improvements including better surfaces, wider paths, improved access points and more helpful signage, benefitting not only cyclists but the wide variety of visitors to our waterway.

As well as further information updates via our website, during October half term week (21 to 30) we will be holding open drop in sessions aboard our visitor boat Jena about the Quietway proposals. This will enable anyone to come and talk to us to learn more about the proposed improvements we will be delivering and the benefits it will bring to the Waterway, to provide feedback and to find out how to get involved. For any queries or comments in the meantime, please contact: Quietway@canalrivertrust.org.uk